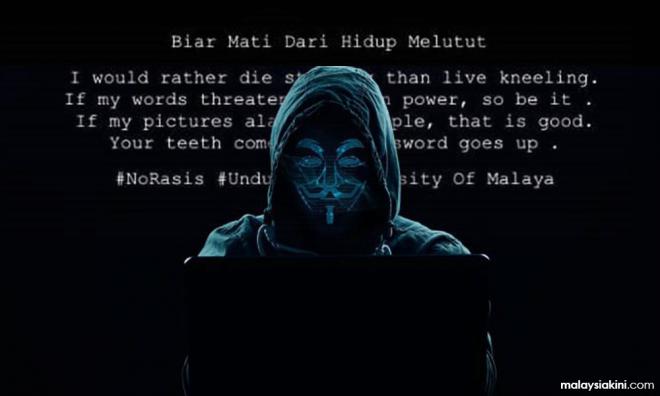 ‘MrX’, which claimed to be the hacker who yesterday dumped vast amounts of personal data belonging to University of Malaya (UM) staff, said the varsity is to blame for the data breach due to its lax online security.

“Guess who? Security is low.

“Don’t blame me. Blame UM itself for not prioritising security.

“Nothing is secure. UM (online) security is trash,” the alleged hacker or hacking team said on Facebook early this morning.

The posting also included the line “Biar Mati Dari Hidup Melutut (Better to die than to live on your knees)”, which was a line posted as part of a message about UM’s online e-pay link when it was first hacked on Thursday.

It was reported that a large amount of personal data of UM staff, login IDs and passwords had been leaked yesterday to an anonymous file-sharing site online.

This came several hours after UM claimed no data and information were affected by the hacking of its online e-pay link.

Also released were nearly 24,000 login IDs and hashed passwords, believed to be from UM’s e-pay link, which was reportedly hacked on Thursday.

In a later post, MrX, who earlier included links to the anonymous file-sharing sites on Twitter, said its account had been suspended by the social media platform, citing a violation of rules regarding publishing other people’s private information.

Meanwhile, activist Wong Yan Ke, who is under police investigation for holding an on-stage protest during his convocation ceremony at UM, denied any link to the hacking and data leaks.

Even so, he said the incident highlighted weaknesses in the varsity’s online systems.

“I do not know who is doing all this (but) I need to clarify that I am not involved in any kind of hacking.

“(However) This shows that people are against what the university had done.

“So I think this question is better answered by the university, not by me.”

Wong was speaking during a press conference at the university today after collecting his graduation certificate, which he claimed had been withheld by the institute. UM denies the allegation.

His lawyer Asheeq Ali then called on the university to explain how the hacking took place.

The latter said: “I think UM has to explain how their website can be hacked, how their staff data can be leaked.

“They are supposed to respond because it is their system.”

Malaysiakini has contacted UM for a response.