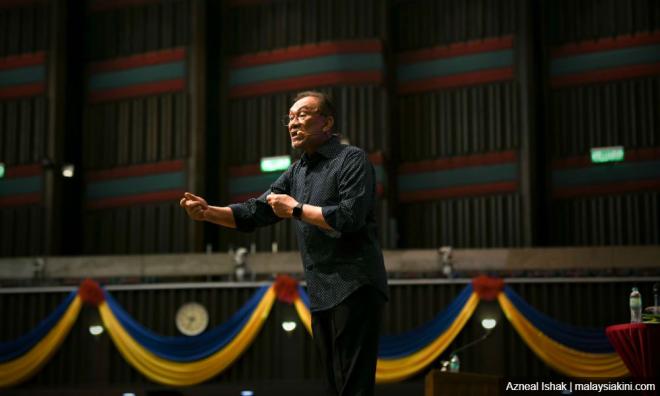 Others can 'dream' but PM transition process unshakeable, says Anwar

Anwar Ibrahim believes the promised transition of power between Prime Minister Dr Mahathir Mohamad and him will proceed as planned despite some wanting to supersede him.

In an interview with Turkish state broadcaster TRT World, the PKR president was asked about his deputy Azmin Ali purportedly wanting to become the next prime minister.

“It is not a crime for anyone to aspire to become the prime minister, but he has to enjoy the support of the majority (of lawmakers).

“And I think for now, until the meeting last week among party leaders, there is no consideration of any other name (for the PM post).

“People can dream, can aspire, but that does not mean you are going to shake or scuttle the process. And furthermore, it has been duly agreed and signed, so you have to then undo this process.

“There is no attempt or initiative to undo this,” he added.

Pressed if Azmin had specifically expressed his desire to be the prime minister, Anwar said he had not.

“The speculation comes from partly his quarters, some supporters but it does not really distract us from the main task of building up the economy [...],” he added.

The Port Dickson MP reiterated that he had no doubt that Mahathir would honour Pakatan Harapan's agreement and pass the baton to him.

In recent weeks, Azmin has been named as being part of a plot to form a new government sans Harapan component parties DAP and Amanah. The apparent plan is to ensure Mahathir serves the full five years instead of making way for Anwar.

This week, Azmin publicly backed Mahathir for a full term. He labelled those who attempted to reshuffle the administration within the five years as a “backdoor government”, stressing that Harapan had never fixed a time frame for the power transition.

No need for Sedition Act

During the interview, Anwar was asked if he would repeal the Sedition Act 1948 when he ultimately becomes the prime minister.

He expressed his “commitment” to doing so but also highlighted potential challenges.

“This is a commitment that I made, the party made and it is clearly manifested in the manifesto of Harapan prior to the election.

“(But) we have a problem with the narrative, there are concerns by the Malays whether this would give an open gate for people to just abuse Malay positions or the (Malay) language or the royalty.

“I don't believe (the narrative is) true because there are enough laws against libel or sedition. So you don’t need to resort to these draconian measures,” he added.

Harapan had pledged to revoke the colonial-era law in Promise 27 of its manifesto for the 14th general election.

The government is reportedly working on dismantling the Sedition Act by transferring several provisions concerning the monarchy to the Penal Code.

Despite a moratorium on the law pending its review, the police continue to use it against activists.