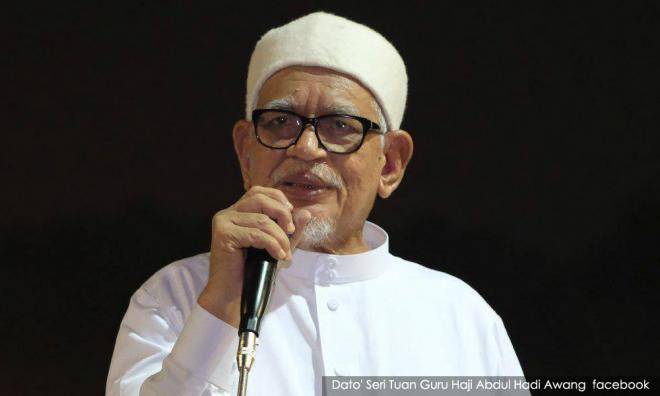 PAS president Abdul Hadi Awang today claimed the Malays in the country were victimised due to their own faith which has caused them to be labelled racists even as they try to champion their rights.

In a long post on Facebook this morning, Hadi lamented the same treatment is not accorded to other races in Malaysia.

This, he claimed, was a sign the Malays in the country were losing their rights “in their own land”.

“Other races which challenge the Malays and which speak on the rights of their races are not referred to as racists on the basis of human rights.

“Are Malays to be eliminated from the world and drowned in the slogan of the 'Malaysia Baru' race?” he posted.

He added: “[...] Malays accept this fate because of their Islamic faith. If Malays did not embrace Islam, just like the other races, they would not be labelled racists.

“Could this situation be caused by the Islamophobia disease that is currently spreading?”

Citing the history of Malaysia's colonisation to elaborate his point, the Marang MP said Muslims were the “biggest enemies” of the colonisers to this day.

As such Malays, too, have become their main enemy due to their faith and this led to their marginalisation prior to Merdeka.

“The humanitarian nature and preaching of all humanity brought by Islam allowed the Malays to easily accept the arrival of the Chinese, Indians and others by the colonisers who brought their agenda to create problems in the multireligious and multiracial community, to strengthen their grip on economic interests.”

This, he claimed, included placing Malays and other bumiputera communities in rural areas to rely on agriculture and away from the economic centres of the towns.

Hadi said the Malays were unable to catch up with the other races post-independence despite stipulations in the Federal Constitution to preserve Malay and bumiputera rights.

“Even though the Malays hold political power, they cannot easily influence economic changes in an atmosphere of political freedom and competitive economics that is unethical and undignified.

“The main problem is not racism, but their (Malay) rights seen to be dismissed by others in their own land,” his post read.

“What's more, the present situation which is being influenced by the party of an extreme race to gain political power which, to the eye, appears through democracy that is influenced by extreme racist behaviour and (which is) ungrateful to the deeds of the Malay-Muslims toward them.”

He said if Malays were truly racists, they would not have allowed the “bangsa pendatang” citizenships, economic control, political rights to become parliamentarians, menteri besar or chief ministers or the freedom to practice their religions.

However, he warned there were limits to the patience of the Malay-Muslims.

“Remember! Islam teaches Malays that patience has its limits. Only Malays that are too stupid and weak spiritually or who have lost the soul of their race lose their identity in their own land.”

Even so, he said the congress had sought Malay rights that have been allegedly challenged and oppressed, without any show of enmity towards other races.