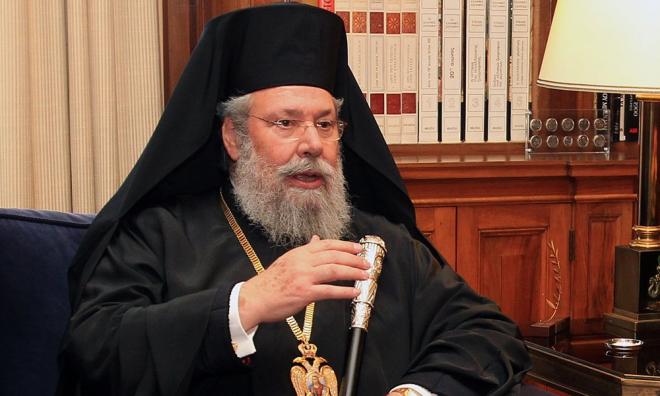 The head of Cyprus' Christian Orthodox church has distanced himself from the controversy over the granting of citizenship to fugitive businessperson Jho Low, according to news reports.

Cyprus Mail, citing another report from the Cyprus Broadcasting Corporation (CyBC), quoted Archbishop Chrysostomos II denying he had a personal interest to recommend Low to be granted citizenship in September 2015.

Shifting blame from the church, the archbishop said his letter to then Cyprus interior minister Socrates Hasicos was written on the request of a private developer.

"He (the developer) told us he was building mansions on the land bought from us (the church)," said Chrysostomos.

In order to fulfil the conditions set under the government-backed Cyprus Investment Plan, Cypriot-daily Politis on Sunday reported that Low bought an unfinished villa worth five million euros (RM23 million) in Aya Napia on Sept 23, 2015.

In a front-page report yesterday, Politis further questioned Chrysostomos' alleged role in fast-tracking Low's citizenship by making a direct appeal to Hasicos as the minister-in-charge.

The report also claimed the archbishop informed Hasicos that Low (photo) would be in Cyprus on Sept 18 and would be available for a meeting to discuss potential investments on church land.

Hasicos yesterday called for Low's citizenship to be revoked if it was proven that the Penang-born financier had committed any crime.

Taking to Twitter, Hasicos said when the approval was given during his time, the Cypriot police informed him that Low had no criminal record.

Commenting further, Chrysostomos told CyBC that the developer gave him three names to promote for citizenship and the church is unaware to whom citizenship was granted.

Chrysostomos also said the responsibility for granting citizenship lies with the state authorities, although the church can promote certain individuals.

"It is done for the good of Cyprus. It is not up to us (the church) if citizenship will be given, we are just asking," he was further quoted as saying.

The archbishop revealed Low also donated 300,000 euros (RM1.38 million) to the theological school during a visit to Cyprus.

The US Department of Justice believes that at least US$4.5 billion had been misappropriated from 1MDB and is working with Malaysia to recover the funds.