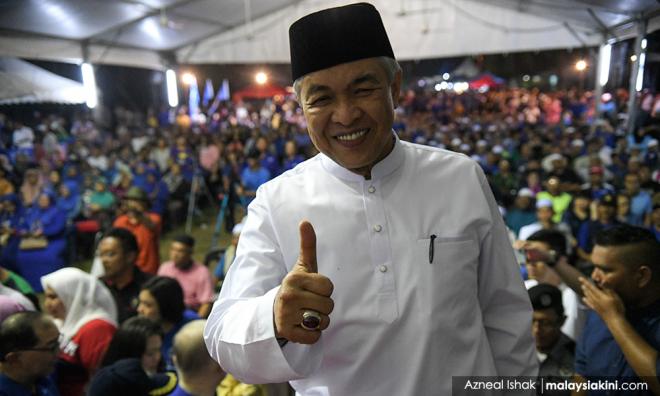 YOURSAY | 'He is campaigning for a Chinese candidate by running down the Chinese.'

Constitutional Supremacy: Luckily, magistrate Siti Hajar Ali, who released driver Sam Ke Ting from a charge of reckless driving that caused the death of eight teenage cyclists in 2017, is a Malay.

It is hard to imagine the racist extent Umno president Ahmad Zahid Hamidi would have gone in his speech while campaigning in Tanjung Piai had the magistrate been a non-Malay.

By inferring that Sam’s acquittal was racially motivated, Zahid implied that the magistrate was corrupt.

This is a serious contempt of court. It is also seditious. Pakatan Harapan must not remain silent over Zahid’s comments.

Please lodge police reports. Otherwise, Harapan will have no one but itself to blame for allowing this kind of ugly extremism to spread unchecked.

Harapan just needs to see how BN is constantly lodging reports against the former’s comments and deeds.

Just recently, Wanita BN lodged a police report against Amanah deputy president Sallahuddin Ayub over something that he had spoken behind closed doors. Their aim is to create a negative perception of Harapan and police reports will help to publicise it.

Harapan, where are your police reports against racist speeches by the opposition, especially by Umno and PAS leaders?

Gaji Buta: Yes, the problem is that Harapan leaders do not capitalise on these racist or seditious statements by the opposition party leaders.

Instead, they try to win elections by stating how they have reduced corruption, settling national debts and all sorts of other things which do not increase the voters’ pulse by even a single beat.

Meanwhile, BN and PAS leaders really know how to work the public into a frenzy. Therein, lies the problem.

PB: I am against the current trend in the country to rush and file police reports over every single slight, but Zahid should be reported for contempt of court.

In his speech, the Umno president had brought the Malaysian judiciary system into disrepute.

Cognitis: Indeed, Zahid should be charged with contempt of court. Does he seriously think Attorney-General Tommy Thomas has control over the judiciary?

It frightens me that a person with such a mind used to be Malaysia’s deputy prime minister.

Another Comentar: There are leaders in Umno, especially those facing corruption charges or facing financial distress since losing in the last general election, who are now prepared to plunge the whole country into strife in order to save themselves and return to power.

These leaders, who will not hesitate to utilise race and religion for their own vested interest, are not short of supporters.

What is more worrisome are signs that even the ultras from within the Harapan coalition are aiding and abetting this destructive pathway to push Malaysia to a monstrous abyss.

Jaded: The Umno president’s speech can only be described as despicable and deplorable.

Accidents happen and nobody wanted it to happen, especially when it involved the deaths of teenagers. It's a disgrace for Zahid to use the event to score political gains.

Gerard Lourdesamy: Zahid's statement would suggest that under the previous BN regime, the courts, Attorney General’s Chambers and police were under the thumb of Putrajaya, and that all the three branches had to follow the orders of the government based on sentiments and not the law.

The acquittal of Sam in the accident case was due to a lack of evidence to prove beyond reasonable doubt that the accused caused the accident which resulted in the deaths of the cyclists who happened to be on the streets at such an ungodly hour.

Why should the race of the accused and the victims be a factor in the case?

The baying for other races’ blood, as being suggested by political leaders, is a disgrace and only confirms the racist and fascist narrative of the parties to instil hate and suspicion, and to effectively control all the organs of state power to further that unholy agenda.

Quo Vadis: Why is Zahid not being charged for casting aspersions on the judiciary process? He cannot plead ignorance, having been the former deputy prime minister as well as former home minister.

While Zahid and the other erstwhile leaders, their cohorts and political partners spoke of the importance of unity, they made holes in the delicate fabric of peace and harmony by making racist speeches.

Bereft of any principles, moral or even secular, and bankrupt of any progressive ideas, these leaders mouth their racist and religious orientations with abundance, and impunity.

Does freedom not mean your right to swing your arm and my right not to have your arm hit my nose?

Worried Sick: The magistrate found the driver involved in the accident not guilty and gave her reasons for acquitting the suspect.

If Zahid has any sense, he should request the authorities to appeal the case at a higher court. That is the right and reasonable thing to do.

During an election campaign, bringing up such a matter like the accident case verdict is not the right thing to do, and to provoke racial tensions is a criminal offence. Zahid should be investigated for his racist talk.

Anonymous 122244: The inspector-general of police must give a stern warning to Zahid for promoting hate speech. His kind of political approach is very bad for Malaysia.

It is shameful for MCA to share the same stage with this racist politician and work alongside the political parties which promote such attitudes.

Citizen Zero: Umno must reform. The new wave of good, or at least better human beings, of Umno people must come up and take over.

We need a good and quality opposition to keep the government on their toes. We need good political party leaders who always talk about how best to manage the country for the betterment of all. We need politicians to always talk about work and do work.

Not arrogant liars who are desperate for power to do nothing but oppress people and steal their money.

Giant Pygmy: So, Zahid is campaigning for a Chinese candidate by running down the Chinese. Smart fellow, isn’t he?

After this, it is perhaps best for BN to keep Zahid away from the campaign trail.

Z Naik: Just when there appeared to be a glimmer of hope for the MCA candidate Wee Jeck Seng to win the Tanjung Piai by-election on Nov 16, Zahid had to put his foot in his mouth.

The former deputy prime minister confirmed that all of BN’s talk about multiracial acceptance and tolerance were just empty promises.