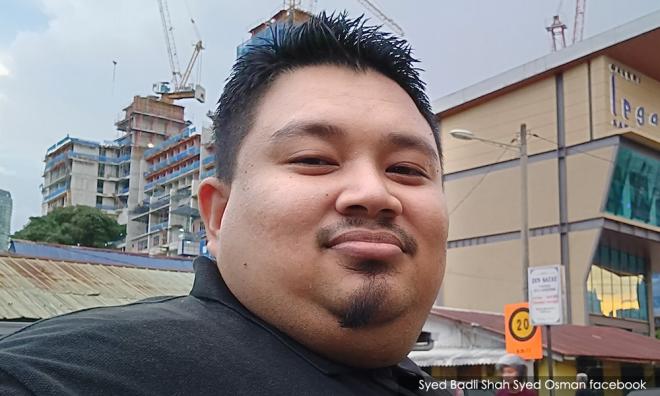 The controversy over the opening of this year's PKR Youth Congress shows no sign of abating as the movement's vice-president Syed Badli Shah Syed Osman accused its deputy Muhammad Hilman Idham of failing to attend a crucial meeting at which the decision was made.

Syed Badli (above) maintained his claim that Youth Wing sent an official letter on Sept 11, 2019 inviting the party's deputy president Azmin Ali to open the Congress.

"However, up to the date of the exco's monthly meeting on October 20, the secretariat had not received any official response from the deputy president," he said in a statement today.

According to Syed Badli, Hilman (above) as PKR's deputy youth chief and political secretary to Azmin, should have been aware of this and acknowledged his mistake, and attended the meeting on Oct 20 but skipped it and did not provide an explanation.

"Hilman should have been aware and admitted that Azmin had failed to respond in writing to the Congress opening invitation until Oct 20, 2019.

Syed Badli said that there was a 39-day period without any official response until the last PKR Youth committee meeting last month.

"Hilman himself failed to attend that meeting to clarify that he had the capacity of PKR's deputy youth leader and political secretary to the deputy president," he added.

It was at that meeting that the Youth committee decided to extend the invitation to party president Dr Wan Azizah Wan Ismail (below) instead.

Hilman yesterday denied that the letter was not responded to, saying Azmin had replied.

"If he did not respond to the letter, then why the need to cancel the invitation? This shows it (the allegation) is a lie," Hilman he said.

Yesterday, Azmin claimed that there was an attempt to prevent him from reprimanding the current party leadership.

He described the move to rescind the invitation to him to officiate the PKR Youth national congress as unprecedented.

"By convention, all political parties provide the space to their deputy presidents to officiate the congress of the Youth and Women's wings. This has been the practice for several years."

In response, PKR Youth chief Akmal Nasrullah Mohd Nasir said Azmin was the real "hidden hand" destroying the party, citing the latter's failure to attend any of the party's leadership council or political bureau meetings over the past year as a reason.

"Instead, he often issues statements which violated party discipline and the Pakatan Harapan spirit," said Akmal.