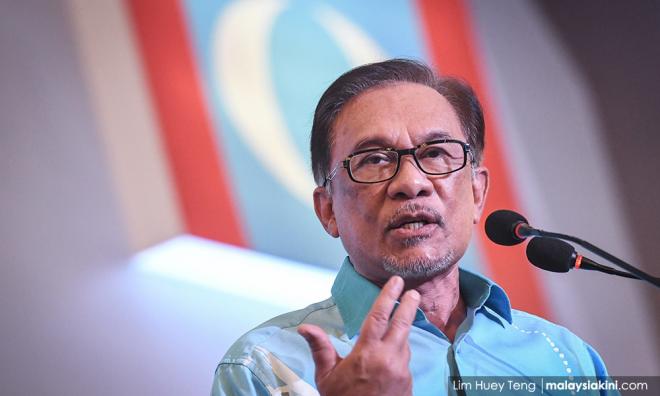 Anwar warns of those outside, inside waiting to see PKR weaken

Anwar Ibrahim claims there are those waiting to see PKR weaken, which would in turn render him unqualified to become a leader.

According to the PKR president, this included certain individuals within the party as well, whom he did not name.

“Not only outsiders but also those within are waiting to see us grow weak.

“(They believe) When we are weak, Anwar will be threatened and Anwar will not be qualified to become a leader,” he told the Perlis and Kedah PKR joint convention in Kulim this afternoon.

PKR has been rocked by protracted infighting between the factions aligned to Anwar and deputy president Azmin Ali.

This intensified after the last general election amid speculation that Prime Minister Dr Mahathir Mohamad preferred Azmin as his successor despite an agreement to pass the baton to Anwar.

At present, the factions are crossing swords over the cancellation of Azmin's invitation to officiate the PKR Youth national congress next month, which the party number two claims is an attempt to silence him.

Meanwhile, Anwar said he does not feel threatened and downplayed the seriousness of the internal rift, blaming the media for playing up the issue when the reality on the ground is different.

“If I feel threatened, others would also fall.

“But remember, what is important is that I do not feel threatened. There are one or two differing opinions. Although I think, they are not following the right ethics,” he added.

Anwar also reminded his audience not to elect leaders who can offer rewards because this would cripple PKR.

“There are those who say Anwar is president. He comes out of prison, but what do we get?

“I am not a minister now. I have told Tun (about our understanding). He becomes PM, I will support. I do not want any government positions.

“When my turn comes (to become prime minister), I know how to do my work. I am not disturbing anyone at the moment,” he added.

Anwar also insisted that the Sarawak PKR convention should proceed as planned following its chairperson Baru Bian's threat to cancel it after the invitation to Azmin was rescinded.

“We heard that the majority of branch leaders want the convention to continue,” he added.

In a strongly-worded statement yesterday, Baru said the cancellation of the invitation to Azmin was a violation of party tradition and democratic principles.