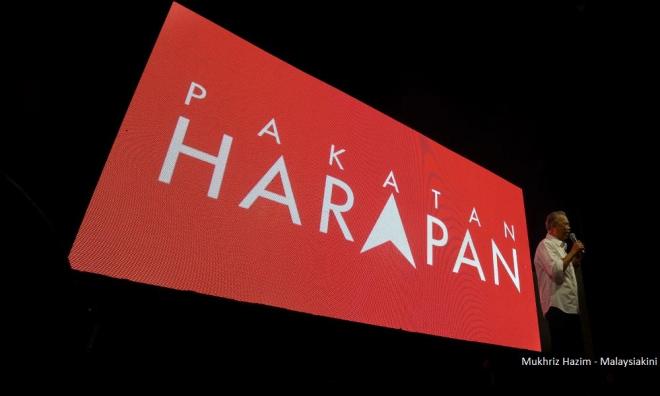 YOURSAY | 'You can only lose those who entrusted you, and not gain those who did not.'

Vijay47: This is the best loss that anyone could hope to win.

Malaysiakini is deemed to be the citadel of Pakatan Harapan supporters yet ironically, paradoxically, to a man everyone seems to be celebrating Saturday’s massacre at Tanjung Piai.

All are unified in attributing the trouncing that Harapan got to the arrogance and disdainful disregard that one man displayed. The blame rests fully on Prime Minister Dr Mahathir Mohamad’s head.

The people have clearly spoken – betrayal will never be tolerated, even from erstwhile heroes. Let the massive loss be a lesson to all, including fellow travellers in Harapan and especially DAP.

If you remain silent and weak, if you remain pet poodles eager to roll over and play dead in the face of continuous injustice and abuse, you too will soon enjoy the same fate.

But let us also consider the glass half-full. Umno-PAS will steer clear of Mahathir as they will now see him as a fading remnant as relevant as last week’s news, bringing an end to that tradition of frogs jumping the fence.

Harapan members will become more assertive, and DAP leader Lim Guan Eng had better watch it – he may realise that his pathetic approach of using the Treasury to buy over the Malays has fallen flat, even as it earned the non-Malays’ contempt.

The opposition also will see that fairy tales do not always last happily ever after – who knows, even MCA’s Wee Jeck Seng may realise that the writing on the wall could one day feature his name.

MS: A tragic outcome for Harapan? No.

It is a bitter pill forced down the throat of the sick and ever-mendacious Mahathir, whose political quackery now lies exposed – his embrace of the vile contagion called Zakir Naik, his weaponising and wielding of khat in a despicable show of ‘ketuananism’, his retooling of PDRM and MACC to serve his politics of division and hate, and his desperate gathering of ‘baruas’ on Oct 6 to further spew his ‘orang asing’ poison.

But if it is indeed a tragic outcome for the mischief-makers in Bersatu, I'm sure there are some in there who now privately view the Oct 6 gathering as something of a Shakespearean tragedy with an overreaching tragic hero whose hubris has finally tipped the scales.

Perhaps now, Mahathir's resident propagandist, Rais Hussin may be moved to write a Malaysiakini column titled ‘Unintended consequences of race-baiting after May 2018’.

MVA: If anyone doesn’t know why the people have rejected Harapan after only last year voting them in with a thumping majority, then they should not be in politics.

Harapan was expected to rise above religion and race but the bulk of the leaders, being ex-BN, are unable to change. And the biggest culprit is Mahathir.

He could have changed the course of Malaysia but chose to go back to his old ways. The ‘terrorist’ preacher being giving asylum here, and treated like a VVIP, the Tamil Tigers fiasco, Chinese education issues, road tolls, non-repealing of bad laws, kleptocrats running free, etc, just show that Harapan has no intention of changing the course for Malaysia set by 60 years of Umno rule.

I fear things are going to get, worse seeing the Perak MB issue and bringing in of teachers from Saudi Arabia. God save Malaysia.

Pelanduk: The main issues that made the Chinese and Indians switch camp are not the fulfilment of the manifesto, but the khat issue, the cutting of funds to Tunku Abdul Rahman University College (TAR UC) and the refusal to extradite Zakir Naik to India.

At the outset of the announcement of impending implementing of khat, the Chinese and Indians were protesting against it, and yet Mahathir and Education Minister Maszlee Malik saw it fit to go ahead, though with a scaled-down version.

Then came Finance Minister Lim Guan Eng’s reduction of funding to TAR UC. The Chinese have no issues with the educational institution’s partnership with MCA, as long as their children could get an education, especially the poor ones. Lim was vindictive but when it came to protesting against khat, he was not that vociferous.

Lastly, it involves the sheltering of Zakir Naik. It is mind-boggling that Mahathir sees it fit to keep him despite a request from India to have him extradited. And it is even more ridiculous to do so after he had insulted Chinese and Indian Malaysians.

I am sure all the Indians and Chinese are upset over these issues. Moreover, the question uppermost on every voter's mind was, what are the DAP and PKR leaders doing in the cabinet? Despite their greater number, they are being led by the nose by Mahathir.

Big Data: What has Mahathir not done against Harapan? He plotted with the opposition, was the key speaker at the racist Malay Dignity Congress to which, Anwar Ibrahim, the next PM, was not invited.

He dragged Zakir Naik, the fugitive from India, into Malaysian politics, allowing him to talk against the Indian and Chinese citizens of this country and against the elected DAP leaders, and unnecessarily targeted DAP with Liberation Tigers of Tamil Eelam (LTTE) arrests.

He continuously played his trademark race card and heightened racial tensions when he should have focused on the dwindling economy.

If he stays on, he will destroy Harapan. Just ask him to leave immediately, otherwise, expect the same defeat at the next GE. Amputate the ‘Maha-gangrene’ before it consumes the entire Harapan.

The Third Man: Tanjung Piai is like Harapan’s Waterloo. Even though this defeat was predicted, it’s not the end but the beginning for real change and reform.

Much of the reasons for the defeat has been highlighted and it’s not hard to see the elephant in the room is Mahathir.

From being widely admired, he became hated and scorned by many for his actions on Zakir Naik, the Malay Dignity Congress and the power transition to Anwar. Needless to say, such actions lead to dissatisfaction and disillusionment for all who have fought so hard for Harapan’s victory in GE14.

Whether it was done intentionally or otherwise to prop up his party’s and/or his own standing, it caused collateral damage to his Harapan partners.

Mahathir has created a huge trust deficit through his words, deeds and actions. The only honourable thing left to do is to step aside for Anwar to lead the charge for reforms in a New Malaysia.

Doomsayer: Indeed, Bersatu is the black sheep of Harapan. Mahathir should apologise to Harapan and accept responsibility and step down immediately and let Anwar take over. Otherwise, Harapan will lose in future elections as the Chinese will punish Harapan.

Don’t think the Chinese Malaysians are not important in elections. BN should also take note that without Chinese support, they will also not be able to win GE15.

Rabu: Stop playing cheap race and religion politics. Be sincere, brave, fair and progressive. You know who you have to dismiss as these people are divisive, instead of unifying.

Unfortunately, those with no - and embarrassingly backward ideas - have to also go. Be quick as time may not be in your side. You must retain the hearts and minds of the Malaysians who voted for you.

Most people can see what's good for them and when you produce good results, others will have more faith in you and will eventually be won over. Work and deliver and don't resort to just trying easy ways with cheap politics.

Malaysians are not stupid. You can only lose those who entrusted you and not gain those who did not. Malaysians want a fair and progressive country, which we can be proud of. And this is one of the reasons Harapan won GE14.

Wishing the best to Harapan, BN or any other who can deliver this for the good of Malaysia.

Yoursay: Now Anwar must step up to fight BN's 'extremism'