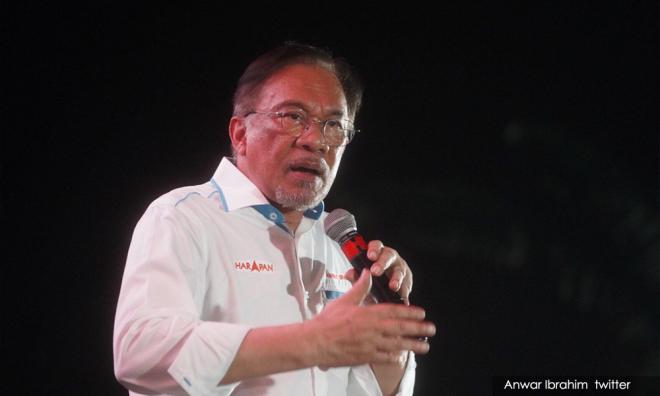 Yoursay: Now Anwar must step up to fight BN's 'extremism'

YOURSAY | 'Harapan dug its own grave by abandoning its vote base for a vote base that is fed on 'dedak'.'

Newday: PAS leader Abdul Hadi Awang has come out and proclaimed loudly that Tanjung Piai was a vote against extremist politics in favour of his disingenuous 'Muafakat Nasional'.

PKR leader Anwar Ibrahim, you know - and every other open-minded person in this country knows - that Hadi is an extremist. He is changing the rhetoric that open-minded people are extreme.

While the current government does bleat out the occasional warning against Hadi's dangerous and divisive rhetoric, it is plainly not enough to turn the tide against this.

Even the government has become religious. There has been no change to the mindset of the various state and federal religious authorities.

Anwar, you started this foray of religion (Muslim Brotherhood-style) into our education and society back in the early 1980s and you must end this for all our sakes.

You must stop this pussyfooting around the extremists and show a new, more moderate and definitely more inclusive political direction.

Otherwise, come GE15, whenever that may be, this country would be heading down a rapid road to a dystopian society. Is that what you and others currently in power really want?

I suggest no. Look to how this issue is being currently dealt within Indonesia. They know this is the biggest issue of all and they are actively cutting off this dark extremist snake. Learn from this.

Otherwise, all the open-minded people will slowly but surely either be persecuted out of the country or just leave.

We will then end up with Malaysia being the capital of the world for Muslim (read: Arab) intellectualism and academia guarding over a flock of close-minded and compliant citizens.

Quigonbond: Anwar is being very polite. The verdict is clear. It's a rejection of Prime Minister Dr Mahathir Mohamad.

Yes, Malaysians are grateful he got rid of a kleptocrat. But he's failed to take the country forward to be a more just and equitable society. He has danced to the tune of race and religion because it is advantageous to Bersatu, not to Malaysia as a whole.

Mahathir and Bersatu have two choices. They can continue deluding themselves that the Chinese will never turn against Pakatan Harapan by GE15, that this is just a by-election; or they should be deeply concerned about the need to change course.

I hope it is the latter. Don't let this be an excuse to becoming even more racial and religious in their outlook. If people wanted that, and "people" here include Malays, they would simply have continued with BN.

Anonymous 350791436750385: Anwar, you do not need to go back to the drawing board. Read the comments in Malaysiakini. Most of the answers are here.

If the old man stays on, Harapan will continue to lose every single by-election big time. He was good in winning the battle against BN but horrible in ruling Malaysia because he just cannot get rid of his racial streak.

He is cancer in Harapan and has antagonised lots of people who supported him, especially those whom he called ‘orang asing’. He was born a racist and will die as one. Nothing can change this fact. It is about time you kick him out.

VP Biden: Study the results of the Tanjung Piai by-election? Indeed, just study the comments here in Malaysiakini. There is no need for strategists such as Lim Chin Tong and Rais Hussin.

Harapan dug its own grave by abandoning its vote base for a voter base that is fed on ‘dedak’ by listening to the Bersatu imbeciles. Instead of implementing much-needed reforms, Bersatu kept creating more irrelevant issues.

The bottom line - Bersatu is not a team player. Dump Mahathir and take over, Anwar. And bring back our heroes, Rafizi Ramli, Nurul Izzah, Tony Pua, etc, to the forefront, not Syed Saddiq Syed Abdul Rahman, Maszlee Malik, Mohd Redzuan Md Yusof and the likes.

The rural economy is running on empty; the people there need money. Finance Minister Lim Guan Eng must channel money into these areas. They don't want to hear him whinging about Umno calling him a racist, as unfortunate as it sounds.

Full stomachs and no race and religion issues, and you will win.

Kural: Anwar can’t claim to be an objective observer and critic even to his strong supporters. He is partly to be blamed for the increasing decline of Harapan.

After the royal pardon and his parliamentary election, he could have played a more proactive and important role in governance. He primarily stayed in the margins, constantly self-declaring that governance power will be bequeathed him.

And meanwhile, the mandate given to Harapan for his struggles for some 20 years was being undermined by the very individual reputed for his decline in the first place.

Fair Play: I am not shocked by the Tanjung Piai by-election results. I am actually very happy.

Anwar, now the rakyat have given you a clear notice as to what you must do as soon as possible to honour your pledge to them. You have to take a stand and make a firm decision for the Harapan coalition.

Umno might be a very formidable enemy. But it is because the people now have a choice – that is, to play both sides, courtesy of Mahathir.

Anonymous_b3cdcd05: Yes, there is nothing shocking in the results of the by-election. This was deliberately done by the Tanjong Piah voters to teach Harapan a lesson.

Just speak to anyone on the street. Even an idiot will tell you what is wrong with Harapan.

What have you fellows done, other than squabbling among yourselves and sucking up to the old coot? You fellows in Harapan are behaving like the three monkeys - deaf, dumb and blind.

Harapan officials are totally intoxicated with position and power, they would dance to the rubbish dished out by the 94-year-old who is way past his shelf-life.

The people are worse off under Harapan, especially with all the race and religion manipulation at play. This is the age of social media. People are not fools as you think.

Ranjit Singh Malhi: Anwar, the rakyat is now depending on you to step up and lead the nation towards the glorious vision of creating a truly united, meritocratic and progressive Malaysia.

Anonymous_5a309591: Harapan lost a lot more Chinese and Indian votes - and the racist pandering to the Malay and religious extremists did not increase their Malay support base either.

A simple lesson - when you win, carry out the agenda of those who elected you. Trying to win the opposition over with policies to please them is stupidity and dishonest to those who put you into power.