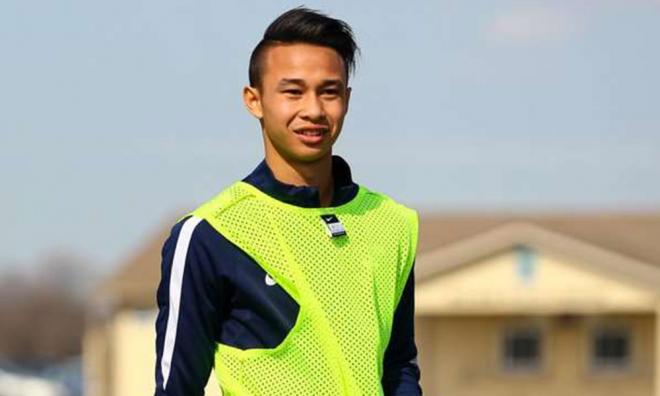 United States-based Wan Kuzain Wan Kamal has been dropped from the national Under-22 football squad for the Philippines SEA Games because of documentation problems.

The Football Association of Malaysia (FAM) in a statement today said the documentation problems faced by the Carbondale, Illinios-born Wan Kuzain (above) could not be resolved before the registration deadline today.

Wan Kuzain, 21, who represents Sporting Kansas City in the United States Major League Soccer, was reported to have returned on Nov 17 before joining the national under-22 squad’s centralised training at the Subang Jaya Municipal Stadium a day later.

His documentation was expected to take at least two weeks to complete.

National under-22 head coach Ong Kim Swee admitted that the team would miss the services of Wan Kuzain.

“During training he showed he could combine with the other players. But we have several players to fill the vacancy left by him,” he told Bernama.

Kim Swee has retained seven players from the squad who won silver at the 2017 Kuala Lumpur SEA Games, including Johor Darul Ta’zim (JDT) defender Adam Nor Azlin, 23, and Kuala Lumpur defender Muhammad Irfan Zakaria, 24, who filled the quota for two players over the age of 22.

Malaysia is drawn in Group A, and will face Myanmar on Nov 25, the Philippines on Nov 29, Timor Leste on Dec 2, and Cambodia on Dec 4 in their group matches.

Defending champions Thailand are in Group B with Indonesia, Vietnam, Laos, Singapore and Brunei.

The three venues for the football competition are the Rizal Memorial Stadium in Manila, Binan Stadium in Laguna and Imus Grandstand and Track Oval in Cavite.

The top two teams from each group qualify for the semi-finals on Dec 7, with the bronze medal playoff and final scheduled for Dec 10, one day before the closing ceremony of the games.