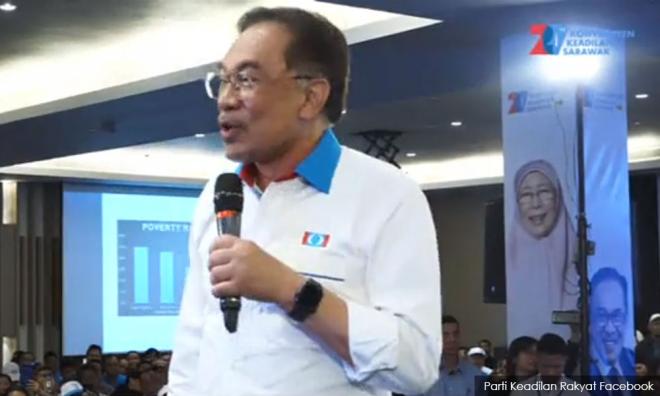 PKR president Anwar Ibrahim has urged Sarawak PKR to set aside any differences and focus on winning the next state elections.

In his opening address at the Sarawak PKR state convention, Anwar also urged members to ignore isolated voices of discontent and unite to face the 12th state elections which must be called before Sept 7, 2021.

"I don't want to respond to one or two criticisms," he told the reported 1,000 over delegates gathered at the Pullman Miri Waterfront hotel.

"My interest is to make sure that Keadilan remains strong and continues to champion the rights of all Sarawakians."

Anwar reminded the delegates how PKR was founded on the principles of democracy, and, therefore, decisions - including on candidates to be fielded in the state election - should be made in a democratic manner

"As long as I am president I will never compromise on this principle," said Anwar who flew in from Kuala Lumpur this morning and left shortly after his speech to attend a Pakatan Harapan presidential council meeting in Putrajaya.

In terms of candidates selection, Anwar said he will respect any decisions made by the state leadership.

"But I must make sure that you decide in the interest of all," he stressed.

"This is my assurance: I have told the political bureau, 'the state must call for a meeting of all divisions and request for written recommendations'.

"Discuss these recommendations at state-level and raise it to the central committee... if there are any issues, call up the division to discuss," he said.

As PKR president and chair of the party's political bureau, Anwar said he will only sign the final appointment letters after ensuring that these processes had been carried out.

"Sarawak will decide (their candidates) but the process must be through adequate participation," said Anwar, who also urged for engagements to be carried out with state NGOs.

The biennial convention today had proceeded with Anwar's blessing after an initial ultimatum by Sarawak PKR chief Baru Bian that it would be cancelled.

Anwar, however, reassured the delegates he would personally resolve any friction at state and central level.

"I appoint the state chiefs so there is no reason for me to be unable to discuss with them," he added.

The Borneo Post reported that among PKR division chiefs present include Abun Sui Anyit (Hulu Rajang) and Roland Engan (Baram) who had on Wednesday reportedly given their support to Baru.

An aide to Baru confirmed that the works minister was not present during the state convention today.