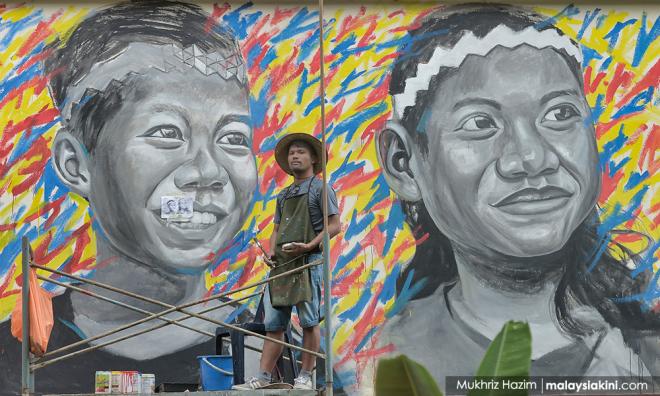 MALAYSIANSKINI | Eleven-year-old aspiring doctor Akma Mamin is delighted to learn that her portrait will soon adorn the outer wall of her classroom block, for all to see.

Beside her is Heriziman Herman, who has just finished his UPSR. He, too, beams at the idea of a giant painting of his face remaining long after he graduates from primary school.

The Temuan-Semai teenagers are the subjects of artist Shahar “Shaq” Koyok’s mural at the Orang Asli school SK Bukit Lanjan.

A Temuan himself, Shaq is on a mission to push the Orang Asli to the forefront of public consciousness through his work.

The 34-year-old is most known for his arresting portraits. An example is “Age of Tomorrow”, currently on exhibition at Galeri Petronas. It depicts an Orang Asli woman against both a lush green environment and barren land littered with logs.

Then there's “Wild Eyes”, a painting of an Orang Asli man staring at the viewer squarely in the eye.

In “Witnesses” (above), he painted black and white portraits of six Orang Asli on mengkuang mats woven by his mother.

Also featured in the “Redtape” group exhibition at Galeri Petronas, KLCC (until Dec 29) the mats are hung around a tree stump with a chainsaw on top of it - a reference to deforestation.

In a recent interview with Malaysiakini, Shaq (below) said that he paints nothing but Orang Asli.

“Even though some have asked me to paint other things, I refuse.

“There are so many issues faced by the Orang Asli - logging, land grabs, highways, overdevelopment on native land, and oil palm plantations. These are the things I will paint. I want people to know that the Orang Asli are not OK with this [...]

“No dreamy pictures. I want people to be awake and I want to show them the real story,” he explained.

Expressive and excitable, Shaw shared in a mix of English and Malay how he grew up poor but content, in a one-room wooden house without electricity or running water.

He spent most of his childhood in Kampung Pulau Kempas, a Temuan village in Banting, southwest Selangor. His fondest memories are fishing in the nearby swamp and hunting small animals in the jungle.

In primary school, he discovered art, a passion which shaped the course of his life.

Shaq began painting portraits while living away from home in secondary school, encouraged by teachers who recognised his talent and commissioned him to do personal pieces. He gleefully recalled how he would be paid RM200 per portrait, which more than supplemented his meagre pocket money at the time.

Portraiture continued to help him earn a living when studying fine arts at Universiti Teknologi Mara (UiTM), itself a trailblazing achievement as he was the first Orang Asli from Peninsula Malaysia to do so.

Whilst doing his diploma studies at the Malacca campus, Shaq would set up his easel on street corners most weekends to draw portraits for tourists and passers-by.

The extra cash allowed him to expand his creativity into music and skateboarding, the latter of which has become a life-long hobby.

It was also at university that he learned to embrace his identity as an Orang Asli artist.

In the beginning, Shaq shared how some galleries were hesitant to carry or sell his work. Others advised him to paint more commercially appealing subjects.

He stood by his mission and eventually broke through in 2017 when his work was chosen to be part of the “Manah: A Living Legacy” group exhibition at Galeri Petronas.

He has since shown his work and staged solo exhibitions throughout the country, as well as in Melbourne, London and Miami.

Shaq believes that being a self-represented artist has afforded him the freedom to continue painting his topic of choice - Orang Asli portraits.

“I try to immortalise the image of a person in my artwork.

“So that the image of a person at that time, at the place, will live forever in my artwork and they will be able to tell their stories over and over again.

“Even if the person passes away or grows up or becomes someone else, the story is there. It is very important for the Orang Asli to have this,” he explained.

His thriving career aside, Shaq has also become deeply involved with the people and issues he paints.

A fixture at environmental justice events, he often gives talks and speaks at forums to highlight the Orang Asli experience with climate destruction. In September, he was among the hundreds who participated in the Climate Strike in Kuala Lumpur.

He is also the first Orang Asli to receive the Merdeka Award for his community work.

The award grant enabled him to travel abroad to study how Aboriginal Australians and New Zealand Maori used art to advance public awareness of indigenous culture and rights.

Shaq believes that his activism and art are inextricably linked as both stem from his fight to advance Orang Asli rights.

It was an extension of that belief that led to him volunteering to paint murals at Orang Asli schools, like the one of Akma and Heriziman at SK Bukit Lanjan.

He is glad that murals take his art out of galleries. More importantly, however, he hopes that they will inspire indigenous children to be proud of their identity.

“I want students to be proud of who they are and I want to make them want to go to school. So many are ashamed because they are always ridiculed for being ‘Orang Asli’.

“I don’t want that, and that is why I always paint Orang Asli in their traditional dress in my murals to represent our culture,” Shaq said.

The secondary school dropout rate among Orang Asli was a staggering 51.06 percent last year, according to the Department of Orang Asli Development (Jakoa). Experts have pointed to bullying, discrimination and distrust of the education system due to Islamic proselytisation as being among the reasons.

His murals have helped provide representation and visibility, but Shaq said that the art is merely half the mission. He often holds motivational talks at schools where he paints.

Working on a mural at a school helps him connect with the students there, who he observes are more receptive when a familiar face calls them to stay in school.

“I am not just a foreign face who parachutes in to motivate them,” he said with a chuckle.

He is also preparing for his first solo exhibition at the Balai Seni Negara (National Art Gallery), a considerable honour for a Malaysian artist.

The opening date is scheduled for Mac 19, 2020, although this is subject to change.

In this exhibition, he plans to represent all 18 Orang Asli tribes who live in Peninsula Malaysia through his paintings and installations.

“It’s a big task and it’s never been done before. But I hope to paint everyone,” he resolved.

Wong Yan Ke - the rebel in the spotlight

The video journalist helping Orang Asli save their lands