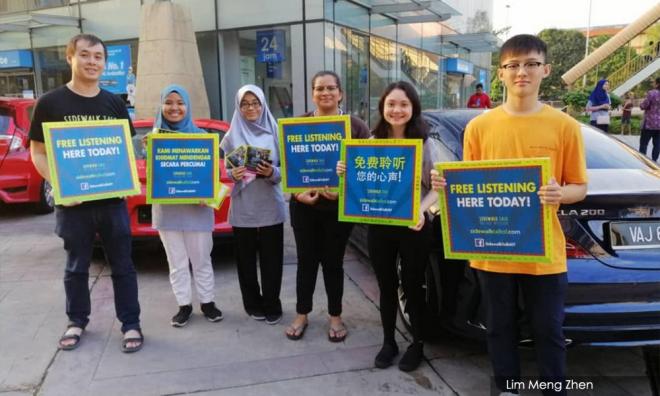 MALAYSIANSKINI | Once a month, a group of psychology students offers free listening to members of the public at the Sunway Pyramid Mall.

They number anywhere from five to 12 students and their listening sessions will not exceed more than 20 minutes.

"The problem behind mental health issues is a lack of human connection. If you listen to people having conversations at mamak stalls, they discuss problems. That is some kind of social support.

"The difference between us and them is that they hang out with people they know," said Lim, a 30-year-old lecturer who teaches psychology at Segi and Sunway universities.

Since its inception in 2017, the project has conducted 38 sessions and engaged in conversations with about 250 passers-by.

Lim (photo) said they listened to a number of elderly people who perhaps have more time on their hands, but "no one to talk to."

But the majority of participants are students who vented frustrations over numerous issues such as academics, family, friendship, and financial.

"The public perception is that a psychologist wants to know what's wrong with you. I am a social psychologist. My role is to create awareness about psychology.

"Through this project, we want to know what's right with you - and say: 'Hey, you are good with this'.

"We want to emphasise the positive parts in you. You don't have to tell us your name," he added.

The idea for the project started from a meeting in 2017 that Lim had with then Subang Jaya assemblyperson Hannah Yeoh (photo), who is now the deputy women, family and community development minister.

"She was concerned about the alarming suicide rate in Subang Jaya. On average, there was one suicide case per month in the district.

"She asked if I could do peer counselling. However, counselling would require a professional licence so I proposed the listening project."

The project gradually gained popularity on social media and started to receive invitations to engage with communities outside of Subang Jaya.

"We had also opened up tables at the night market in Tanjung Malim, Perak and in front of a mall at Bukit Bintang," said Lim.

He hastens to add that his group is all about listening, and not providing advice.

"We don't do any advice. For people who need that, we have partners like Befrienders and the Malaysian Mental Health Association. We listen to all sort of stories. Racist - sexist.

"I remember an Indian Muslim guy who came to us. He was bullied by his friends, forced to take drugs. And he said he wanted to get married but he could not find a partner. He has no one to talk to (as he felt straddled between two communities)."

Many of those who told their stories said they were really glad of the opportunity to be able to express their thoughts and emotions.

Sometimes what weighs heavily on one person's soul can be easily dismissed by another individual who lacks empathy.

"A lot of participants said this is a good thing because we ask people to open up to strangers. We also have some regulars.

"We have learnt that sometimes people want to talk to people they know, but other times they prefer anonymity.

"Many of those who prefer someone they don't know, want to avoid stigma within their community," said Lim.

Last week, the group visited PPR flats (below) in Subang.

"It's a different set of problems there. Disgruntled residents complained about clogged drains and how the local authorities were sluggish in fixing problems, rather than sharing academic or friendship issues.

"There were also people who lost their jobs after a nearby factory closed its operation," he recalled.

Lim said the project gives his students a valuable practical experience rather than relying on textbooks mostly imported from the United States.

"It empowers their learning experience," he said.

Some stories can be traumatic

As a psychologist, Lim is keenly aware that some of the stories his students hear could be traumatic. He has his methods of flushing out the "negative emotions".

"After listening, we do what we call an emphatic circle where all the listeners will gather and talk to each other again. We make sure we don't carry what we listen home. What we listen there, stays there," he said.

Lim conceded that there were times when they waited for two hours but no one came.

That didn't mean the programme has failed, he said.

"It's shallow to measure the success of the project by the number of participants. You don't close down a police station if there's no crime in the area.

"We want the community to know that if they need help, we will still be here," he said.

The dates for the next sessions are available on their website.

The video journalist helping Orang Asli save their lands

Making games Malaysians can be proud of

'This is not poverty tourism': Helping KL's homeless find their strengths