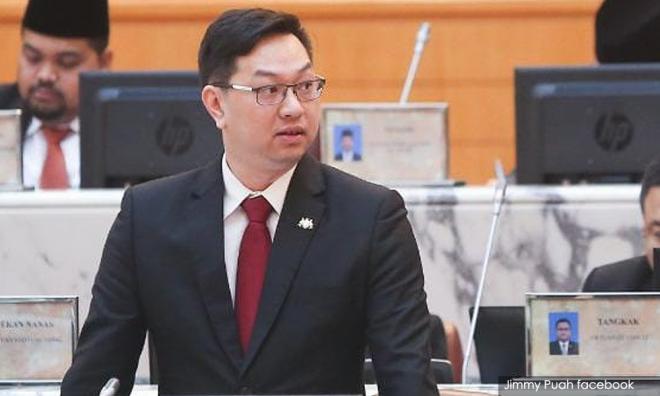 State International Trade, Investment and Utilities Committee chairman Jimmy Puah (above) said there would be a collaboration with the Department of Drainage and Irrigation (DID) and Johor Water Regulation Body (Bakaj) towards the effort.

"MSAN will have experts from the academic and corporate sectors as members to ensure sustainable water supply in future,” he said in reply to questions from Osman Sapian (Harapan-Kempas), Abdul Taib Abu Bakar (BN-Machap) and Muhammad Taqiuddin Cheman (Harapan-Pulai Sebatang) at the state assembly sitting in Iskandar Puteri today.

The three assemblypersons had asked on measures taken by the state government in ensuring sufficient water supply in Johor, including during the drought seasons.

Puah said besides efforts taken by the water supply operators, the state and federal governments had implemented a number of projects to overcome the supply shortage and to meet the high additional demand for water supply due to the increase in the state’s population and rapid development in its industrial and commercial sectors.

He said among the projects implemented were Phase 2 of Layang 2 Raw Water Transfer from Seluyut Dam to Upper Layang Dam (by the state government), channelling of raw water from the intake at Sungai Ulu Sedili Besar to Seluyut Dam (Layang 2, Phase 1) for Johor Bahru district, which is a federal government project, and building of Kahang Dam and water treatment plant for the water distribution system in Kluang.

He noted that the state government, through Ranhill SAJ, was also working at ensuring treated water reserve capacity for each district would be able to meet the Key Performance Indicators set by the National Water Service Commission (Span) by submitting the applications for facility upgrading projects or building of water treatment plants.

“Among the major ones are construction of the LRA Pagoh in Muar which is in the final stage, LRA Buloh Kasap in Segamat which is at the trial stage and expected to be fully operational by next February, LRA Layang 2 project in Johor Bahru which is to start early next year, and LRA Pemanis in Segamat, which is nearing completion,” he added.