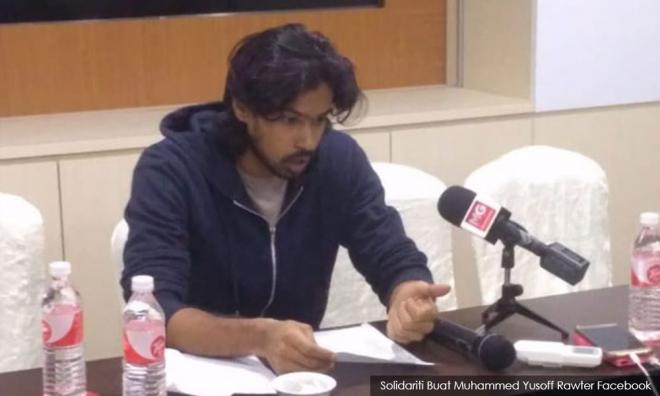 In a press statement today, Muhammed Ali Mohammed Idris disputed the version of another relative Mohideen Abdul Kadir, who claimed that Yusoff did not reveal the incident to his family.

Ali, however, said Yusoff told them about the matter “on the same day or some time that was in close proximity to the alleged incident.”

“I am terribly disappointed that Mr Mohideen chose not to communicate with us or to seek confirmation from me or my family as to what had actually transpired, prior to issuing his slanderous statement against my son.

"I hope he will think, think again, and gather the truth and facts before jumping the gun in front of the public camera," he added.

On Wednesday, Yusoff, a former staff of Anwar, held a press conference claiming that he was the victim of indecent exposure, molest and a lewd proposal. The incident purportedly took place on Oct 2, 2018, at the latter's residence in Segambut.

Yusoff had also recorded his allegations in a statutory declaration dated Nov 19 this year and the document was released just a day before the PKR annual national delegates' congress.

Anwar has denied the allegations. He has filed a police report and slapped Yussof with a legal letter.

On the same day Yusoff made his allegations, Mohideen, who is his grand-uncle, claimed that certain politicians had manipulated his nephew to tarnish Anwar's reputation.

Meanwhile, Yusoff's father, in his statement today, said Mohideen does not represent the family.

"Mr Mohideen is simply the brother of my late father, but does not in any way represent the views of our family, and neither is he speaking on behalf of our family.

"Mr Mohideen is not in any way involved in Yusoff's life and as such is completely unaware of what has happened and is going on. He is therefore in no position to have made any statements regarding my son.

"My family would like to discredit and disavow the above-referred statements made by Mr Mohideen, and we wish to state categorically that those statements and allegations by Mr Mohideen were unnecessary, and fallacious in nature," he added.

Ali said their family would refrain from making further statements or comments on the issue, and any information would only be conveyed by the family through appropriate channels or to the court of law.