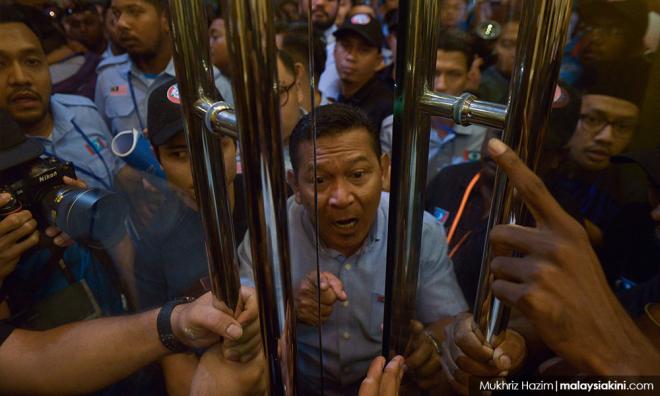 Scuffles and arrests at PKR Youth meet, and 9 news from yesterday

1. The PKR Youth congress kicked off with several rounds of scuffles that led to two being arrested and another two injured. Party president Anwar Ibrahim wants the rabble-rousers sacked.

2. Over at the PKR Women’s wing congress, the wing’s chief spoke of rapprochement between the party’s rival camps and said Pakatan Harapan’s defeat at the Tanjung Piai by-election is a reminder to fight for the people instead of amongst themselves.

3. Attorney-General Tommy Thomas blamed ‘disobedient’ officers for filing an appeal to challenge PKR vice-president Rafizi Ramli’s acquittal for allegedly breaching banking secrecy. He said he would rescind the appeal and punish the officers.

4. Umno president Ahmad Zahid Hamidi called for “political equilibrium” where Umno would protect the interests of all races, but Malays remain the main pillar.

6. Federal Territories Minister Khalid Abdul Samad polled ahead of his rivals at the Amanah party election, garnering 786 votes from 822 delegates.

7. A scrap metal dealer detained over alleged links to the Liberation Tigers of Tamil Eelam (LTTE) told the Kuala Lumpur Sessions Court that police threaten to give him a black eye just like after Anwar was beaten in detention in 1999.

8. A viral video of pupils singing the national anthem in Mandarin turned out to be a class lesson and not part of an official function, says the Education Ministry.

9. A suspect who allegedly desecrated St Anne’s Church in Bukit Mertajam on Wednesday has been arrested in a psychiatric ward. His wife said he was mentally ill and urgently needed treatment.

10. Four new Dewan Rakyat special select committees have been established to scrutinise matters pertaining to elections, human rights and constitutional affairs, international relations and trade, and science, innovation and environment. One of them is headed by an opposition MP.