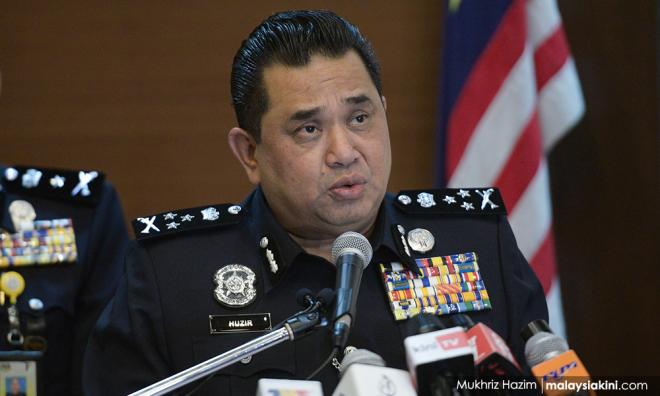 Two witnesses had their statements recorded today on pupils of a Chinese primary school in Seremban singing the national anthem Negaraku in Mandarin in September.

Bukit Aman CID director, Huzir Mohamed (photo, above) said the two were an assistant director from the Negeri Sembilan Education Department and the school's headmaster.

"The recording of statements from the other witnesses would be done based on the appointments that had been arranged,” he said in a statement this morning.

On Dec 6, the Education Ministry said in a statement that the ministry would not compromise with anyone who breached regulations involving the Federal Constitution, whether directly or otherwise.

The video recording lasting one minute and 23 seconds, showing the pupils singing the Negaraku in Mandarin, was allegedly recorded on Sept 26, 2018, at SRJK (C) Ma Hwa in Seremban.

In a related incident, Huzir said police have also begun investigations on another school in Gurun, Kedah, where the national anthem was sung in Arabic.

“The recording of statements of witnesses had been carried out yesterday involving the headmaster of Sekolah Kebangsaan Batu Empat, Gurun, the Kuala Muda district education officer as well as the suspect who recorded and uploaded the video in Facebook.

"So far, the police have received eight reports concerning the same issue and both cases are being investigated under Section 8(3) of the National Anthem Act 1968 and Section 233 of the Communications and Multimedia Act 1998,” he said.

On Dec 7, a recording of the Negaraku, lasting up to one minute and 28 seconds, was sung by a group of youths in a class. They are believed to be from a religious school and a primary school.

He also said police have completed investigations into the incident where a distorted Jalur Gemilang with a five-pointed star was electronically displayed at the opening ceremony of a basketball tournament in Kuala Lumpur last month.

"We have taken statements from five people, including the complainant, organiser, association executive secretary, company director and the IT vendor.

"We have also seized equipment used in connection with the case," Huzir said adding police had received 31 reports on the incident. - Bernama