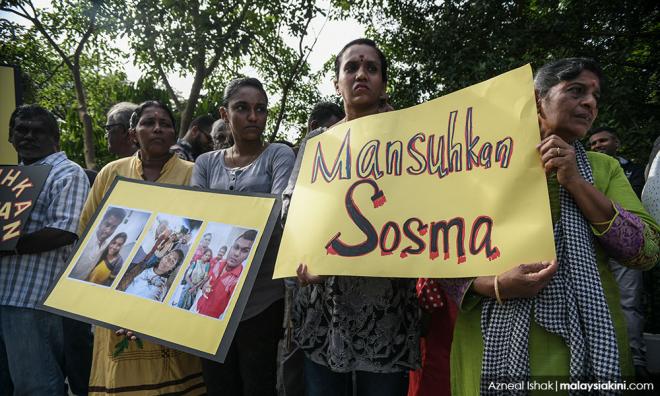 ADUN SPEAKS | I commend the Attorney-General Tommy Thomas for standing up to not approve additional charges on those detained for LTTE links, and in not appealing on the Rafizi Ramli matter and most importantly, the decision of the High Court judge Mohd Nazlan Mohd Ghazali in allowing for the appeal of Gadek assemblyperson G Saminathan, who is one of the suspect in the LTTE arrests.

The landmark decision by the High Court judge that the power to grant or not to grant an appeal cannot be snatched from the judiciary by the executive provides fresh hopes for those detained under the Security Offences (Social Measures) Act of 2012 or Sosma.

If the executive is allowed to exercise its jurisdiction on the matter of the appeal, it would make a mockery of the systems of checks and balances enshrined in the constitution.

It was certainly a bold decision by Mohd Nazlan in giving credence to the fact that judges in the country are not mere pushovers but are expected to perform the role of the guardians of the constitution.

The supreme role of the courts is to ensure the constitution is respected and protected.

Any legislation that contravenes the system of checks and balances is considered ultra vires of the Constitution.

Sosma might have replaced the Internal Security Act but it is still a draconian legislation that provides a long period of remand until such time the cases are finally disposed of.

This might take months or even years. Whether those charged are guilty or not are kept in remand for a long period. It is a stain on the justice system to keep those arrested who might be innocent incarcerated under the guise of remand.

I am not sure how Sosma is any different from the Internal Security Act legislation it replaced.

It is not up to the executive branch to decide whether those detained have the right to appeal or not.

This is the jurisdiction of courts in the country, something that cannot be snatched on the basis of legislation or the threat to national security.

Judges have been silent for too long resulting in serious human rights abuses such long periods of remand, convictions based on insufficient evidence and long periods of incarceration.

Some might even say that courts might have abdicated their constitutional role if they had sidestepped the matter of executive usurpation on issues of judicial prerogative.

The executive branch has taken the country on a long ride with the existence of undemocratic legislation that is against human rights.

The sooner the judges have the courage to strike down unfair legislations and practices, the better it is for the society.

While Thomas’ role in consenting to the charges against the 12 detainees remains shrouded in mystery, perhaps the time has arrived for him to show how he could set them on the path of freedom.

The court judgement allowing them to appeal against their detention and the noble intention of Thomas not to appeal this matter will go a long way in ensuring justice for those detained under the Sosma.

The ultimate abrogation of Sosma or the obnoxious parts of it will have to wait for the next session of the parliament.

If no progress is made in either abrogating the entire Sosma legislation or its cruellest parts, the Pakatan Harapan government could pay the ultimate political cost.