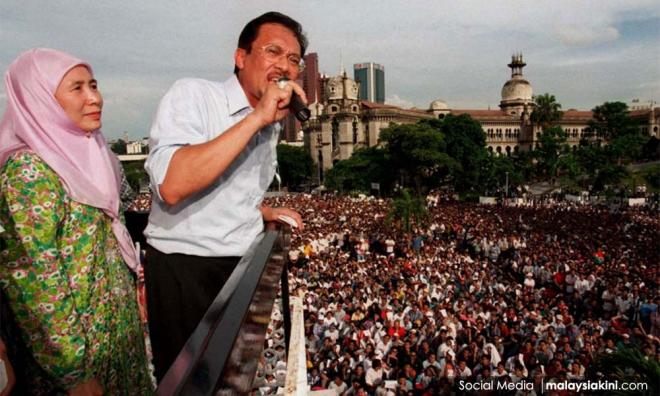 COMMENT | Attending PKR's 2019 National Congress - twenty years after the party was founded - brought back a gamut of emotions and memories for me.

I remember the debates when the reformasi movement took place. I attended "Nadwah Kepimpinan Islam", an event run by the National Muslim Students Association (PKPIM) for Islamic student leaders from fully residential schools just after Anwar Ibrahim was sacked.

PKPIM has strong ties with Anwar and the university students explained to us what was happening. The president was Amidi Manan, who was arrested under ISA after the event. Amidi is now a Central Leadership Council member of PKR.

At the end of the event, a teacher of mine – probably after brainwashing at some government event – claimed that he saw all evidence that Anwar was guilty.

Back home, I was surprised that my pro-PAS father fervently believed that Anwar was innocent. We debated over the need to stand up for principles, on whether it was worthwhile to embrace a man who almost reached the top of the rotten system he was now fighting against.

My family were opposition supporters but were, of course, concerned about my safety. Eventually, as a 16-year-old Malay College Kuala Kangsar (MCKK) man in a hurry, I felt that this was my fight.

Then the 1999 general election came along.

Despite its multiracial aspirations and urban base, PKR ended up with a meagre five seats, all Malay and mostly rural, including Anwar Ibrahim’s Permatang Pauh stronghold, contested by Dr Wan Azizah Wan Ismail.

Our big guns had mostly been defeated and in urban, multiracial constituencies at that. We hadn’t quite worked out the magic formula that propelled us to victory in later years. The opposition obtained a majority of the Malay voters but Dr Mahathir Mohamad and BN were saved by the non-Malay voters.

In 2001, I was 19 and my MCKK seniors, Rafizi Ramli and Allahyarham Adlan Benan Omar roped me to assist the party – organising events, writing articles and speeches as well doing research for the leaders. It sure beat reading boring law textbooks.

The 2004 general election was worse than our maiden elections five years back. Abdullah Ahmad Badawi delivered the biggest victory for BN sweeping 90 percent of the seats in Parliament.

I was running PKR's party’s website and was waiting to update it from London when we found out that only Dr Wan Azizah Wan Ismail had survived the rout - and even then by a mere 500 plus vote majority after several recounts.

Still, when Anwar first sodomy verdict was overturned that year, there was excitement and trepidation. I was there in person to greet him, having previously corresponded with him when he was in prison.

But there were whispers that he would eventually shut down PKR and rejoin Umno like so many previous ex-leaders did. The party had just merged with the five-decade-old Parti Rakyat Malaysia (PRM).

I was hoping - and sure - that it would not happen. Perhaps it was due to my Kelantan roots and rebellious nature. But more importantly, because I knew that the only way forward for Malaysia was via a multiracial party with a viable Malay base.

I soon graduated and was serving out my scholarship bond with PNB. I decided to formally join the party, via its Kelana Jaya division. I knew that all politics was local and that working at the grassroots level was the best way to get the pulse of the rakyat.

The party, back then, was small and poor, driven by idealism. Only a small core was left after the disappointments of 1999 and 2004. PKR’s Kelana Jaya division had a significant PRM base: its chief was the latter’s former Youth leader and MTUC president Syed Shahir Syed Mohamud, as well as the son of one of its MPs Karam Singh and the children of Hamid Tuah who fought for the Malay poor.

The rest were ex-Umno members and formerly apolitical Malaysians who were galvanised by reformasi in 1999. For instance, Yee Siew Meng, (a fellow product of La Salle PJ) joined after listening to Mohd Ezam Nor’s ceramah. He would later become a Presbyterian pastor.

Less than a year later, Anwar invited me to set up his personal office as his private secretary. I took the plunge by securing a mortgage on a family property to pay my sponsors, PNB, back for breaking my eight-year bond. Some people thought I was crazy, but I felt it was too good of an opportunity to miss.

What heightened the attraction for me was Anwar’s 2006 declaration that PKR would seek to replace the NEP with a "Malaysian Economic Agenda" that would be centred on needs-based, colour-blind affirmative action.

Many of Anwar’s friends – including the non-Malays – called the move political suicide.

But that year, in a moment now forgotten by many, PKR won its first state seat in Sarawak. The candidate was Dominique Ng, giving the party its first non-Malay legislator. It was a breakthrough for a party often seen in Sabah and Sarawak as a carpet-bagging “Parti Malaya”.

NIK NAZMI NIK AHMAD is the member of Parliament for Setiawangsa and PKR organising secretary. He is chairperson of the Defence and Home Affairs Select Committee in Parliament. A more detailed elaboration of the events leading to the Pakatan Harapan victory was recorded in his book 9 May 2018: Notes from the Frontline.

Zuraida agrees with Anwar on internal channels to voice opinions.
13 Dec 2019
Yoursay: All contributed to reformasi, Anwar more than everyone
13 Dec 2019
PKR disciplinary board vows stern action after congress fracas
10 Dec 2019
Azmin assures that he will not leave PKR
8 Dec 2019