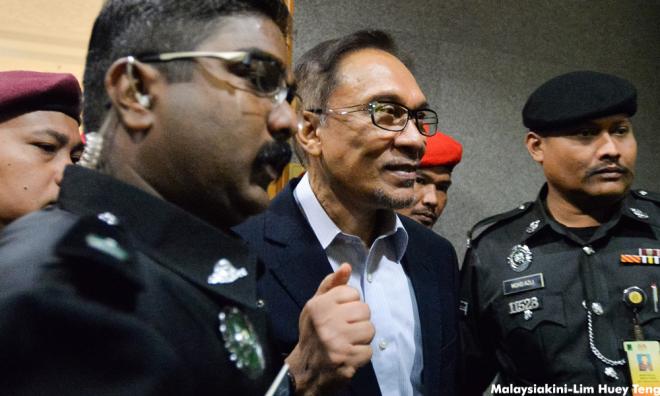 COMMENT | But this was nothing compared to the roller-coaster of 2014. This was, of course, the year of the “Kajang Move”. That was also the year of the 2014 party elections.

I was elected as the party's Youth leader. But while I was giving my inaugural speech to the Youth congress, more than two-thirds of the elected committee members walked out behind me. They were protesting the fact that I had narrowly defeated my opponent, who was from their faction.

Under the Azmin Ali administration in Selangor, I was promoted from being deputy speaker of the state assembly to a state exco position. Some calm finally emerged.

But then the same pattern repeated itself. The factional hostility took its toll. Certain leaders allegedly told Anwar Ibrahim all sorts of things to undermine me. Of course, I had my faults and weaknesses. But they exaggerated it to the next level. It was tiring and distracting, to say the least.

The party suffered immensely when Anwar was imprisoned again in 2015. Coupled with the vacuum left by the passing of Nik Aziz Nik Mat from PAS and Karpal Singh from DAP, the Pakatan Rakyat coalition finally broke down.

I gathered young leaders, not just in PKR but DAP, PAS and civil society as well to launch the "Kita Lawan" campaign to protest the imprisonment of Anwar. I was arrested twice – once remanded for three days – for organising the demonstrations, although I was not charged in court.

Despite it all, Dr Wan Azizah Wan Ismail kept the party together in the face of constant backroom manoeuvrings. She is an "iron lady" who wears satin gloves. Underestimate her at your own peril.

She pushed for the formation of Pakatan Harapan with the newly-established Amanah as well as DAP in spite of the opposition of a few members of PKR’s Central Leadership Council. This led to the fiction that Pakatan Rakyat was somehow still alive in Selangor when it was basically a mixed government involving Pakatan Harapan and PAS.

As the next election loomed, I felt the time had come for me to move to a federal constituency. After discussions with Rafizi, we settled on Setiawangsa – a seat BN had never lost.

Setiawangsa was also daunting because it hosts the Ministry of Defence headquarters and the Police Training Centre giving it about 17,000 early voters whose votes usually went against the opposition. But I was unperturbed, I felt that if we were serious about winning national power, Harapan must-win seats like Setiawangsa.

Despite his frustrations with the party bureaucracy, Rafizi Ramli created "Invoke" using a large portion of his meagre savings. Malaysians from all walks of life were recruited and sent to marginal seats across the country. A lot of the initiatives that he pioneered, which many ridiculed him for - like public asset declarations - are now in the political mainstream.

The next breakthrough was the rapprochement between Dr Mahathir Mohamad and Anwar. Mahathir was very strategic; when some leaders from PKR who had courted him continued to flirt with PAS, he maintained his focus on the wider party.

I still remember when Mahathir made a surprise appearance at a Bersih rally when Rafizi was speaking. Certain members - including Zuraida Kamarudin - were shouting insults against him.

Their anger against Mahathir was understandable. But it was uncouth of them to shout things like "Mahazalim" and "Mahafiraun" at him.

The early-2018 Pakatan Harapan convention eventually came to a consensus - if the alliance won, Mahathir (who had formed Bersatu after, again, leaving Umno) would be prime minister and Wan Azizah his deputy.

Anwar would be released and pardoned. He would play a role in government before being appointed as the country’s eighth prime minister. This was the coalition’s solemn promise to the people.

But some leaders walked out from the announcement. It was the same modus operandi all over again.

Ironically, when we all gathered at the Sheraton in Petaling Jaya on the evening of May 9, 2018, these same leaders were now trying to circle the PM-designate in hopes of securing their positions.

PKR emerged with 50 seats, everywhere from Perlis to Sabah. We failed to win seats in Kelantan and Terengganu but in the other states, we had legislators of all stripes, Malays, Chinese, Indians, Dayaks and Kadazandusuns.

The politicians who were against the consensus obtained the loftiest positions, in spite of never believing in the Harapan project in the first place.

That I can accept. Yet, if they are still obsessed in political skullduggery instead of delivering on their portfolios, can they blame the rakyat for being cynical?

When Zuraida, who likes to put on a cloak of religiosity and feminism, rains insults on the young, it shows that they have lost the plot. What message does it send to young Malaysians, especially the 18-year olds who will be able to vote for the first time?

Yes, politics is about winning power. But this must be for the upliftment of the people. If there are party leaders who have lost sight of this - no matter how senior they may be - it would probably be better for them to leave.

But it’s not too late for them to come to their senses, to realise that PKR is a party of, for and by the people.

It is, must and will always be a party for reform.

NIK NAZMI NIK AHMAD is the member of Parliament for Setiawangsa and PKR organising secretary. He is the chairperson of the Defence and Home Affairs Select Committee in Parliament. A more detailed elaboration of the events leading to the Pakatan Harapan victory was recorded in his book 9 May 2018: Notes from the Frontline.