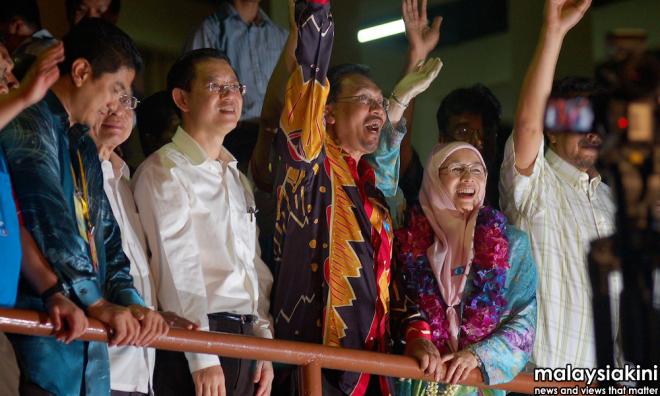 COMMENT | We spent the next couple of years working hard but 2008 was still a surprise.

I was called to stand in Seri Setia (within Kelana Jaya) while other young comrades in the party– Nurul Izzah Anwar, Sim Tze Tzin, Chang Lih Kang and Amirudin Shari ran in parliamentary and state seats across the country.

PKR could run young faces because it was short of heavyweights and warlords.

A friend, upon learning that I was running, promised to help me find a job afterwards, feeling quite certain I was going to lose.

All of the abovementioned young candidates won. PKR emerged with 31 multiracial MPs and our Pakatan Rakyat coalition won control of several states.

In some ways, our trajectories have continued upwards since then. Today, Amirudin is the menteri besar of Selangor. Sim is the deputy agricultural minister. Izzah is a three-term MP.

In 2008, I ended up with not one but two jobs: as a state assemblyperson (the youngest candidate to win in the 2008 election) and political secretary to Abdul Khalid Ibrahim, the new PKR Selangor menteri besar.

But not all of the “accidental” legislators did well, particularly those from PKR. A few defected. Anwar was hit with new allegations, barely two months after the victory.

Two years after 2008, I left my post as political secretary amicably. But privately, I felt frustrated at the tensions between Khalid and the party.

But I focused on my new role as PKR’s communications director, working on the "Demi Rakyat" campaign along with my mentor, Rafizi, who became politically active again and was the party's strategic director.

Unlike 2008, we approached 2013 with optimism as Anwar campaigned for the party across the country.

God had other plans. Our target was 50 seats, but we ended up with 30. There were claims of electoral impropriety.

PKR and Pakatan Rakyat wanted to send a strong signal to protest the results by launching the "Black505" campaign, in the MBPJ's Kelana Jaya Stadium in my constituency, three days after election day.

As it was in Seri Setia and understanding that the authorities would be paying extra attention to it, I took the responsibility of sending the notification informing the police of the event under my name. It was the right thing to do.

The gathering was massive, turning not just the stadium seats but the field and even surrounding roads black. Black T-shirts ran out at the Paradigm Mall nearby. More than an estimated 100,000 attended.

As expected, I was charged with the offence of not providing the required 10-day notice under the Peaceful Assembly Act. After many years and court dates, I believe the law has vindicated my actions.

More seriously, cracks also reappeared in Pakatan Rakyat as well as within PKR. Azmin Ali spoke out against the Black505.

My participation in the massive protests allegedly cost me a chance to become a potential Selangor state executive councillor - although, quite frankly, this did not disturb me in the face of the alleged massive improprieties.

NIK NAZMI NIK AHMAD is the Member of Parliament for Setiawangsa and PKR organising secretary. He is chairperson of the Defence and Home Affairs Select Committee in Parliament. A more detailed elaboration of the events leading to the Pakatan Harapan victory is recorded in his book 9 May 2018: Notes from the Frontline.