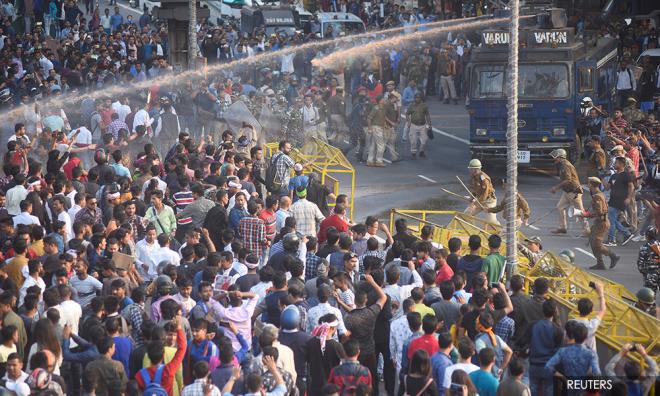 Three die in protests against new citizenship law in India

Three people died of injuries sustained in intensifying protests against a new citizenship law in India yesterday with thousands taking to the streets nationwide in defiance of temporary bans on public gatherings.

Some protesters clashed with police over the law, passed by Prime Minister Narendra Modi’s Hindu nationalist government, that critics say is discriminatory against Muslims and undermines India’s secular constitution.

Police detained hundreds of people in the capital New Delhi and the southern city of Bengaluru and shut down the internet in some districts to help pre-empt large planned protests.

College students, academics, minority Muslim groups and opposition parties have been prominent in an escalating series of street protests now in their second week.

The government says the Citizenship Amendment Act is required to help non-Muslim minorities from Afghanistan, Bangladesh and Pakistan who came to India before 2015 by granting them Indian nationality.

A curfew was imposed later in parts of Mangaluru.

Internet and text messaging services were suspended by government order for four hours in parts of New Delhi, mobile carriers said, widening a communications clampdown in restive areas stretching from disputed Kashmir to the northeast.

Haroon Patel, an Indian citizen who lives in London, joined the Mumbai rally and called the new law the first step toward dictatorship, adding: “We have to save the country.”

Supporters of the bill held a counter-demonstration in Gujarat, Modi’s home state in western India.

“The fault lines are defined - either one supports the law or stands against (it)...Indians have to decide and protest,” said Rupak Doshi, who organised a large rally in support of the law in Gujarat’s main city Ahmedabad.

Most protests across the country came off peacefully, but some turned violent, including in Mangaluru where stone-pelting mobs ignoring a temporary ban on public gatherings were repelled by police, a government official said.

A Reuters witness said police fired shots in the air in at least three areas and unleashed tear gas to scatter protesters.

In Lucknow, three protesters were hospitalised with gunshot wounds and one later died, an official at King George Medical University said.

“People are allowed to protest, but no one is allowed to break the law,” said Yogi Adityanath, a senior leader of Modi’s party and Uttar Pradesh state chief minister.

In the eastern state of Bihar, a senior police official said more than 200 protesters detained in a police campus in Patna were chanting slogans against the law, but they would not be silenced by force.

Dozens of airline flights out of New Delhi were cancelled due to a lack of staff who were held up by traffic disruptions caused by protesters, and a number of Delhi metro stations closed.

A senior home ministry official said maintaining law and order was a state responsibility but reserve forces were ready to provide immediate assistance.

Rights group Amnesty International has asked federal and state governments to stop the crackdown on peaceful protests against what it called a “discriminatory” citizenship law.

Defying the bans, protesters held rallies at New Delhi’s historic Red Fort and a town hall in Bengaluru, but police rounded up people in the vanguard of those demonstrations as they tried to get underway.

In Bengaluru, Ramchandra Guha, a respected historian and intellectual, was taken away by police along with several other professors, according to an aide. “I am protesting non-violently, but look, they are stopping us,” he said.

Police said they had detained around 200 people in the city, where protest organisers said thousands attended four demonstrations yesterday.

Opponents of the law say the exclusion of Muslims betrays a deep-seated bias against the community, which makes up 14 percent of India’s population, and that the law is the latest move by the ruling Bharatiya Janata Party to marginalise them.

Discontent with Modi’s government has burst into the open after a series of moves seen as advancing a Hindu-first agenda in a country that has long celebrated its diversity and secular constitution.