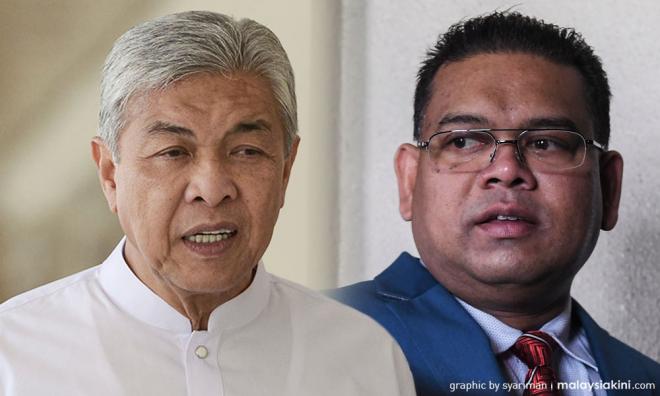 Umno supreme council member Lokman Noor Adam (above, right) today alleged that it was Umno president Ahmad Zahid Hamidi (above, left) who scuttled the disciplinary hearing against the party's Sembrong MP Hishammuddin Hussein, which was supposed to have taken place today.

Responding to Mohamed Apandi Ali's decision to resign as the Umno disciplinary board chairperson following the postponement, he said there was "something wrong".

He praised Apandi as a principled person.

"The Umno disciplinary board is supposed to be independent and its investigation cannot be blocked, even by the party president.

"The party president's action contravenes the party's constitution and insults the position of the disciplinary board and its chair," he said in a statement today.

Lokman claimed this was the third time disciplinary proceedings against Hishammuddin (below, centre) had been scuttled, despite what he claimed was Hishammuddin's role in facilitating defections from Umno to Bersatu.

"If Umno hopes to replace the Harapan government, we do not need more such leaders. We do not need leaders to cover up their cases and breach party discipline," he said.

He added that the justification not to proceed with disciplinary action against Hishammuddin was unacceptable.

"This is the best time to act against those who want to betray our sacred struggle and the people's hope.

"Any move to sweep Hishammuddin's case under the carpet, or to give excuses that it is necessary to keep Umno MPs together so that they can act en bloc, is evidence that there are negotiations going on with the government and Bersatu.

"What has happened to the promise that we do not want to form a backdoor government?" he said.

Hishammuddin was served a show-cause letter on Dec 13, and was required to appear before the disciplinary board today. However the hearing did not materialise.

Immediately after the gathering, Lokman had accused Hishammuddin of rallying Umno MPs for Azmin.

Lokman also revealed that he had lodged a complaint against Hishammuddin on Oct 30 and urged the party to take action. Lokman had claimed Hishammuddin was responsible for orchestrating the defection of Umno MPs to Bersatu.

This was amid speculation that Hishammuddin and Azmin were working together to gather enough MPs to ensure Dr Mahathir Mohamad can stay on as prime minister, and to thwart PKR president Anwar Ibrahim's rise.

Hishammuddin has denied the allegations against him.