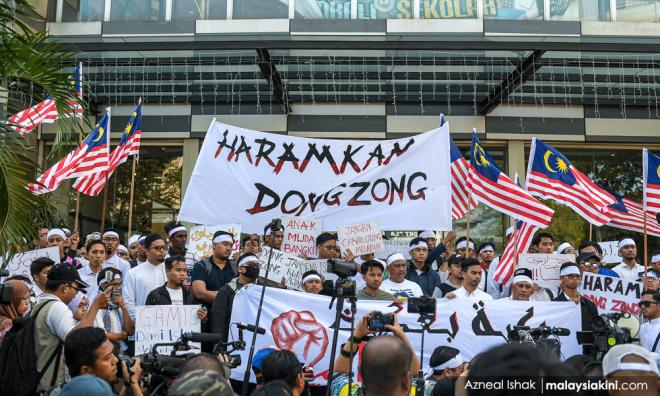 Yoursay: Dong Zong is made to look like a scapegoat

YOURSAY | 'They don't oppose the Jawi script but want consultation on the implementation.'

Honma: No one is stopping those Malays who want to revive the Jawi script, and the Chinese community is not stopping anyone from learning it. They are only requesting that it should not be imposed on vernacular schools.

PAS has twisted what Dong Zong said to make the Chinese education group look bad in the eyes of the Malays.

Harping on the Malay sentiment can endanger the peace and harmony of the country.

Anonymous_b3cdcd05: Dong Zong has made it very clear that it does not oppose the Jawi script but there needs to be further consultation as the school board is the rightful authority to decide.

The control of Chinese education and Chinese vernacular schools falls under the purview of Dong Zong and it is the legitimate arbitrator to deal with this controversy.

Dong Zong cannot be faulted for doing what it is expected to do.

GalaxyM: These protesters are ignoring the plea of the minority community regarding the introduction of Jawi script in vernacular schools. They blindly blame DAP for instigating Dong Zong in opposing the Jawi issue.

Prime Minister Dr Mahathir Mohamad and other Malay leaders should openly condemn the action of this shameless and irresponsible racist group.

Nowhere, even in the heydays of Daesh caliphate in the Middle East, were they able to implement religious and cultural hegemonies on the minorities.

So, by the same token, there is nothing wrong with the communist-led government of China imposing their beliefs on Muslims in their country, especially the Uyghur community.

And going by the same “we are the majority” logic, there is also nothing wrong with the Myanmar government threatening violence on the minority race.

Mazilamani: Not all Malaysians offer blind loyalty to race-based parties or NGOs. Many people assess a candidate based on qualification, experience in social services and his or her relationship with other races.

These small-minded supporters have no right to be associated with politics or political parties if they cannot accept the multi-racial makeup of Malaysia.

Clever Voter: PAS Youth is demonstrating against Dong Zong for opposing the use of Jawi. But lies are used to mislead people and serve the interest of their warlords.

The 300 people who attended the “march” probably have no idea why they were there and what they were actually protesting against.

Newday: This cannot even call it a march really, more of a walk. During their gathering, this group still managed to upset the hardworking and talented street buskers with their rowdiness.

Meanwhile, Dong Zong arranges a meet in a private space and doesn’t bother anyone - the buskers, audience or permit authorities.

Falcon: This is a provocation on a planned and initiated basis.

It is now pertinent for the police to ascertain who is financing, funding these series of hate crimes, defamation and religious and race-baiting on a regular basis.

Muafakat Nasional may be less suitable in Sabah, says Zahid

Chriskwan-Sabah: Umno president Zahid Hamidi, take your Muafakat Nasional back to the peninsula, it is not suitable for us in Sabah. To us Sabahans, Muafakat Nasional only divides people - racially and religiously.

Sabahans are united as Malaysians. Period.

Now that Umno and PAS have become a coalition, Sabahans have to beware that PAS will interfere in the policies of the nation.

The Wakandan: Let’s enjoy the show then. Let’s see this unlikely marriage of convenient can put up a convincing act to convince the folks in Sabah.

The last time we saw, PAS was completely rejected, unceremoniously shown the door there and in Sarawak too. Nobody wants your religious bigotry toxin, keep it to yourself.

FairMalaysian: If they are allowed to continue with their brand of politics, it will destroy the amity among the races/religions in Sabah and Sarawak.

I hope the people of these two states would be on guard and not allow these people to roam the states.

They are already sowing seeds of discord in the peninsula.

Léon Moch: Then the Umno-PAS pact shouldn't be called Muafakat Nasional. When you say “Nasional”, it should include all parts of Malaysia.

How typical for them to do something that is “Malay-wide” and still call it national.

One: Their ability to think at the national level is not there. So they will try to divide and conquer but these are not leaders. Leaders unite.

Those who divide and conquer are plunderers. We don’t want Muafakat Nasional in Sabah.