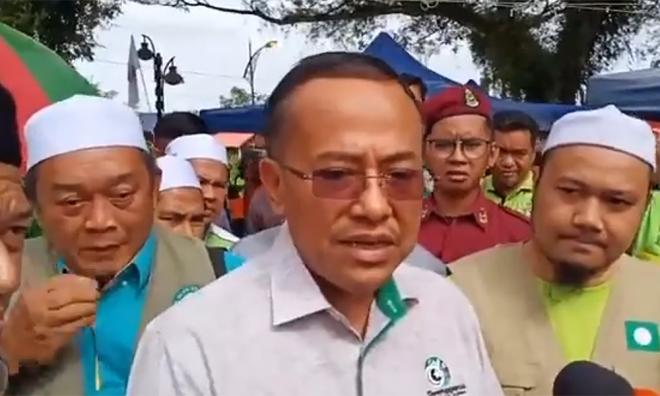 T'ganu MB: Hadi and I met PM for 'good of nation'

Terengganu Menteri Besar Ahmad Samsuri Mokhtar has dismissed suggestions that there was anything untoward about a meeting between PAS president Abdul Hadi Awang and Prime Minister Dr Mahathir Mohamad, at which he was also present.

Ahmad Samsuri (above) told a press conference in Besut, Terengganu, that it was important to strengthen the ties between the state and the federal governments, according to a report in Free Malaysia Today.

“I don’t think anyone would disagree with anything that’s good.

“If it’s anything positive that will benefit the state, the people and the country as a whole and even fellow Muslims, then we must look for the best way. This will benefit everyone,” he said.

Ahmad Samsuri added that differences in opinion should not prevent him from meeting government leaders.

This comes after the meeting prompted speculation that Mahathir's supporters are attempting to co-opt PAS into the federal government in order to circumvent the possibility of PKR president Anwar Ibrahim becoming the next prime minister, as was promised by Pakatan Harapan leaders.

Mahathir laughed off such talk, saying he could work with anyone in politics, except for former prime minister Najib Abdul Razak.

“Yes, there is a picture of me greeting Hadi.

“I greet everybody, including unkind reporters... not only the nice reporters. That is my job. I meet everybody even though these people were, well, my enemies and all that,” Mahathir said in response.