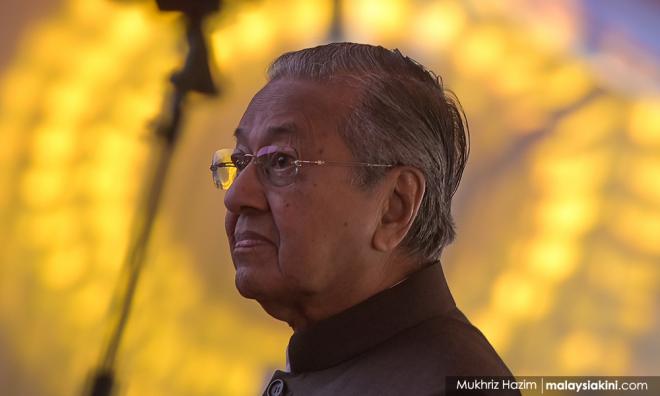 Yoursay: 'Vote of confidence' for PM a waste of time

YOURSAY | ‘It is absurd for opposition parties to move a vote of confidence for a PM with existing majority support.’

Apa Harapan: The fact that Dr Mahathir Mohamad is prime minister means he already garners confidence of more than half of Parliament’s representatives.

As the opposition parties, PAS and Umno have every right to move a motion of no confidence against the prime minister.

However, it is absurd and childish politicking for opposition parties to move a vote of confidence for a prime minister who already has the existing support of his own party and coalition that make up the majority of the House.

The Parliament is the supreme body for debate and passing laws. Instead, it is being turned into a circus by PAS with the support of Umno.

As a sensible opposition, PAS and Umno should be debating about the economy, education, health, welfare and other matters of importance for the nation.

They should focus on what they have been elected to do. Instead, they are wasting time talking about a motion of confidence. The motion should be shot down by the House speaker for what it is - a childish prank.

Gerard Lourdesamy: It is contrary to parliamentary practice and convention for the opposition to move a motion of confidence in the sitting prime minister.

If the motion is allowed to be tabled and it is carried, it effectively means the end of the opposition.

In practical terms, the opposition will be regarded as pro-Harapan while remaining out of the government. Is this what Umno and PAS want?

How can both parties then convince their respective Malay voter bases that they are anti-Harapan because the latter is allegedly dominated by non-Malays/Muslims and is anti-Malay and anti-Islam, while at the same time being supportive of Harapan’s prime minister in the Parliament?

Based on convention and well-established parliamentary practice, the Dewan Rakyat speaker should reject the proposed motion on the grounds that it is not specific, not urgent and not in the public interest because the Harapan coalition has a clear majority of seats in the Dewan Rakyat.

At present, there is no credible evidence that the current prime minister and the Harapan government have lost the confidence of the majority in the House.

In addition, unlike in the UK House of Commons’ Standing Orders, there are no specific provisions in our Dewan Rakyat Standing Orders to give priority to such a motion over government business in the Parliament.

If Mahathir already commands the confidence of the majority of the House based on the 139 members of parliament who are part of the ruling coalition and its allies, such a motion of confidence is not only superfluous but also suggests improper motives on the part of the opposition.

Anonymous Bdd98e3f: The people in the states which PAS rules are generally poor. PAS should focus on developing the two states under its care and help improve the lives of the people there.

Instead, it is placing more importance on politicking and coming up with hare-brained schemes like a vote of confidence for the sitting prime minister, who is from their opponents’ coalition and already enjoys majority support from the members of parliament.

PAS should instead be asking the rakyat whether they have confidence in the Islamic-based party. Please stop the "wayang kulit".

Milshah: Mahathir has plenty of Malay supporters, and it was these groups of voters that played a pivotal role in tipping the balance in favour of the Harapan coalition during the last general election.

PAS’ decision to hold a confidence vote is nothing more than to send a message to these Malay voters that they are fully backing Mahathir despite being on the opposite side.

Regardless of the House speaker’s decision to allow or disallow the motion, PAS’ main goal is to be seen to be supporting the prime minister.

Currently, Mahathir’s Bersatu is seen as a huge disappointment by the non-Malays because of its recent moves and decisions which are seen to be Malay-centric.

However, if Mahathir and Bersatu are to lose the support of their fellow Harapan coalition members for whatever reasons, they have the option of forming Pakatan Nasional with Malay-based opposition parties PAS and Umno.

The members of Pakatan Nasional can be expected to get on well with one another as the Malay-based parties basically share the same view and struggle anyway.

Justice: Yes, PAS’ intention to table the confidence vote purportedly to support Mahathir to serve a full term is clearly a political strategy and a psychological war to weaken the Harapan government.

By having the prime minister serve a full term, it will betray Harapan’s pre-election promise of Mahathir handing over the position to PKR leader Anwar Ibrahim. This will portray Harapan as a coalition of parties which is untrustworthy and not united.

Mahathir leaving at the end of a full-term will also be beneficial to the opposition parties and this will leave his successor with very little time to unite the different parties in the ruling coalition and prepare Harapan for the next general election.

That, as mentioned before, is a complete reversal of a promise made by Harapan in GE14 – that Mahathir is to serve as an interim PM and Anwar to take over within a couple of years.

Guglu: Indeed, PAS is simply being mischievous. It wants to rattle Harapan and make Anwar nervous regarding the transition of power. And Mahathir is joining the game by making vague statements which creates anxiety in Anwar’s camp.

Umno should remain aloof and respectable by not joining this game. The party should be serious in serving the rakyat and focus on preparations to return to power in the next general election.

Thick Skin: When we are threatened by racial and religious disunity, perceived threats from terrorists groups that have long been vanquished, diseases that are affecting our way of life, poor future for our students stuck with an archaic education system, our constant uncalled for criticism of powerful nations, we have this Islamic party who - being totally clueless of nation-building - wants to pass a vote of confidence in the prime minister who already enjoys the confidence of the majority.