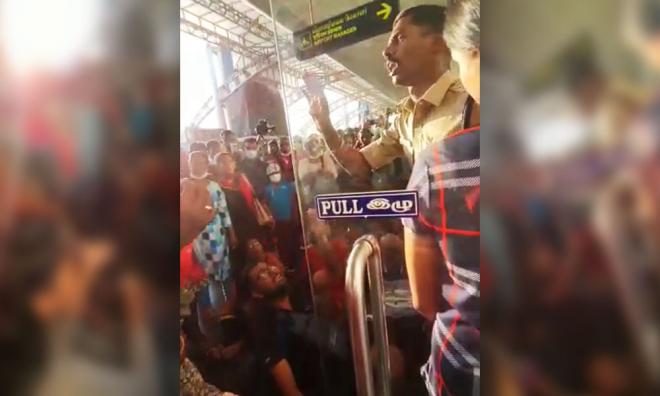 Yoursay: Putrajaya, not MIC, should bring back stranded M'sians

YOURSAY | 'Why are Malaysians in India not being taken care of by Wisma Putra?'

Thousands of M'sians still stranded in India - what is our gov't doing?

'We have no say' - MIC dismisses Satees' 'selective repatriation' claim

Anonymous_153309: What I don't understand is why MIC should involve itself in the repatriation of Malaysians stranded in India and pay RM1 million, as it has alleged.

First of all, this should be a government-to-government effort. A political party has got nothing to do with this unless our government, foreign minister and cabinet are not doing their jobs, or if a foreign government does not recognise our government.

There are cases of Malaysians brought back from China, Indonesia, Italy and many other countries that the government paid for. That should be the way.

MCA never paid for any cost of bringing Malaysians back from China. Indeed, MCA was never involved and should not get involved in the negotiation with the Chinese government.

From what had transpired and the claims made by MIC that it paid RM1 million, the Malaysian government is either not bothered of Indian Malaysians or has neglected them.

First, the discrepancy in treatment. Objectively, if we can fly back our people from Iran (including Singaporeans), why are we not doing the same for our citizens in India?

Second, why is it being outsourced to a third party - the MIC? If arrangements can be made for MIC to fly back Malaysian citizens, then why couldn’t arrangements be made for special flights from India to Malaysia and the government need not even pay for it?

Those who are stuck can buy their own tickets, as I understand they are willing to do so. It is just that there are no flights.

Third, why is the "mercy mission" only done halfway? What about the rest still stuck there? I read a comment which claims that "many" were not contacted. How were they chosen? By ballot? Please get real.

I do agree that politics should be put aside, but alas, unless a politician of some standing makes the points - as per Satees’ article - the matter would be forgotten. That is why we elect the assemblypersons and MPs to raise uncomfortable questions.

The simple fact is that all these comments do work and assist the Perikatan Nasional (PN) government to improve.

Finally, I have read comments that the Pakatan Harapan has run the government for "some time" and did a bad job.

Please, get real, Harapan was there for 22 months, after taking over from a government that lasted six decades and an empty coffer. What do you expect it to do?

Visu: There is no problem with getting the aircraft to fetch all those stranded in India. What is absent is a will from the Malaysian government to talk to the Indian government to get the flights to land and the people transported back.

MIC is playing a game in seeking funds from the public when it is not money that is required but a will by the Malaysian government to bring them back through diplomatic channels.

This is the job of our Foreign Ministry, the Malaysian High Commission and consulates in India.

Surely, AirAsia owner Tony Fernandez would not begrudge sending planes to fetch the stranded citizens as the return flights have all been paid for.

What is needed is inter-governmental clearance for it to take place.

Docsarna: Satees, firstly thanks for showing concern but at the same time, why can’t politics be kept away from this issue? You went on to blame MIC, which I myself am not fond of, but let me make it clear - many of those brought back were not at all politically connected.

I personally know some of them and they were just thankful to the whole team involved in the mission.

Yes, the foreign minister has a job to do and so far, nothing forthcoming has been announced by him. But still, you should not make a political move on that and instead advise him and if possible, cooperate with them.

SAC: What is DAP’s problem? If they wanted to, they could have got the Penang government to help those stranded. I am getting fed-up with this kind of politics where Indians in DAP attack MIC and Chinese in DAP attack MCA.

Please grow up. If you cannot help the people, just be quiet.

Sun: I am with MIC here. Get the job done and don't play politics. How will they even verify if the passengers were MIC members? Any reports of them having done so?

Come on Satees, see if the DAP can do something similar. Otherwise, just be grateful someone is helping out.

Mazilamani: If MIC’s rebuttal to Satees is the truth, then good work and congratulations to MIC and the MIC president. Thanks too for the hefty amount expended, partly from public generosity.

Maybe Satees feels that his party had lost a golden opportunity to do good for the community. If Satees is attempting to gain political mileage, then, sadly, this is not the time.

They are firstly Malaysian citizens, though most of our ancestors were originally from elsewhere.

Our new foreign minister should personally handle this deplorable situation, soonest, to avoid the world looking at it as racial bias.

Mano: Tell me, why are Indian Malaysians in India not being taken care of by Wisma Putra? Wisma Putra took the initiative to help bring back Malaysians from other countries but why not India?

Why was there a need for a political party to get involved? Their role should be to push the government to do it.

Iphonezours: The government needs to just get on with the job of bringing back all Malaysians, with whatever means and cost. The government has to foot the bill, that’s it, no one else.

Anonymous_13719: This is from my personal experience, my wife and I are both senior citizens and were in Punjab, India, on March 19. On that day, AirAsia sent us an email stating that our flight on March 20 was cancelled.

Immediately we emailed the High Commission in New Delhi of our plight. My daughter in Australia too emailed them for assistance. After no reply was received, she made arrangements for alternative flights out for us. Thank God we made it back.

Sad to say, to this day I have not got any reply from our High Commission.