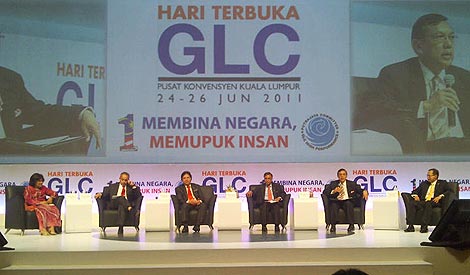 YOURSAY | GLC treasures should not be for politicians’ taking

YOURSAY | ‘PN considers GLC positions as the trophy of victory over the people's will in GE14.’

CES: Sharing the spoils of war has always been part of society since ancient times. The Mongols did it, the Romans did it and even the British empire did it. But as we became more civilised, it was less apparent as the concept of accountability became a part of democratic nations.

Malaysia, under former premier Najib Abdul Razak and a few other PMs before him, made it vulgarly fashionable. Pakatan Harapan did do something to arrest this decline in our political and social values.

In an illegitimate government, it becomes a necessity to survive by buying favours. But the disproportionate manner in which the loot is being dished out will sow the seeds of discontent within Perikatan Nasional (PN).

It is a matter of time before squabbles will result in a destructive implosion. To distract attention from the debacle, traditional punching bags like the DAP, the Chinese, the minorities and the Jews will be used to unite the fighting factions.

But it will only work for a short while. After that, this propaganda won’t be as effective as the people labour under harsh economic and social pressures.

Vgeorgemy: As a layperson who is reading this analysis. I am coming to see the devilishness in the defectors' mind those crossovers from Harapan to form PN.

They had known if Harapan continued to govern the country, the window of opportunity to loot the public wealth would close on them forever.

It is explicit that the treacherous elements in Harapan deliberately thwarted the effort that has led us into this situation now. Under the cover of the pandemic, they have distributed the wealth held by government-linked companies (GLCs) and government authorities as their spoils of war.

In history, foot soldiers viewed plunder as a way to supplement an often-meagre income, and transferred wealth became part of the celebration of victory.

At higher levels, the proud exhibition of loot formed an integral part of the typical Roman triumph, and Genghis Khan was not unusual in proclaiming that the greatest happiness was "to vanquish your enemies... to rob them of their wealth".

We strongly believe that the members of PN consider the chairpersonship and high positions of GLCs and government agencies as the trophy of victory over the people's will in GE14, and they strongly believe they have the right to loot our wealth and prosperity.

Harimau_Arif: Umno and PAS are both short-changed by Bersatu in the loot distribution when they contributed the most seats. MIC, needless to say, didn’t even get the scraps.

Umno warlords are waiting to pounce on Bersatu any day now to get their rightful share. There can only be one tiger in a mountain and that tiger is not Bersatu.

Straight Citizen: What a shame. Prime Minister Muhyiddin Yassin and his cohorts have been wasting all that precious time, which should have been used to properly steer the country through a pandemic and economic crisis, solely for themselves.

It was never about regaining Malay pride, it was always only about self-enrichment and to restart the gravy train. This is the Umno mentality through and through, just carried out by another party.

We've regressed back to the days where the government uses its power to line their pockets and reward their friends. Wake up rakyat, Harapan isn’t so bad after all, right?

It has been used by politicians to improve their financial positions. The salaries, perks, bonuses and the side incomes earned by giving away projects to political connections have put them in a better position to move higher in the political ladder.

It has nothing to do with the betterment of the companies they run.

GooseNBanter: Universiti Malaya professor of political economy Edmund Terence Gomez is stating the obvious when he said appointing politicians to head GLCs is not illegal. It is indeed legal.

The question is why the need for this dual responsibility? MPs are the voice of the rakyat in Parliament. They are the catalyst between the government of the day and the people who put them there.

It’s a huge undertaking that requires undivided focus and attention. There must be a scorecard requirement for MPs to spend at least 80 percent of their time on the ground, engaging with the people they represent.

It must be made illegal for MPs to be appointed as heads of any GLCs. Instead, GLC leaders must be selected through a stringent selection process of applications from technocrats hailing from the general population.

The way things are being done now is shameful and an abuse of the power vested in the government by the rakyat. You are government servants by virtue of the fact that you are put there to serve the people, not yourselves.

So professor, would you agree that the practice of appointing MPs to head GLCs should be abolished and henceforth a rule be enacted to make it illegal?

RR: Since there is no law yet, political parties must declare their policy publicly to the rakyat on the appointments of directors to GLCs, which should rightly be drawn from technocrats and from trustworthy and dedicated NGO leaders not linked to any political parties.

The rakyat will then elect political parties that are sincerely committed to serving the nation.

Ipohcrite: It's not the law. It's doing what is best for the country and rakyat. After all, if my memory serves me right, almost all the MPs in their election campaign have pledged to serve the rakyat as MPs, not as head of GLCs.

True professionals can be recruited to head the GLCs, not rewarding politicians with the spoils of war, as they call it.

Tango Bug: Spoils of betrayal, or spoils of treachery, or spoils of theft, may have been more appropriate for the headline of the article but probably using a well-known phrase is the least provocative.

Three thumbs up to Malaysiakini. The only thing missing is a side-by-side comparative diagram of Harapan appointments versus PN (after) and BN (before).

Umno MP questioned on new RM100m project one month after GLC appointment
25 May 2020
GLC post not a lure to leave Umno, Tajuddin says will remain loyal
22 May 2020
Daim: Why is wealth, power placed in hands of 'unqualified' few?
22 May 2020
Economist proposes new law to ensure good governance of GLCs
22 May 2020