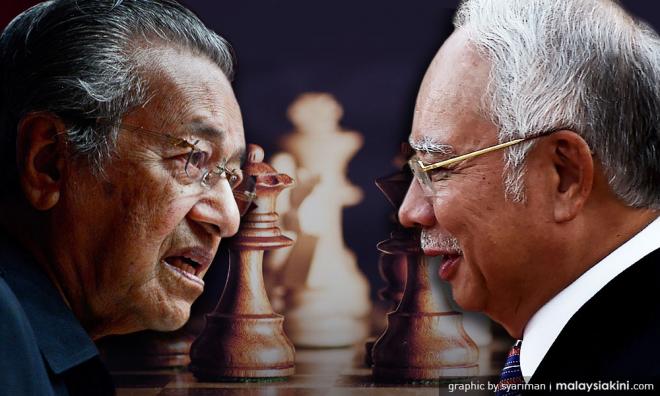 YOURSAY | ‘Dr M and Najib – the master and the disciple’

YOURSAY | ‘Mahathir might have perfected the art, but it is Najib that take it to the highest possible level.’

Fair Malaysian: See how two former PMs are hilariously squabbling who or whose family had the longest hand. Most of these facts are known already. But why should anyone listen to Najib Abdul Razak now?

He was in Dr Mahathir Mohamad's cabinet and must have known these deals then but had not been man enough to question the dealings.

Moreover, did he consider those deals repugnant? Didn't it occur to him that even if he couldn't stop the earlier deals, he could have stopped them when he was the premier and had the opportunity to stop such practices?

Maybe he subscribed to the slogan that "if he did it, what’s wrong in I doing it"?

You know what, you are all the same. It is not about Mahathir's sons or Najib's stepson but the millions of poor Malays who look up to leaders like them to give them a better life, but this "uplifting" business has been a magic wand for these scheming Malay leaders to build their mansions.

How they have the heart to allow their children to become magnates when you are in a position of trust?

Kural: Indeed, much of the contents of abuse of power and corrupt practices as indexed in what appears dirty linen washing endeavours of Mahathir and Najib has been speculated about in the public domain in some form or another for some time now.

This fresh onslaught by both against each other with more specifics of indiscretions of bias persuasions while in public office gives a form of directly ‘from the horse’s mouth’ validity on the accusations and counter-accusations.

This ugly back and forth and its attendant exposures should be eye-openers for much of their own community on the moral standing of these leaders who led them for a long while.

All these ad hoc efforts and attempts at recriminations hopefully would lead to mobilising a huge national confessional commission on former leaders’ roles, responsibilities and their wrongful motives and actions whilst in office.

The end results would surely be in the interests of the future wellbeing of the nation. Remember South Africa’s Truth and Reconciliation Commission that paved the way for functional multiracialism in the country?

Ours might lead to suppression of corruption and responsible management of public resources by elected officials.

Mazilamani: Yes, much has already been spoken and heard about the financial adventures of Mahathir, who has claimed innocence in all instances.

What Najib has said are only a few incidences, he is yet to expose the failed mega-projects under Mahathir's rule that run into billions if further challenged. Najib should know, for he had served the cabinet for a long time.

Many of Mahathir's cronies will already be cringing, less their names surface. Let Malaysians know the truth.

Foxx News: Years ago, I asked a friend why such and such politician doesn't expose the corruption within Malaysia? My friend laughed and said because each one of them has their own skeletons in the cupboard.

It looks like this is what is happening now - all of them have their hands in the cookie jar.

Let the orang kampong and Malays see who is the champion of money laundering and thieving that they have blindly supported all these years.

MS: This latest public washing of their soiled underwear will only endear them to their respective bases, which will view it as badges of honour.

The point which keeps eluding most non-Malay commentators is that none of this is shameful to the supporters of both Mahathir and Najib, or Muhyiddin Yassin or Abdul Hadi Awang for that matter.

None of this is likely to cause anger and trigger an exodus from their camps. Conversely, it will induce more to go to their sides in the hope of crumbs and contracts.

This is what their ‘perjuangan’ (struggle) really means - the perpetual struggle for more and more wealth through the dirtiest of deeds.

Mahathir correctly stated that Malays, in general, will not support multiracial parties (which arguably have less tolerance for corruption). Maybe that is why PKR leader Anwar Ibrahim is feared by them.

Undecided: @MS, I agree with most of your views, but I don't agree that non-Malays cannot understand the peculiarity of Malay behaviour.

I believe it is a combination of feudalism, religiosity, entitlement and fear. These human weaknesses have been pandered to by successive BN governments through indoctrination using 3Rs (race, religion and royalty) to the hilt.

If non-Malays are subjected to the same indoctrination, many may also end up the same way as all humans have the same weaknesses, especially if they have been given preferential treatment.

I don't blame the race. It is the bad leaders who want to keep them in chains and these bad leaders are the result of the system - a system of business preference that produces greedy leaders and cronies.

This shortcut to riches must end if we do not want such power crazy and greedy leaders.

PW Cheng: I fully agree with Najib on what is already known about Mahathir during his time in Umno. Fight as much as they like, but the common denominator here is Umno.

All the Umno scoundrels, past and present, share the same vision of their get rich quick schemes by plundering the country under the pretext of helping the Malays, taking the Malays as blind and oblivious to their shenanigans.

The only difference is Najib has exceptional ingenuity in the art of plundering but unfortunately, he was caught. Anyway, for Najib to cite Mahathir for similar wrongs during his tenure in Umno is like making two wrongs into a right.

Coward: Mahathir might have perfected the art, but it is Najib that take it to the highest possible level.

Naatamai: Yes, one showed the way, the other took it up another notch and the future ones, to unimaginable heights.

Of course, all for the sake of the 3Rs, they’ll say. Mind-boggling? Welcome to Bolehland.

Worried Sick: I really do not know what you (the reader) thinks but I am so worried and even sad to see what these men have done and why they, having enriched their own cronies and families, have made us ordinary citizens pay the debts for their greed for generations to come.

Have they no shame or soul? Must my beautiful granddaughters suffer the burden created by these politicians who are now arguing blatantly and shamelessly in public, for the rest of their lives?

I hope Malaysians true and upright will put a stop to all these dirty dealings and save our beautiful country for the sake of our children.