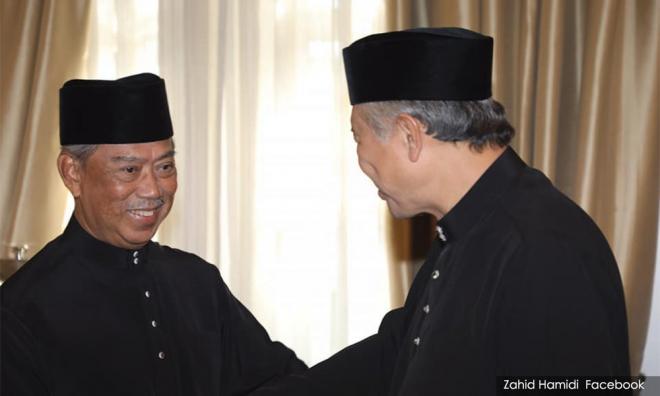 YOURSAY | Umno draws a line in the sand

YOURSAY | 'It looks like Umno is giving Bersatu the middle finger.'

IndigoToucan1627: This is the beginning of the end for Prime Minister Muhyiddin Yassin and Bersatu.

From the beginning of Bersatu's existence, it is obvious to everyone that this party is solely dependent on Dr Mahathir Mohamad.

For a few moments of glory, Muhyiddin brought his faction in Bersatu out of Pakatan Harapan. But his usefulness to Umno and PAS is only in bringing down the Harapan government.

Now that the Harapan government has been brought down, Muhyiddin and former PKR deputy president Azmin Ali have outlived their usefulness.

If Umno and PAS are confident enough, they don't even have to wait another two years to kick out Muhyiddin. It can be now.

David Dass: This was to be expected. Of course, Umno would claim seats that it is confident of winning.

This will leave Bersatu in a quandary. What is their bargaining position? They had only one card to play and they have played it - leave Harapan and form a government with Umno and PAS.

Does Umno speak with one voice? Shahrir Samad, Azalina Othman Said, Ahmad Zahid Hamidi, Najib Abdul Razak and others have called for a bigger role.

There are some who feel a snap election will resolve all questions. Nazri Abdul Aziz has suggested that Muhyiddin become the Umno president. Of course, that puts the cat among the pigeons.

What will persuade the Umno chieftains to agree? Interesting times, indeed.

Headhunter: No one owns a seat. You win and hold it for a term. After that, it's a free-for-all and whoever wins, he or she holds it for another term. That's how democracy works.

It looks like Umno is giving Bersatu the middle finger. If Muhyiddin rejoins Umno as predicted, it spells the end of Bersatu.

For Umno, that's killing two birds with one stone, reclaiming all their traditional seats and killing off Mahathir.

Clever Voter: Zahid has expressed what is to come. An Umno comeback is very possible, they need to do it with a bang and not with a whimper.

Umno superiority must be demonstrated in numbers, not as second fiddle to their discards. Umno will start to be more demanding as soon as the ‘get out of jail card’ is given, and as days pass, Muhyiddin may find his aces being reduced.

This is bad for the nation. Bad for the future. Umno as a party has not changed. Its DNA remains largely unchanged. They are seasoned politicians who need no introduction.

Fair Play: The line has been drawn by Umno.

1) All seats contested by Umno in GE14 and subsequent by-elections belong to Umno, according to Zahid.

2) These include those Umno frogs (13 MPs) who jumped ship to Bersatu after GE14.

3) Umno secretary-general Annuar Musa tweeted that he hoped Muafakat Nasional (the PAS/Umno coalition) could reach an ‘agreement’ with Bersatu - as a second fiddle for Bersatu?

4) Reference to 3) above, Muhyiddin is certainly not going to be the PM after GE15 if Muafakat and Bersatu combo win the election.

5) Muhyiddin certainly has to work with Harapan (minus Mahathir) for ‘mutual benefits’ in order to survive and leave behind his legacy as the 8th PM.

6) Reference to 5) above, let us see where DAP would stand - political principle or political expediency (to work with Muhyiddin as the government of the day).

Anwar, as Harapan leader, has already been empowered to work with any party - and this would likely be DAP’s justification for working with Muhyiddin.

7) If 6) above is the path that Harapan takes, there would likely be a deal between Anwar and Muhyiddin, especially after taking into consideration Muhyiddin’s health condition.

8) Finally, it is likely that Mahathir’s legacy is this - a) The longest-serving 4th PM, b) The shortest-serving 7th PM, and the biggest bang entry and the most pathetic and whimpered exit in Malaysian political history ever.

OrangeCheetah9224: Seriously, I don't see how Muhyiddin's Bersatu and Azmin's 10 political renegades can survive politically if a snap election is called before the year is out.

They have no safe seats to contest, with Umno and PAS unwilling to give up those constituencies where they are incumbents.

And for those seats where they have a fairly good chance of wrestling back from Harapan, they will certainly not give way to Azmin and Muhyiddin's party to contest.

Whatever political banner Azmin is using to contest in Gombak and Bukit Antarabangsa, he will be thrown out by the voters. The same fate goes to Muhyiddin's Pagoh constituency.

The non-Malays will definitely give their votes to Harapan. Muhyiddin's short political career as PM will end here.

Enlighten: It is reasonable for Umno to want to contest in all seats they won before. So what can Muhyiddin ask them to give up?

Not to be sentenced for corruption? These cases dropped before or after the election? Can they trust one another?

But some factions within Umno may not agree.

yoursay
pn government
umno
pas
bersatu
muhyiddin yassin
zahid hamidi
Related Reports
Muhyiddin congratulates PM Lee over S'pore polls victory
a month ago
Umno Youth chief: No choice but dissolution if Muhyiddin' motions fail
a month ago
COMMENT | The Harapan debacle: A clash of narratives?
a month ago
Despite rallying for Muhyiddin, PN registration still a sticking point for BN
a month ago