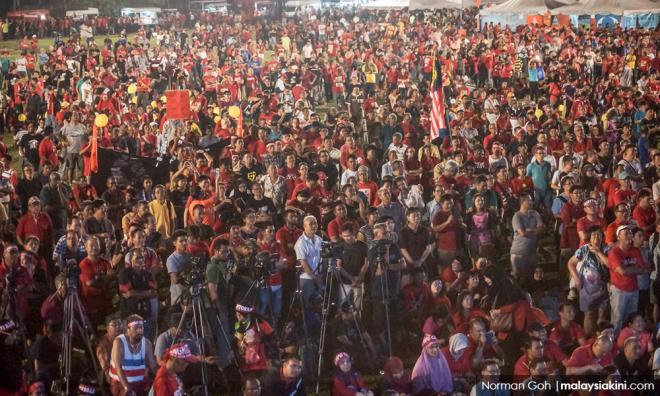 The reality is he cannot do it by himself.

The last time he managed to topple Umno was because PKR president Anwar Ibrahim agreed for PKR, DAP, and Amanah to support him. That’s called teamwork - without backstabbing.

So what are you talking about? It’s the people who gave Mahathir a second chance and they abandoned him after he started reneging on his promises.

So don’t try to justify Mahathir conning the voters. We, the rakyat, toppled BN. Not Mahathir.

Mk Follower: Now that Anwar has been chosen by Harapan to be their PM candidate, there are no two ways about it. From now on, will the two of you, Shafie and Mahathir, rally behind Anwar and give him all the support he needed?

If you really think that you are teaming up to topple the Perikatan Nasional (PN) government, why not show us some team spirit?

As much as you two have talked about your influence, please bring in an extra three MPs to topple the PN government. Just three only.

Semi Value: Shafie was not even with Harapan even after GE14. His party was an ally to the Harapan coalition. Then, even during the Sheraton Move, he was there meeting with the plotters.

Shafie, you said you have 109 MPs with you? What a joke. You just have nine seats and with Mahathir, you have 16. That's all.

Umno, which has had the biggest number of seats since 1955, had the privilege of choosing those who would be named as PM and deputy PM since then. How is it that with just a small number of seats, you want the PM post?

Constitutional Supremacy: Very well said by Shafie. Also very politely put. The case Shafie makes is very clear. Without Mahathir, the Malay grassroots will not move from Umno and PAS.

It is important Harapan takes back the people's mandate. The only practical solution is for Mahathir to be given six months before handing over to Anwar. Anwar has to trust Mahathir as things are different now.

The three parties in Harapan, if they go alone in case an election is called by October or November, will get less than 70 seats and will never see power again. The writing is on the wall for all to see. The Yang di-Pertuan Agong will also accept Mahathir as PM.

PurpleJaguar0553: It is unfortunate but Shafie is right. Most Malay voters in certain states as well as the hinterland are conservative and would support a Malay-based party only.

This has been the norm for 63 years and to expect that they would change and behave like the urbanites overnight is wishful thinking.

With the economy in trouble they will be even more hesitant to support a multi-racial party, more so when there were insufficient goodies for the poor in the last two budgets and no clear indication that they would economically benefit if Harapan is back in power.

Iphonezours: Shafie, you have more brains than some of the other politicians in Harapan. In reality, what you said is spot on.

The infighting for the PM post within Harapan has distracted and caused confusion to the extent that Harapan MPs are deserting to PN.

Fair Play: @Iphonezours, politics is a number game. You may be right that Shafie has more brains. But does Shafie have the numbers? If you think his nine MPs are good enough, then there is nothing to say.

OrangePanther1466: @Fair Play, Shafie is saying that if Mahathir is the PM candidate, then with Amanah, DAP, PKR, and Warisan supporting the Langkawi MP, perhaps a few more MPs may join in support.

For all you know, GPS may throw its 18 MPs behind Mahathir when they see that the nonagenarian is going to be PM.

GPS supported Mahathir for the premiership during the Sheraton Move period. Only when it became clear that Harapan had instead nominated Anwar as PM did GPS switch their support to PN.

WhiteCat3802: Shafie, are you as magnanimous as Anwar? If your nemesis had framed you, put you in jail, gave you a black eye, lied, and cheated you of your position, how would you feel? Will you still believe in him and pave the road for him to sit on your chair?

Is your godfather, Mahathir, so desperate now that he needs you to match-make both him and Anwar? Why don't you ask Mahathir why he needs another six months?

Also, what is the reason why he must sit on Anwar’s chair for six months when he had been given the agreed two years to solve or clear whatever problems and grievances he had?

Do you think he will honour his words when the six months is up or will he find all the reasons to deny Anwar the seat again?

Shafie, you should persuade Mahathir to support Harapan and Anwar because the component parties have already lost their trust and faith in Mahathir.

FellowMalaysian: Why is Shafie talking about Mahathir going for another six months for a third time as PM when Mahathir has clarified he is no longer keen on the post?

Granted, Mahathir was the person who gathered enough forces in GE14 and managed to dislodge Umno from the government. But that was only with the huge help from Anwar’s then 47 MPs, DAP, and Amanah. Without their help, Mahathir's Bersatu is just an insignificant party.

Shafie should explain why he is so against Anwar becoming the next PM when the Warisan president himself doesn't seem to be interested in the post.

Mahathir has failed to deliver during the two years of his government although he had unfettered control over every aspect of running the country.

Mahathir is history and if Shafie cannot see that, he must be blind.

yoursay
mahathir mohamad
anwar ibrahim
shafie apdal
pakatan harapan
perikatan nasional
Related Reports
Shafie visualises M'sia without racism, plans to use Borneo as new economic hub
a month ago
Shafie: MACC, IRB should not be used as political tools for intimidation
a month ago
Anwar and 'people's tsunami', not Dr M main factors for GE win - PKR Youth leader
a month ago
It was Amanah, DAP who suggested me, says Shafie on PM candidate issue
a month ago