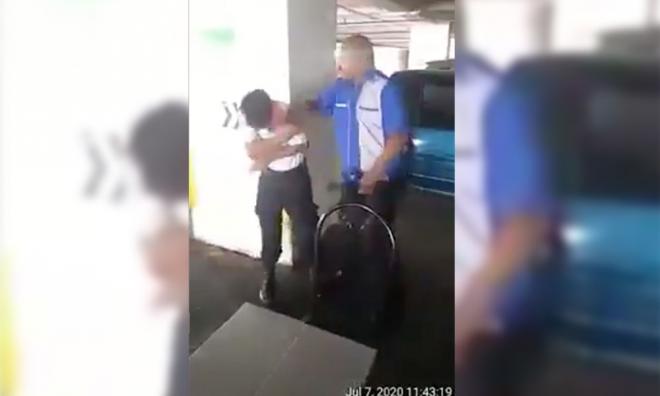 YOURSAY | ‘Are the authorities now going to arrest the Nepali guard for getting himself 'filmed'?’

BusinessFirst: How disgraceful. How troubling that he is able to assault another human being in such an uncouth manner.

The victim was quiet and did not resist. You would have thought that he would have some pity on him but instead, he just kept hitting and punching the victim continuously. I found it hard to watch the video to the end.

Al Jazeera raised an important issue about how foreigners are treated. Instead of dealing with it, the authorities seem more interested in how Malaysia would be perceived internationally. As if 1MDB, racist policies and rhetoric are not already well-known worldwide.

I also hope that we do not bring race or religion into this. There are good and bad amongst us all. Personally, I hope this video together with the Al Jazeera piece starts a serious conversation in Malaysia about migrant rights.

Recently I complained to a well-known developer that workers in their construction site were still pounding and working away at 3am in the morning! Aside from the noise to me and neighbours, I was also concerned about workers working on Saturday night through to Sunday morning at that time.

I got back no substantive response. Obviously, considering how 'big' they are, they probably feel they can act with impunity. For all you know, they probably are 'well-protected' too so they have no fear of public complaints until and unless it becomes viral.

Vijay47: What we witness in the video clip is not just the sickness that afflicts certain individuals, it is far worse.

It is a very prevalent attitude that has been nurtured over the years by an entrenched system where the powerful and influential can get away with almost anything, where the weak are there to be abused, ill-treated, and cheated. Bullying subordinates and the helpless is often the convenient fix for those wrapped in insecurity.

But nothing lends audacity like political might. We can remember a very high Umno leader who assaulted someone and absolutely nothing came out of it. Obviously, he has a foundation, psychological or otherwise, for his arrogant cruelty. Others casually indulge in looting and pillaging, though the July 29 verdict may have heralded a watershed change in crime and punishment.

Yet the bullying ways are not limited to the higher levels of authority - give a man a uniform and he thinks he is a field marshal. Walk into any building or complex and you will invariably encounter someone whose only form of communication is snarling at the public. However, the precious consolation we have is that there are also pleasant and civil officials in both the public and private sectors.

While unfortunate for him, this second case involving a foreign worker, a security guard, could be seen as a wider god-sent. We are reminded that ill-treatment of immigrants is a rampant preoccupation in some sectors. The sadder reality is that the system begets itself.

In Md Rayhan Kabir’s case (in the Al Jazeera video), there was not even minimal admission that the foreign workers may indeed be subject to institutionalised abuse, not a tiny promise that the situation will be scrutinised and remedied.

Instead, that poor worker was arrested and harassed for offences yet to be announced. All he did was to cry out for help. We wonder what fate awaits this Nepali security guard.

Malaysia Bharu: Cruel, hideous, revolting, disgusting - there is no word fit enough to express the sickening feeling viewing this video of the lunatic monster assaulting the small-built, almost under-nourished guard endlessly. What is even more worrying is from where does this culture of torture arise in this day and age?

According to Human Resources Minister M Saravanan, “The fate of every worker in this country ought to be protected, regardless of whether they are a migrant worker or local worker.”

What about treatment accorded to undocumented migrant workers, the subject of Al Jazeera's ‘Locked up in Malaysia's Lockdown’ video that the authorities are yet to offer a factual rebut?

What about others? Are these an indication of more sinister happenings such as the frequent deaths in detention centres? It is high time that those that abuse their power to beat up and bully others must be given a taste of their own medicine.

The import of foreign workers is a vicious circle where all involved from the worker's home country, the agents on both ends, the Malaysian authorities, the employers and other leeches enrich themselves while the impoverished immigrant worker comes in with a huge debt having begged and borrowed to pay the exorbitant levies of the various rent collectors.

Many of them are cheated by the agents through misinformation and by the time they get settled in their jobs that pays minimum wages, long hours and substandard accommodation, they wonder whether it was worth all the hassle, including the agony of separation from their loved ones.

But by then, most of them are caught in a choiceless quagmire as they have to work off the huge debts they had incurred back home to secure this facility which can take anything up to the first two years. It is the unkindest of cut to ill treat and abuse these poor and helpless souls.

Hearty Malaysian: This is modern slavery legalised by the powers-that-be for their cronies over many years now since BN days. It is high time the government clean up the system.

Oriole: Is this the employer? What a brutal beating.

If this is the employer, not only should this man be arrested, but the company licence needs to be revoked until the company can put safeguards in place to ensure that no guards will be abused after this. In fact, the authorities need to be looking at other security companies as well.

Apanakdikato: Is this how Malaysia treats its migrant workers, for which it is almost fully dependent on in many key economic sectors?

The government seems to be in a state of denial when the media highlights this widespread issue. This incident and many others only serve to give credence to Al Jazeera's recent report.

The relevant foreign countries should ban their workers from coming to Malaysia until the government and private sector can provide indisputable proof that their workers are not being cheated, exploited, harassed and mistreated.

In this video, the poor Nepalese could have suffered serious injuries including fractures. The Royal Malaysian Police (PDRM) has to act on this "animal" with the full brunt of the law, and not take a lackadaisical attitude just because the victim is a working-class foreigner.

Clever Voter: Beating up a fellow human being is unacceptable, and whatever justification one has the country does not deserve to host foreign workers. Not only are they are deprived of the necessary protection they are made to work longer working hours and subject to less than acceptable work conditions.

All the rhetoric about protection of Muslims and so on, there is every reason why we should conform to the universal human rights, especially human trafficking. Otherwise, we deserved to be treated as an abusive nation, and our exports will be boycotted by major markets. In some way, all of these are transparent in an interconnected world.

Pokokelapa: This is just the tip of the iceberg. It is not just physical abuse. There is also social and mental abuse in workplaces. Not only migrant workers but locals as well. Abuse is from top to bottom. Many dare not voice.

The authorities are silent but go after whistleblowers.

Majority Must Safeguard Minority Rights: So are the authorities now going to arrest the Nepali guard for getting himself 'filmed'? Is his work permit going to be revoked and sent back to Nepal?

Or is Finas going to fine the guy who took the video?