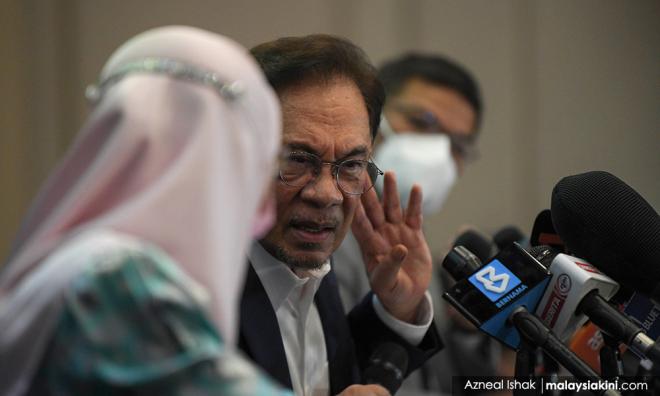 Simple Truth: Umno president Ahmad Zahid Hamidi, are you one of those who are supporting PKR president Anwar Ibrahim to form a new government? Why are you so quick to support the crisis of Umno and BN members crossing over to the opposition?

It sounds like you are enthusiastically confirming the reality of the situation. Did you get a deal from Anwar? A ‘get out of jail ticket’ perhaps?

OrangeJaguar9341: Wait, is Anwar really trying to form the government with Umno MPs? How is this returning the people's mandate?

Umno was the party we voted against. Is the rest of PKR supportive of this move to join hands with members of this racist and corrupt party?

How can you talk of upholding a common set of principles with MPs belonging to an unprincipled, power-hungry party? I sincerely hope I am wrong.

BusinessFirst: It could be that Zahid is using this (the Anwar Move) to threaten PM8 (Muhyiddin Yassin) on his court case.

I think Zahid is prepared to throw former prime minister Najib Abdul Razak under the bus if he can get off with either Anwar's or Muhyiddin’s help.

The next few days will be interesting.

I think this is a masterstroke by Zahid. Whatever you want to say about the honesty and integrity of our politicians, as political strategists they are champions. Pity they do not use their talents for the good of the country.

There are three scenarios for Umno, and none leaves them worse off.

First, they do a deal with Anwar and remain in government, strengthen themselves for GE15 and get let off from the various court cases.

Yes, there will be a hue and cry, but they are not the first nor the last (see Goldman Sachs, et al) that would escape justice. I am not talking here about morals, just realpolitik.

Secondly, whatever they hope to get from Muhyiddin before that he has not given them, they will now get and more by threatening to support Anwar.

Third, they destabilise the government and GE15 is called. Considering they lost GE14, they are getting a second bite at the cherry for free.

Aside from whether Muafakat Nasional is all hype, the simple truth is that Pakatan Harapan did not acquit itself well in its administration for 22 months with Dr Mahathir Mohamad and Azmin Ali pursuing their own agenda.

There is no right or wrong or fair or unfair. Life is delivering at the right time. There is no way Harapan will do better in GE15 than GE14.

Leading up to GE15, Umno/BN will show how traitorous Bersatu is with Azmin, etc, how unreliable PKR is with frogs jumping and how the DAP is as corrupt as Umno with court cases against Lim Guan Eng.

So, in reality, Najib is right to bring out his favourite snack and watch the show. However, I doubt in any of these scenarios Najib would come out unscathed. I think Umno is willing to throw him under the bus to "cleanse" itself.

Furthermore, I do hope that if Anwar gets to be PM with some help from Umno or BN, etc, it would be the best time to make low-hanging changes for the future of Malaysia which I believe would have bipartisan support.

1. All MPs regardless of whether opposition or government should get the same grant for their constituencies.

4. Attorney-general and the prosecutorial role is separated. Steps are taken to ensure independence. Malaya, Sabah and Sarawak must be represented in the roles of chief justice, AG and prosecutor. Now basically it is a Malaya show.

5. MA63 is fully implemented. Reducing the extremism and divisiveness in Malaya will take time, so having the refreshing multiracial society in Sabah and Sarawak will be a counterbalance to what we have in Malaya.

6. Devolve more power to Sabah and Sarawak as nations within Malaysia.

7. Devolve more power to the states in Malaya, including some law enforcement.

8. Deal with the stateless bumiputeras in Sabah and Sarawak and give them their rightful status. Not everyone has money to pay (and bribe) to get their rightful inheritance.

9. Local council elections are held so that someone is accountable for all the daily problems, clogged drains, etc, rather than wait for a minister to attend to such things.

YellowZebra4720: Indeed, Umno has very cleverly played two hands in this game. Whether the government changes, they'll always be in the loop.

In any event, this great phenomenon of ideological emulsification is extremely damaging to multi-partisan democracy before it ultimately leads to convergence of ideologies - something that destroys the fabric of democracy.

YellowMarlin8834: In the end, Anwar will be used by Umno. Harapan will be played out again. If a snap election is called, Umno and PAS will have a good chance.

Even if Anwar gets his numbers with the help of Zahid and gang, that speaks volume of what type of person Anwar is.

On the other hand, Mahathir has refused to work together with these corrupted fellas. So, do not think highly of Anwar. Both of them are villains in their own ways.

Fernz: Zahid, facing numerous cases in court, seems to be fishing in troubled waters by saying that Umno MPs in their individual capacities may be supporting Anwar.

He said it's the Umno MPs who are in the Muhyiddin government, not Umno and BN, which are not components of PN.

But Zahid will not be able to put pressure on Muhyiddin by making such a statement. His court cases will go ahead. Both PAS and GPS have denied supporting Anwar. Racists like PAS and GPS will stick with Umno. PBB is ‘Umno in Sarawak’.

Anwar cannot influence the Sabah election by claiming to have overthrown the Muhyiddin government. The people still remember the insulting statement made by a Warisan lawmaker on the armed forces.

The Agong will not entertain Anwar and those frogs. He will not allow Anwar to enter the palace. He may or may not point in the direction of Parliament. Or he can just keep quiet and "buat tak tahu".

Muhyiddin is unlikely to advise the Agong to consent to the dissolution of Parliament. If advised, Agong can withhold consent.

In that case, Muhyiddin is unlikely to resign. The scene will shift to Parliament, the proper forum.

YOURSAY | Muhyiddin gets a dose of own medicine