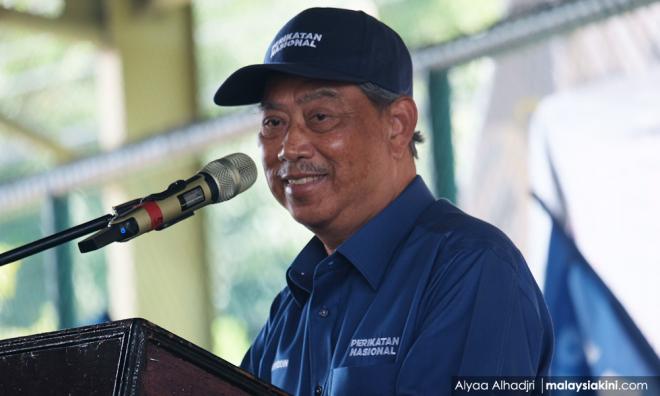 YOURSAY | 'Muhyiddin, why do you even need the AG to affirm that you are still the PM?'

Vijay47: Prime Minister Muhyiddin Yassin, this is more confusing than Confucius, and alas, your earlier bravado seems to be fast dissipating.

First, how does the attorney-general (AG) get into the picture? He does not decide on the appointment of the prime minister and in any case, I don’t think Idrus Harun would be able to draw any conclusion – he has not received any statutory declaration (SD) from a previous AG.

The part that is really confusing in your scenario is where you claim that if Parliament is dissolved, Anwar would be the prime minister-in-waiting. How would that be?

If he is already prime minister following his audience with the Yang di-Pertuan Agong, Anwar would hardly want to have Parliament dissolved, especially since, as he claims, he would have a “formidable majority”.

For better or worse, in Covid-19 or in health, Anwar would be our prime minister, the third this year, and waiting is not necessary, thank you.

The only one now itching to end Parliament is you, Muhyiddin, since you hope that a general election might provide you with at least some frail straws to cling on to power.

Should it come to the dissolution of Parliament under your watch, you would be the prime minister-in-waiting, not Anwar. Who is the scholar writing your script?

Vgeorgemy: Muhyiddin must admit that he has lost the majority and his regime lost legitimacy in governing our beloved land.

The Perikatan Nasional (PN) regime, at any point in time, has not sought the confidence of the Dewan Rakyat.

A mere government employee in the name of attorney-general (AG) cannot determine the authenticity of a regime that has lost the majority in the Dewan or interfere in the constitutional rights of the citizens.

The AG has no role in determining the intention of the rakyat and is not a member of the Dewan Rakyat to express his views officially. We do believe that what the AG said is his opinion, and not representing the view of the population.

The regime has lost its legitimacy to govern our nation. It must accept the tradition of the parliamentary democracy by handing over the resignation to the head of the country, our beloved king, to exercise his constitutional duty.

Century Egg: Time for you to go, Muhyiddin. You brought in a host of undesirable characters into the cabinet and our GLCs (government-linked companies).

They were not what the majority Malaysians voted for. They defied SOP (standard operating procedure) during your governance and were not reprimanded hard, compared to the ordinary men and women.

Your team of ministers and head of GLCs are poor negotiators when it involves national interests. Plea bargains were done and compromised, allowing crooks off prison terms.

Many accidents happened on the roads yet I don't see the transport minister on the ball, rather your ministers were more eager to capture Sabah into your fold, spending considerable time campaigning there.

During your governance, politicking was heavy and non-stop. These are what you will be remembered and etched in the annals of Malaysian modern history.

Malaysia Bharu: Muhyiddin's competence and lust for power are for the people to judge and whether or not PKR leader Anwar Ibrahim is lying is best left to be determined by a neutral party, such as the Agong or the Parliament.

It would be unwise of Muhyiddin to drag the AG into this political conundrum of who has the majority support. Moreover, as a recent appointee of the backdoor regime, the AG is himself an interested party.

Since the Agong is not well enough to receive the contending parties, the alternative place to settle this matter is the Parliament, where Muhyiddin can submit to a vote of confidence, whereupon, if necessary, the options are weighed by the Agong.

Hmmmmmmmm: Muhyiddin, why do you even need the AG to affirm that you are still the PM? So far, all Anwar has done is announce that he has the numbers to topple you.

This has not been tested yet. So, of course, you are still the PM. Surely, you don't need the AG to tell you this?

MS: The attorney-general has affirmed that you are still the prime minister? You mean the one you appointed?

Anak JB: It will take a while for AG to come to a decision on the legality to change the top job in the country.

He is still struggling to charge Plantation Industries and Commodities Minister Mohd Khairuddin Aman Razali, even though it is a very straightforward case.

Kawak: "I am not power crazy," said Muhyiddin.

That statement is dishonest. If he is not power crazy, there won't be the Sheraton Move and the buying over of MPs.

IndigoToucan1627: Even if Anwar succeeds, there is still no guarantee that there will not be another coup.

To carry it even further, even if a GE is declared, there can still be coups as long as frogs are allowed to jump. To put a stop to this nonsense, a law should be passed to prohibit party hopping.

If an MP should want to hop, he should resign and a by-election called. Then and only then, will an elected government be assured of full tenure of office.

CrocodileDundee: I guess it's time to send some of our elected MPs to Tanjung Bahagia for mental valuation.

It's utterly wrong, by any standard, for an MP to go against the will and the mandate of the rakyat, no matter what his/her excuse may be.

For the sake of our nation, all political parties and stakeholders should sit down and draft a policy to make party hopping illegal, with attached mandatory life jail terms, especially after winning the mandate of the rakyat.

It's an open secret that all race-based parties are a ticking bomb for our nation. Please wake up before it's too late. After 63 years of independence from the British, is this the best we can do for our nation?

Morning Glory: "I think I have done my job," said Muhyiddin.

So, are you done, for good? Use the front door to exit, please.

Discontent in Sabah could push Umno MPs into Anwar's arms
28 Sep 2020
Agong undergoing follow-up treatment, will return to Istana Negara soon
28 Sep 2020
COMMENT | DAP should give us a list of people it will not work with
28 Sep 2020
YOURSAY | Will Anwar's 'reformasi' turn into 'reformati'?
28 Sep 2020