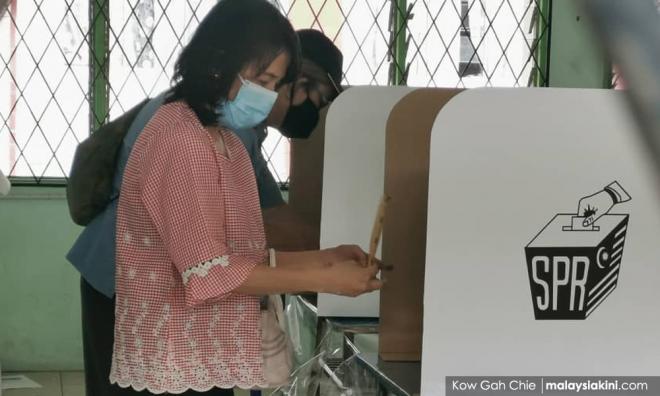 YOURSAY | What have we learned from Sabah polls?

YOURSAY | ‘Perhaps, this country may have seen the last of a govt having a two-thirds majority.’

1. Warisan Plus parties lacked strong machinery, especially in rural areas. BN has the advantage of having good machinery which involved most of the people in the constituency. This makes any new candidate/party look like they are there for the election only.

2. There was disappointment among some Warisan Plus supporters in terms of inadequate deliverables by the Warisan government. Again, a strong BN point. Pakatan Harapan is unpopular in rural areas because its rule did not translate into immediate gains while nearly everybody is connected to BN through contracts, business, and scholarships.

3. KDM (Kadazan Dusun Murut) continue to be suspicious of Warisan Plus due to illegal immigrant issues, tied to long-standing ethnic suspicions involving disempowerment and displacement - a long-standing distrust that cannot be solved in the short-term.

A surprising fact is the Christian KDM distrust of the Muslim Bajaus. This does not augur well for Sabah as this leads to a broader trend of polarisation.

FairMalaysian: Sabah and Sarawak politics is quite different from what is discoursed in the peninsula.

Of course, politics has to be divisive but the variables, derivatives and their deliveries are different. With peninsula parties making deeper inroads in Sabah, it will be with much consternation that the divisive factors, particularly race, has started to emerge as imprints.

Sabah, I mean Sabah politics, has both been a headache and heartache that essentially had held to ransom Malaysian politics, particularly peninsula politics. In these, politicians and people are losers.

Peninsula politics differ - over here the dominant factor will be race and religion of one group and good governance/concerns on corruption of the other.

Between these two dominant groups, the race-and-religion bait is clearly identified with a majority of Malays, while good governance/concerns on corruption have followers from all the three major races.

There has been a dip among the Chinese in the support for the DAP and much has been written on this. What the DAP ought to know is a bird in the hand is worth two in the bush. It shouldn't make the same mistake Umno made.

Unlike the euphoria that Perikatan/Muafakat Nasional and BN are displaying, hoping the victory in Sabah could be repeated in the peninsula, they are going to be surprised.

Even in Sabah, elections to federal seats may take a different course, unlike the results of the recently-held state elections.

Amanah is too weak and has been largely ignored by the Malay electorate. DAP has seen a dip recently because of its affinity with former prime minister Dr Mahathir Mohamad and "MCA-type" politics.

That doubt lingers, and instead of looking for additional tracts, it will be advisable to retain whatever is already in hand and then build from that.

PKR is certainly not the PKR of GE 2018. It needs to bring in younger leaders such as Rafizi Ramli and Nurul Izzah to the fore. Ignore this to your detriment.

Prime Minister Muhyiddin Yassin and Bersatu probably know that it is with Umno in the background that it managed to win seats in Sabah.

There has been discontent brewing within Umno on this and there seem to be increasing voices that Umno is strong enough to be on its own with its original coalition partners as that will give it the leadership and control it always had and would like to revive.

Perhaps, this country may have seen the last of a government having a two-thirds majority. The concern of the hour is how can any party take along with it the interests of all races.

The toxic politics of race and religion has done untold damage and politicians are not at all concerned what a future Malaysia will be if this continues.

No one has the will nor the courage to bell that cat but that deep psychological impact has bedevilled the country as never before and set back the clock in our progress. The clarion call should be to ban parties based on race and religion and making it a crime to seek votes citing race and religion.

Of course, we never had a government that really made "unity" as its core belief as that may not get votes.

PAS will not survive even a second if it chooses to abandon race/religion politics and instead tell Malaysians how it can economically uplift Malaysians. It has built its entire political structure on the dictum of race and religion and this would unequivocally mean pitting different races against one another.

While much of my hope has dissipated, it may largely depend on the politics of the younger generation to reset and change the course of the present political train.

Dr Dani: Don't forget the other factor, the undelivered promises to the simple folks that (combined) represents over 15 percent of Sabahans.

These are very, very simple folks. Simpler than kampungs folks. These folks, between the outer and deep forest, don't expect and want much. They might not be able to contribute much either. But they have the power to decide who to take care of their very small welfare.

This was where Warisan failed. BN has succeeded because they'd gone to the deepest jungle catering to these small needs for many years.

IndigoOtter9291: This is indeed a good insight into what had happened despite some anticipation that Warisan Plus would win in the state election.

This should be a good lesson for Warisan Plus on the importance of mobilising their supporters and not to forget, keep improving their service to the rakyat.

As the saying goes, empty vessels make the most noise, so Warisan Plus should focus more on serving the people and also honing their election strategies and how they could overcome the ‘cash is king’ tactic used by the opposite coalition in buying the poor and socially disadvantaged people's hearts especially when Covid-19 has impacted everybody, no matter where you live.

YellowFish9545: It looks like Sabah is destined to be just like Sarawak - a rich state on paper but with shabby infrastructure and development.

I guess they should blame themselves for not choosing their government wisely. Instead of climbing trees for better internet, the new government will resolve the problem immediately by providing everyone a ladder…