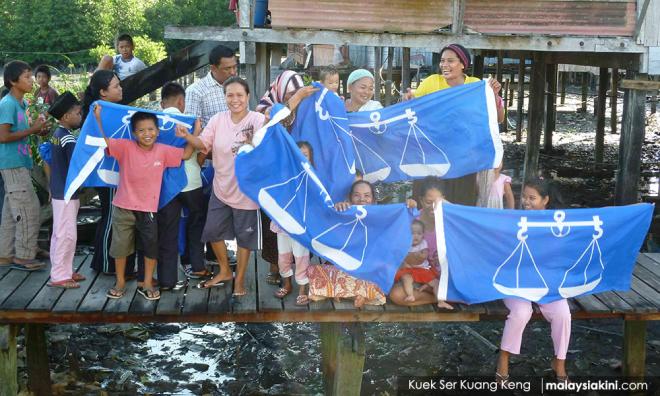 YOURSAY | ‘I fear Sabahans will continue to lament the lack of opportunities in their state and travel to work in Malaya.…’

Hajiji sworn in as CM, deputies Bung, Jeffrey and Joachim

BusinessFirst: The voice of the voters must be respected. The people of Sabah have chosen Gagasan Rakyat Sabah (GRS) and so they must live with GRS, no matter the good or the bad. Self-serving frogs and all.

Like Kelantan, I fear Sabahans will continue to lament the lack of opportunities in their state and travel to work in Malaya for years to come.

Their families back in the kampung will continually badger them to contribute money for food, for school books, and even to renovate their homes - all the while continuing to complain about the lack of opportunities and about their poverty. I know many who are going through this who work in the same company as I do.

Yet, when elections come, a few sweet-talking politicians appear with food and gifts. They then vote for the same people who keep them in poverty.

Their children from the peninsula tell them of the evils of these politicians but they are ignored because of the "short-term" feel-good benefits. The cycle then repeats from generation to generation.

We can only blame ourselves. We get the government we deserve.

GreenQuokka4577: @BusinessFirst, my thoughts exactly. How can we break this vicious cycle? It is more or less like the chicken and egg story.

Kampung folks long to be better off than their current situation. At the same time, they are so poor that instant cash for their vote actually helps them to put food on their table for at least a few weeks.

We can only hope that when the time comes, the younger generations will vote for a change.

Harjit Singh S/O Rattan Singh: Newly-sworn Sabah Deputy CM Bung Moktar Radin is facing charges for corruption and yet he can be appointed to such a position. That is great. I believe we do not have enough clean politicians to lead our nation.

This goes to show that most politicians are not clean. Politicians who are facing criminal charges unashamedly and unabashedly accept important positions.

I don’t blame the politicians. I blame the voters who continue to vote such leaders in.

LrdfM: This state cabinet line-up is to benefit the politicians and not to benefit Sabahans. There are no justifications for a state to have one chief minister and three deputies.

The three ‘tigers’ may be satisfied for now but the CM will have sleepless nights controlling these three tigers instead of managing the state.

And Justice For All: That’s definitely the Malaysian way to do it. Appoint three people to do the job of one. Well done, Chief Minister Hajiji Noor. So if something happens to Hajiji, then who becomes the CM?

Is there a senior deputy chief minister like how Senior Minister Azmin Ali is to Prime Minister Muhyiddin at the federal level? Or do they follow Dr Mahathir Mohamad’s method, i.e. the three of them need to show who has the majority support from the state assembly?

VioletFish0943: Indeed, why three deputies? Who are you serving - the rakyat or your pockets?

Is this what you call in the interest of bangsa, agama, dan negara (race, religion, and country)? Can the taxpayers have legal recourse?

The Wakandan: @VioletFish0943, Sarawak has been having three deputy CM, purportedly to represent the major ethnic groups in the state. If a Malay is CM, then it is made sure that an Iban and a Chinese are the deputy CMs.

Sometimes, there are two Iban deputy CMs because of two Iban parties in the state government, similar to the present Sabah PBS and Star, which are KDM predominant.

Again, unlike the Ibans, the KDM are not as homogeneous - the Kadazans, Dusuns and Muruts are quite distinctively different from one another.

Fortunately, or unfortunately, this is the tested winning formula. Give everyone something. For political expediency, at the end of the day, what matters is to keep everybody happy.

When they can point out that they have been remembered and were rewarded for their votes, that’s when you know they are satisfied - until of course, when another demand arises. BN is the master of this and that's why they can survive for a very long time.

Face it, it is always and will be, “What's in it for me?”, one form or another. For some, it is money, others, prestige and recognition while others, ideals.

YellowMarlin8834: Congratulations, Kadazan-Dusun-Murut (KDM) voters. Do not blame anyone except your own foolishness to choose these politicians to control you.

By having so many deputies and portfolios, these politicians are only looking after their own pockets. Serve you right!

Kepala Tak Centre: @YellowMarlin8834, don't blame the KDM. They are just fed up with other immigrant races in Sabah, especially the Sulu and Pakistanis.

The influx of immigrants has completely changed the racial and religious dynamics in Sabah since 1963 until now. So, they prefer to vote for KDM-based parties.

Kepala Tak Centre: We will see now, will Jeffrey Kitingan as deputy CM be able to clean Sabah of illegal immigrants from the Philippines, Indonesia, and Pakistan?

Or is he just an empty tin making a lot of noise with no substance?

Mild532: @Kepala Tak Centre, they have been obsessed and very manipulative with the illegal immigration issue all this while.

Let’s see if they have the guts, especially PBS and Star, to resolve the illegal immigration issue once and for all.

Sayonara MY: There will never be peace in Sabah. Four tigers on a hill will just kill each other.

Unhappy Umno will not work with Bersatu. Every party, every leader, will want a piece of the pie and there is not enough to go around.

So, guess what is going to happen? The in-fighting in the federal government will be replicated in Sabah.

YOURSAY | What have we learned from Sabah polls?