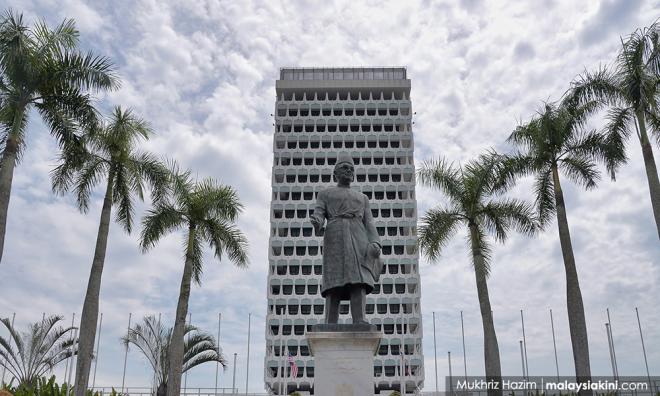 YOURSAY | 'There are no honourable men left in Malaysia'

YOURSAY | 'No matter how much he tries to spin, Azmin is still the architect of Sheraton Move.'

Azmin: PN plan came from Dr M to ensure he could continue as PM

IndigoTrout2522: Senior Minister (Economy) Azmin Ali can now spin and spin but no matter how much he tries, he is still the architect of Sheraton Move.

He had planned and schemed along with Dr Mahathir Mohamad and Muhyiddin Yassin to stop Anwar Ibrahim.

Through his treacherous manipulation, he got to convince the rest to participate in the plot to start Perikatan Nasional (PN).

For The Love Of Malaysia: If one is to have an open mind on the matter, Azmin is a great politician of the highest level. After all, every politician is ambitious. And the winner takes it all.

The crisis was created by Mahathir himself. He sowed the seed of discord with an ultimate aim of not passing the PM post to Anwar.

Azmin has done well even when he was the Selangor menteri besar. If not for the sex video, he is definitely a good candidate for the PM post.

Unspin: Azmin's logic is really twisted. Even if Mahathir had not resigned and become the PM of the new grouping, PN is still "backdoor" because the majority of the rakyat did not vote for the corrupt BN (Umno, MCA, MIC, GPS, etc).

Evidently, Azmin has zero remorse that he and his team betrayed the wishes of the voters who voted for Pakatan Harapan.

As for Mahathir, he cannot pretend that he has nothing to do it. His legacy will forever be remembered as an untrustworthy politician who divided and ruled, but finally got stabbed in the back by his equally untrustworthy fellow plotters.

Across the Straits: We are all naive and believing. Naive in believing the storyline of the big snake that he is a changed man during the heat of the election.

Behind all the facade of respectability is an angry frustrated recalcitrant man with a black heart. I can sense that my countrymen are mostly feeling betrayed by the big snake.

Now, the big snake has trained a second generation of young snakes to copy his methods and continue his legacy. That suits the big snake to the tee.

The country can only reset if, and only if, we can cage all these young snakes. My countrymen, wake up from your slumber. Be ready to kick all of them out in the next election. Your vote will make a big difference.

Talon: The cat is out of the bag and Azmin is spilling the beans about Mahathir who claims that he is an honourable man.

There are no honourable men left in Malaysia. Will Mahathir come out with guns blazing from the hips and put the traitor out of circulation? Or will he maintain an elegant silence and still maintain he is an honourable man?

Frankie: Indeed, Azmin just confirmed that Mahathir, all along, had planned to hold onto the PMship and have no intentions whatsoever to pass the baton to Anwar.

A promise from Mahathir is just that, a promise. Never fulfilled.

Daylight: Thank you for confirming what most people have long believed or suspected. However, that has not made the co-conspirators any less innocent.

Low Class Coolie: Azmin, why do you continuously glorify your despicable act, an act so abominable where only the likes of you shamelessly broadcast yourself as the saviour when in reality you are a lowly traitor?

A pact was made with a gentlemen’s handshake. You and your cohorts betrayed Harapan’s trust. Now the whole country, except those in power, are suffering and struggling to put food on the table while you enjoy ‘lobster and crab’ lunches.

Kunta Kinte: As the saying goes, there is no honour among thieves. As more was revealed, it became abundantly clear that there is the intention to cheat right from day one.

You not only cheated your coalition members; you also cheated the rakyat. All you want is to get rid of Najib Abdul Razak so that you can be at the throne.

The rakyat will not be cheated twice, see you at GE15.

Bosskuku: Never before have politicians stolen something so dear from the people - their power to vote for a government of their choosing.

Even Najib, having allegedly stolen billions, wasn't as sad and humiliating as the PN government's rise to power.

CH Y: The reformasi movement represents a departure from past Malaysian experience in terms of its aims, scope and institutions. The movement urged Malaysians not just to vote differently but to actually think differently about politics.

In encouraging true multiracialism, reformasi leaders advocated the adoption of a unified political culture, in which all subsets of citizens in the Bangsa Malaysia nation will pursue a broader and non-exclusive goal.

Crucial to the progress of the movement is the scope of its support. More Malays, including middle-class Malays and those associated with Islamic organisations, got involved.

As these Malays had contact with the grassroots through their organisations such as Abim (Muslim Youth Movement of Malaysia) and Jamaah Islah Malaysia (JIM), the movement drew considerable support from lower-class Malays in the rural as well as urban areas.

Even among older Malaysians, they are at least sharing political space with the younger ones.

Just A Malaysian: Azmin, you did not explain the most key point. Why have you and your cohort, who went to GE14 with a promise of reforms, inclusiveness and good governance, turned against every promise you made to the voters?

Why did you revert back to the dark days of Umnoism? Why was your battle cry of reformasi being discarded once you were in power?

YOURSAY | Azmin’s explanation will not move the needle