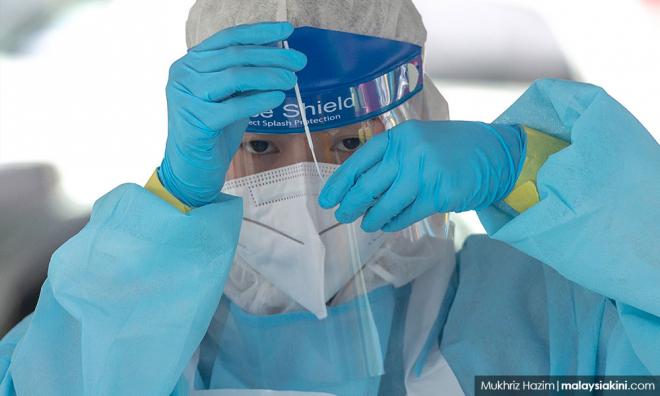 Klang Valley states and territories accounted for 48.8 percent of the new cases followed by Sabah (18.0 percent) and Johor (16.4 percent).

In Selangor, there were 152 cases that were detected through "other screenings".

According to the state health department, nearly half of these were screened after developing symptoms or have sought private screening.

The figures showed that 68 sought testing after developing symptoms including one healthcare worker, and other patients that had developed a severe acute respiratory infection. Another six tested positive during voluntary screening at private laboratories. Learn more about "other screenings" here.

For Johor, the state reported 205 new cases today compared to 115 yesterday and 118 the day before. Johor cases last exceeded 200 on Monday where 276 cases were reported.

Two deaths reported were from Sabah, and another was reported in Selangor. The cumulative Covid-19 death toll for Sabah stood at 257 or 57.2 percent of the national total (449).

Details of the three victims are as follows:

Patient 98,986 – Male, 65, non-Malaysian. Body brought in to Duchess of Kent Hospital, Sandakan, Sabah. Had a history of high blood pressure and gout.

Health director-general Dr Noor Hisham Abdullah did not hold a press briefing and communicated through a press statement.

He is not scheduled to hold a press briefing until Sunday. Therefore, no RT-PCR test numbers are available today.

A breakdown of the new cases are as follows:

No cases were reported in Kedah, Terengganu, and Perlis today.

The Tembok Gajah cluster involving the Kluang prison complex had the highest number of new cases (113 cases). The area had been under enhanced movement control order since Dec 19.

Penjara Jalan Haparan cluster had 86 cases. It originated from the Sungai Buloh prison in Selangor but has spread to other states such as Malacca and Johor.

The Puncak Galaksi cluster in Kuala Selangor and Klang, meanwhile, had 51 new cases.

The Health Ministry also classified four new clusters. The highest number of cases was from the Cassia Diamond cluster involving the districts of Klang, Kuala Langat, Hulu Langat, Kuala Selangor, and Gombak districts of Selangor, in addition to the Barat Daya district in Penang.

The index case tested positive on Christmas eve after reporting symptoms, and a further 24 cases were identified amongst his social and family contacts. A total of 76 people had been screened so far in this cluster.

Likewise, the Pompod cluster in Kota Belud and Kudat, Sabah, had also spread through social and family connections.

The index case tested positive on Dec 13 after reporting symptoms, and 216 people had been screened. Thus far, 19 cases have been detected.

Meanwhile, the other two clusters were detected through targeted screening at construction sites.

The Kiara Construction Site cluster was detected in Kepong, Kuala Lumpur, when 372 people had been screened so far since Dec 21. There are 13 cases in the cluster so far.

The Perkasa Construction Site cluster in Cheras, Kuala Lumpur, meanwhile, reported 11 cases after screening efforts began on Dec 22. There are 11 cases detected in this cluster as of today.