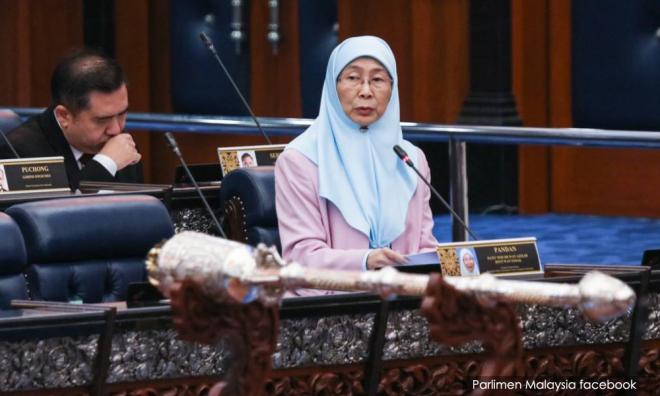 On the eve of Merdeka, Wan Azizah Wan Ismail in an interview, defended her actions in the Kelantan child bride case, saying that the child was "well taken care of", was "not together with the man" and was never "in immediate danger". The minister also claimed she had "passed on" the child to Thailand in order to "take care of her welfare".

The public has waited patiently for a clear explanation from the Women, Family and Community Development minister as to the actions taken in the child bride case, only to be given these unacceptable and factually wrong claims.

Firstly, the DPM's claim that the child "was not together with the man" is plainly false. In fact, the paedophile husband had access to the child throughout the period she was under the jurisdiction of Wan Azizah's Ministry of Women, Family and Community Development. This is clear from the paedophile's own admissions in various published media interviews in July and August.

Wan Azizah's claim that her officers had left the child with her parents as she was not in "immediate danger" is thus a deliberate misrepresentation of the real facts.

In fact, the UK Guardian newspaper revealed over the weekend that the 41-year-old paedophile "husband" had sexual relations with the child.

Is this true? If so, it is a horrific violation of an 11-year-old child. Wan Azizah must come clean on this.

In this context, it should be remembered that civil society and the public had made repeated demands that the child be protected; the only response to which was silence or evasions by the women's ministry.

In contrast to our minister's cavalier attitude, Thai authorities announced a total ban on access to the child upon her arrival on their soil.

Secondly, it is appalling that Wan Azizah speaks of "passing on" the child to Thailand. This is an 11-year-old child, and not a thing or a property.

"Passing on" the child to our neighbouring country was, in fact, an inexcusable abdication of duty by a sitting minister.

This is because the child had lived all her life in Malaysia where her parents had also lived for 20 years. The poor girl does not even speak the Thai language.

Yet the minister had no qualms to pluck her out of the home and environment she has known all her life and send her off to an unfamiliar country.

Is this Wan Azizah's idea of "taking care of her welfare"?

Surely, the ministry with its huge resources must be capable of taking care of the child here in Malaysia. Surely, deporting the child and her parents to Thailand is not the answer to the problem.

As women's minister, Wan Azizah has an obligation to ensure that the child receives the best protection, care and counselling here in Malaysia.

To make things worse, neither Wan Azizah nor her ministry informed the public that the child had been packed off to Thailand. They kept quiet. The public became aware of this only through a media statement by the Thai authorities.

Most sickening of all, in a transparent attempt to mitigate the circumstances of this child bride case, Wan Azizah claimed in her interview that the child is "as tall as her mother" although only aged eleven.

As a medical doctor, the DPM must know that although a child may show physical maturity, it does not mean that she has the mental awareness and understanding required for marriage and marital relations.

It is excessively disturbing that Wan Azizah offers this physical maturity as a mitigating circumstance for the child marriage. It raises serious questions as to whether she is really committed to ending child marriages in Malaysia.

The writer is executive director, Lawyers for Liberty.