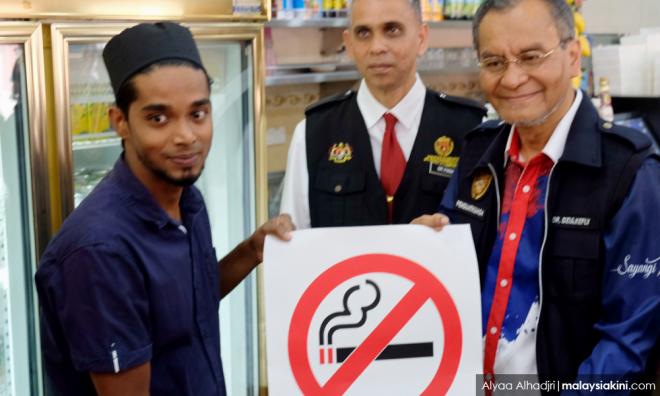 LETTER | The Consumers’ Association of Penang (CAP) welcomes news of the introduction of the long-awaited standalone Tobacco Control Act to replace the Control of Tobacco Control Regulation (CTPR) 1993 which was ironically placed under the Food Act 1983.

It is hoped that the Health Ministry (MoH) will plug up all the loopholes that exist in the CTPR and anticipate how the tobacco industry will evolve in the future.

We have to understand that smoking is about nicotine addiction and the maintenance of the level of nicotine in the blood.

The concept of traditional smoking is going to be archaic because the tightening control of the World Health Organization (WHO) Framework Convention for Tobacco Control (FCTC) will force the industry to think beyond the conventional parameters.

Hence, the way forward for the industry is to adopt brand and product extensions so that their products will not be within the definitions of most countries’ tobacco control laws or the FCTC.

The industry knows that any legal amendment may take months, if not years, to enact. Thus, it will be ahead in thwarting the tobacco control effort every time.

After Malaysia’s ratification of the FCTC in 2005, we noticed a sudden increase in fanciful packs that we suspect was an experiment by the industry to test how far they could push their products in 2008.

That was the time when we saw the flip pack; the button pack; fruit flavours; the inclusion of inserts and various kinds of sleeves for the packs.

Some of the sleeves are meant to conceal pictorial health warnings (PHWs) if PHWs were implemented; such pre-emptive action by tobacco companies came a year before FCTC Article 11 concerning PHW was introduced!

Over the years the CTPR underwent numerous amendments including the introduction of pictorial health warnings in January 2009, at that time it was 40 percent of the front and 60 percent of the back of the pack.

Misleading descriptors such as ‘light’, ‘mild’, ‘low tar’, ‘premium’, and ‘full flavour’ are banned on the packages. However, this did not deter tobacco companies from circumventing the ban with creative and fanciful names such as ‘Advance Hybrid’, ‘Double Burst’, and ‘Ice Blast’.

At one time, in an attempt to circumvent the issue of infamous secondhand smoke, vaping became popular for a while with the industry arguing that what is produced from vaping is largely vapour. The government then banned e-liquids that contain nicotine because “unauthorised selling of nicotine is considered illegal”

The vaping habit did not catch on because users were terrified of the numerous cases of exploding vaping devices; studies that it can cause ‘popcorn lungs’ (if the e-liquid contains a chemical called diacetyl); vaper's tongue and other diseases; the ban of use of nicotine in e-liquids and a host of other problems.

With many countries banning smoking in public places, tobacco companies have to think of other means of indulging in nicotine addiction such as by tobacco chewing and more recently, by using heat-not-burn devices.

Snuff and tobacco chewing had been discussed among tobacco companies as alternatives to by-pass the secondhand smoke problem in enclosed places.

Heat-not-burn products have also been found to be unsafe last year because a new study offers fresh evidence of health risks associated with their use.

The definition about cigarettes in CTPR is rather narrow as “any product which consists wholly or partly of cut, shredded or manufactured tobacco derivative or substitute, rolled up in a single or more wrapper of paper (our italics), and which is capable of immediately used for smoking”.

The Tobacco Control Act has to be formulated beyond the definition of cigarettes to include all tobacco-based products, products containing nicotine, or anything for use in the same manner as tobacco products. Unless they are for medical purposes and prescribed by a doctor.

Philip Morris International announced in January 2018 that it is going to stop selling cigarettes completely in order to achieve a “smoke-free” future. It might be true because PMI announced the introduction of ‘heat-not-burn’ devices as a potential replacement.

CAP has for decades been an advocate for tobacco control and with its experience is willing to work closely with the MoH.

The Tobacco Control Act should also synchronise with other laws, particularly those pertaining to smuggled cigarettes for which we call for mandatory jail sentence and confiscation of the goods and property of those involved in illicit trade.