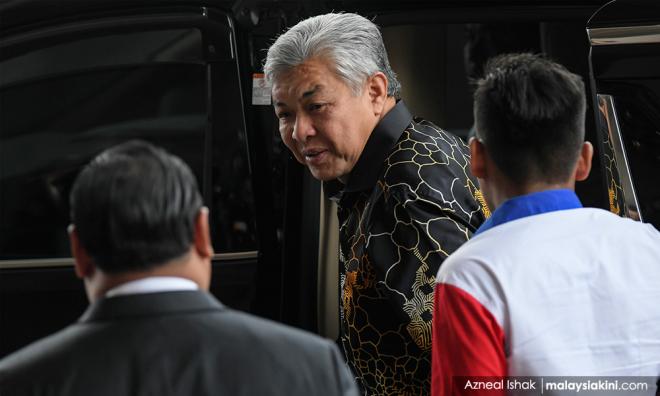 Is there a deeper political game happening?

LETTER | I refer to the Malaysiakini article, "I'm back! Zahid announces return to active duty as Umno chief". As someone who is not a member of any political party, Ahmad Zahid Hamidi's (photo, above) return is of little consequence to me.

But as an avid political observer, I believe Zahid's return has something more than meets the eye. First of all, Zahid is coming back to active duty as Umno president barely 48 hours after being slapped with a record total of 87 corruption charges.

Any politician facing such a long list of corruption charges amounting to hundreds of millions of ringgit would have temporarily taken a backseat from active duty, if not resigning from the party altogether.

Therefore, Zahid's return was counter-intuitive for a party which had won three consecutive by-elections since he went on leave last December. Furthermore, the timing couldn't have been more jarring considering Umno is trying to rid its baggage as a party that thrives in rent-seeking.

It stands to reason that his return from "garden leave" is part of political gamesmanship that is rapidly unfolding in the corridors of power. It was hardly coincidental that Zahid being slapped with so many charges came on the heels of the alleged power-play between Anwar Ibrahim and Mohamed Azmin Ali, following the latter's alleged gay sex scandal. Both are contenders to succeed Dr Mahathir Mohamad as the eighth PM.

It is also no secret that Umno MPs are split over whether to support Dr Mahathir or Anwar. Zahid is known to back the latter as he has a long history with Anwar, including having once served as his political secretary. It wouldn't be far-fetched to imagine that the charges against Zahid were timed to influence the numbers game in the event a revolt is mounted against Dr Mahathir by way of a vote of no confidence in Parliament, which resumes meeting this week. Zahid's return yesterday was a show of strength within Umno.

Umno secretary-general Annuar Musa confirmed in a media interview on Sunday that his party had been wooed separately by Dr Mahathir and Anwar's supporters should the two go separate ways. Annuar also confirmed Umno MPs were divided over which side to take if push comes to shove.

These developments must also be seen in the context of the controversial forfeiture suits filed by the Malaysian Anti-Corruption Commission against 41 individuals and organisations. Already questions have been raised over why certain political parties or individuals friendly to the Federal government were spared. Some parties also questioned why newly-appointed MACC chief Latheefa Koya (photo) decided to go down this road when the attorney-general himself had asked for the 1MDB criminal court cases to be postponed.

And in the midst of all these, Haziq Abdullah Abdul Aziz posted an open letter to Mahathir over the weekend pleading for fairness from the PM over the sex video scandal. The timing of the letter only raised more eyebrows.

Looking at all these individual developments from a holistic view, there appears to be a recurring theme or a common thread that ties them together. The levers of power are being pulled in this high-stakes political chess. And this much is clear - the puppet-masters are not some mid-level bureaucrats. The breadth and scope of the operations suggest this extends into the deepest core of power in Putrajaya.

Were there outright abuses of government machinery? The government owes the nation an explanation. We've had enough of that in the past and certainly do not want to see it reappear. This is not the Malaysia Baharu voters had hoped for when they kicked out Barisan Nasional last year.