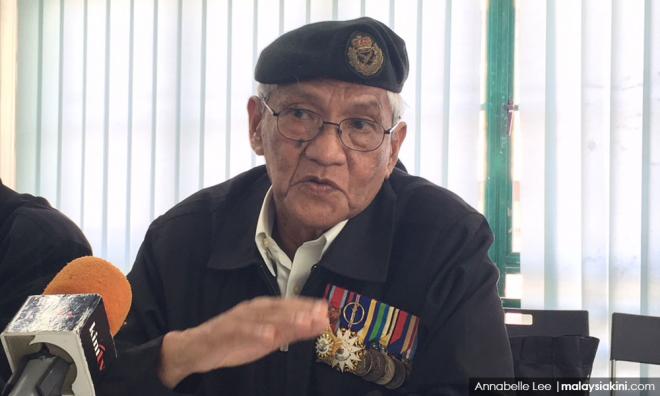 LETTER | Patriot is made aware that there is currently an organised personal attack on our president Mohamed Arshad Raji (photo, above) and also our association.

We observe a pattern whereby cyber troopers will seize on anything written ill of Arshad and disseminate the recycled insults and lies in the Malay language social media.

The latest of such attack is an article, ‘Sudahlah Presiden Patriot’ (That’s enough, Patriot President) by Ridhuan Tee Abdullah in Ismaweb.net on July 7.

Defending Najib and Umno, Ridhuan argued it were Umno leaders who were in power and decision-makers then, and therefore it was correct to say Umno members participated in the fight against the communists.

He had the impudence to suggest to Arshad to retire quietly, to be close to the mosque, and stop trying to please the Pakatan Harapan government so as to secure a high position in government. He was mischievous and insulting.

Ridhuan further insulted Arshad by stating that he was nothing compared to a real hero like the late Warren Officer Kanang Langkau. In the article, he mentioned that Kanang was a leader of a special tracking unit for a special operation which successfully killed five enemies, captured one, and Kanang himself got shot three times and lost his kidney.

Truth be told, Ridhuan got all the above facts wrong. I was the officer, then Second Lieutenant Wong Ang Peng, who was specially tasked and received direct orders from the then CPO Yuen Yuet Leng to lead a special tracker team to locate an enemy camp.

Following closely was a company of men led by Captain Othman, ready to launch an attack once the enemy camp was located. Sergeant Kanang at that time was part of a platoon directly under the command of Captain Othman.

In that incident, Captain Othman, with other officers (yours truly included), led the company to attack and kill five enemies. We lost two soldiers. We did not capture any enemy. Kanang was neither shot nor injured during the firefight that lasted 45 minutes. The incident when Kanang got shot and lost his kidney happened two months later.

The facts show that Ridhuan was either lying or he got the stories mixed up to serve his own agenda. His honesty and integrity are in question, which is also a case in point where he was alleged to have plagiarised others’ work. In academia, plagiarism is a very serious and unpardonable crime.

Ridhuan Tee is an Umno political apparatchik whose survival depended on his ability to spew out venomous words of hatred on behalf of his political patron.

The tone, content, choice of words and factual accuracy of his arguments berating Patriot and its president are reflective of the level of his intellectual capacity and his ability to argue logically and objectively.

Patriot does not wish to lend any credibility to Ridhuan’s statement that is without basis, distorted, lack merits and contains bare allegations that are inherently devoid of truth.

The writer is Captain (Rtd) of the Malaysian Army and director of public communications, Persatuan Patriot Kebangsaan (Patriot).