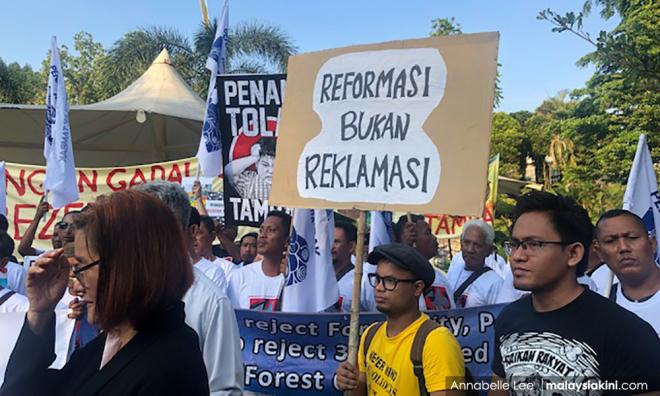 Much for Penang to gain with PSR

Published 6 Nov 2019, 11:00 am
Modified 6 Nov 2019, 11:31 am
LETTER | Did the protest against the proposed Penang South Reclamation (PSR) project at the Esplanade on Monday actually represented the views of 1.8 million Penangites?

As a Penangite, I'm sick and tired of these non-stop demonstrations organised by non-governmental organisations who are neither voted to represent us nor speak for us.

In fact, why were there placard-holding foreigners among the demonstrators? They are not stakeholders in the future of Penang but yet the organisers made use of them. I'm wondering if those among the 300-odd demonstrators were even Penangites in the first place.

The fishermen in Tanjong Tokong whom I spoke to said that what was going on in the south of the Island did not concern them but they were ''requested'' to lend their voices.

At the end of the day, it is all about compensation. Perhaps, the fishermen are looking for big money. They have been misled by self-serving politicians and NGOs that they should agitate and get as much as possible by putting in little effort.

When the fishermen get what they want, do you think they will have the same care and concern for the environment and marine life?

The fishermen have all to gain by supporting the PSR. With the project, fishermen and their children can take up new careers, with better income and working conditions.

Penang's plan to reclaim new land bank for industrial and commercial expansion and to build an integrated transport infrastructure can help reduce unemployment. We have high-skilled graduates. What we lack are high-skilled jobs.

If Penang doesn't take the initiative to develop, it will risk being left behind in the sea of change sweeping the region and end up as another Asian backwater.