Editors and journalists from major news outlets in Malaysia have issued a joint statement, the first of its kind in the nation’s history, blasting the government’s violence against journalists covering the Bersih 3.0 rally last Saturday. 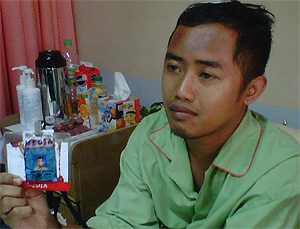 It alleged that the authorities had acted upon “orders from above” that resulted in members of the press being intimidated, harassed, assaulted and arrested while on duty.

It called on the government to take firm action against the perpetrators and to live up to its claim of democratic reforms and media freedom.

The statement in full:

We, members of the journalism fraternity of Malaysia, appalled by the attacks on journalists covering the mass public rally on the streets of Kuala Lumpur on Saturday April 28, and by restrictions imposed on media coverage of the rally,

CONDEMN the use of intimidation and violence against journalists,

CONDEMN all actions preventing journalists and the media from providing full, fair and accurate coverage of events that are of concern to Malaysians,

CONDEMN the action of media organisations in withholding reports or being complicit in a news blackout of attacks on journalists,

CALL FOR immediate and firm action by the government of Malaysia, the Ministry of Home Affairs, and the Royal Malaysia Police against all those involved in these acts of violence and intimidation to prevent journalists from carrying out their duty and depriving Malaysian citizens of fair, full and accurate journalism; and

CALL UPON the government of Malaysia, the Ministry of Home Affairs and the Royal Malaysia Police to give their assurance of firm action to ensure the safety of journalists at public events and to protect the right of all journalists to cover public events without fear of violence and intimidation, and without interference from the authorities. According to published reports and information from our colleagues:

The action by members of the police force, apparently acting on orders, or ' arahan dari atas ', was taken directly against journalists engaged in carrying out their duties and clearly aimed at preventing journalists from reporting accurately on events that they witnessed, and in several cases to specifically prevent them from reporting on police action to disperse the rally. 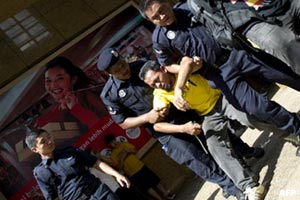 These actions on the ground are in direct contradiction of the Malaysian government's declarations of respect of the rights of journalists and the mass media, and of the Government's intention to carry out reforms for a vibrant Malaysia media that will hold its place in the world media community.

It is the duty of all journalists and of the media to provide full, fair and accurate reports and keep citizens informed of current issues that are of concern. Violence and intimidation are acts of censorship to prevent public knowledge of these events.

We urge the Malaysian government, and especially the Ministry of Home Affairs and the Royal Malaysia Police, to live up to their responsibilities to safeguard the role of the media in carrying out their duty to inform the Malaysian people, and to ensure that journalists are able to report freely without intimidation and interference, especially from the authorities.

This statement is included in an online petition to the government of Malaysia, and is supported by more than 250 signatories.

Do you have photographs or video clips depicting police brutality, or any forms of violence, during Bersih 3.0? Let us help you share them with Malaysiakini readers. Contact us here: [email protected]