The group which gained prominence after waving their posteriors in front of former Bersih co-chairperson Ambiga Sreenevasan's residence is now threatening to do the same against news portal Malaysiakini . 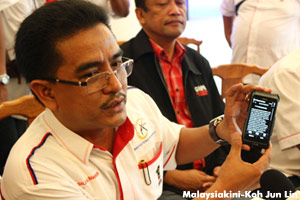 Armed Forces Veterans Association chief Mohd Ali Baharom ( left ) said he will organise a second series of the butt exercise in front of Malaysiakini's office in Bangsar if it did not apologise over its report on the prime minister's wife, Rosmah Mansor.

"I will do a second series in front of Malaysiakini (office), like how Ambiga was defeated.

"This is my promise to Malaysiakini if they do not apologise to the prime minister's wife," he told a press conference in Kuala Lumpur today.

Also present at the press conference were 14 other NGOs under the Gabungan Sahabat 1Malaysia secretariat.

Mohd Ali, better known as Ali Tinju, was upset over Malaysiakini's report of Rosmah lamenting that she did not have time for her hobbies as she had to serve the rakyat.

"Rosmah's actual statement was that she was busy working for the rakyat that she did not have time for her hobbies but Malaysiakini reported differently.

"What she meant by 'hobby' was playing badminton, she did not say that the rakyat stole her time," he said.

At an event on Feb 27, Rosmah was quoted by Malaysiakini as saying: "“Everything has been taken away from me, including my time, including my hobbies. I don't get to play badminton now because I am very busy doing things for the rakyat".

The video which was recorded by KiniTV can be viewed here .

"Why does Malaysiakini not spin when Rosmah gives out contributions or visit fire and flood victims at Bandar Tun Razak?

"Why Malaysiakini does not spin good things? Why not glorify and congratulate the prime minister's wife?" he said.

Mohd Ali praised Rosmah for her charity work and for being professional.

He gave Malaysiakini seven days from today to apologise publicly or face his wrath.

Mohd Ali said he had the capability to mobilise up to 10,000 people in front of Malaysiakini's office.

"But for me, there is no need for that... We will just come with 20 to 30 people and hand over a memorandum.

"That is better. If we bring 10,000 people, the shops cannot do business and it will be difficult to control..." he said.

He added that if the protest goes ahead, it will be peaceful.

"We will abide by the rules and get police consent first... there will not be bottles, glasses or pistols, we will come with only a letter to voice our protest," he said.

In 2012, the group had pulled off the butt exercise in front of Ambiga's residence as a sign of protest for her involvement in the Bersih 3.0 rally in the Kuala Lumpur.

Read more from this author :
Nigel Aw
Read more like this :
#
Most Read
Most Commented
Most Recent