Najib Abdul Razak's in-law Maira Nazarbayeva allegedly threatened to hurt a businesswoman by citing her relationship with the Malaysian prime minister, according to the New York Post .

Quoting a Manhattan federal lawsuit, the report said Maira had been accused of taking a dozen Hermes handbags worth US$400,000 (RM1.7mil) without paying. 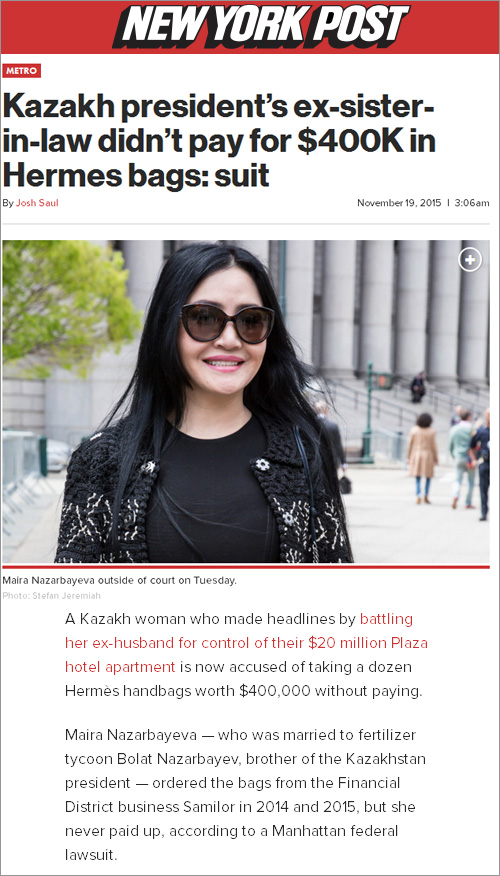 The Kazakh woman reportedly ordered the bags from the Financial District business Samilor in 2014 and 2015.

"You know who my son is! He is son-in-law of the prime minister of Malaysia. I will hurt you and your family if you sue me!" she allegedly said.

The New York Post said a lawyer for Maira did not respond to messages seeking comment on the issue.

Maira is the ex-wife of fertiliser tycoon Bolat Nazarbayev, who is the brother of Kazakhstan President Nursultan Nazarbayev.

Bolat has also sued Maira and her son in a Manhattan court, reportedly claiming they are both international "serial swindlers who stole a $20 million condo at the Plaza Hotel" from him.

Malaysiakini has contacted Rizal Mansor, the aide of Najib's wife Rosmah Mansor, for comment and is awaiting his response.

Malaysiakini has contacted Maira's publicist and is awaiting response.

PMO aide: Maira's use of Najib's name a one-sided claim