Allegations that Maira Nazarbayeva used the name of her in-law Prime Minister Najib Abdul Razak to threaten a businesswoman is merely a one-sided claim, an officer with the Prime Minister's Office (PMO) said.

The claim, first reported by The New York Post , is contained in a civil suit by Samilor Enterprises president Bella Belkin against Maira for allegedly refusing to pay for US$400,000 (RM1.7 million) worth of Hermes handbags and subsequently issuing threats when payment was demanded.

Malaysiakini has contacted Maira's publicist and is awaiting a response. 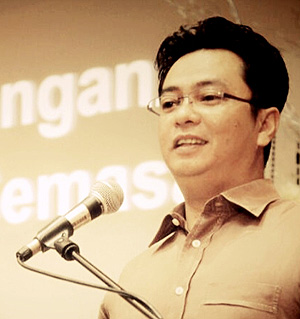 Rizal ( photo ) refused to comment further, stating that the incident had nothing to do with the PMO.

"We can't give any comments, unless it involves the prime minister or Rosmah. Then I can comment," he said.

According to court documents filed with the Southern District of New York, copies of which have been obtained by Malaysiakini , it is claimed that Maira threatened Bella and her family on three occasions.

The first threat, where Najib’s name was allegedly used, is said to have taken place during a telephone conversation on June 16 this year.

The document claims that Maira said: “You know who my son is! He is son-in-law of the prime minister of Malaysia.

Maira's son, Daniyar Kessikbayev, is married to Nooryana Najwa, the daughter of Najib and Rosmah.