It was four years since Tunku Abdul Rahman bellowed 'Merdeka!', but 12-year-old Zurinah Hassan could use more freedom herself.

Amid the rice fields on the Kedah-Perlis border village of Tikam Batu, the precocious girl found herself bored at home.

“We had no entertainment like how it is today. I was not free to play around like boys.

“Boredom led me to listen to the radio, and stories of bangsawan (noblemen) and poems were played on air,” she said.

Named the first female National Laureate in October, the mother of five has come far from those listless afternoons when she ached to escape the drudgery of the slow-ticking clock.

Yet looking back five decades, she believes it was those dull days that she credits for setting her on this illustrious path.

With the bangsawan tales as her gateway out of the cloistered confines of her home, Zurinah tried her hand at the subtle art of Malay play on words.

‘An educated girl was not worth as much’

1961 was also the year Malaysia’s Education Act was enacted.

With the British grammar school model was replicated across the fledgling nation, children were parcelled out in starched uniforms in the early mornings to seek the education which war, occupation and poverty denied to their parents.

Zurinah was one of those children, starting at the Malay school in Tikam Batu, to the English school in Sungai Layar about 15 kilometres away, then to the Sungai Petani Convent for secondary education and finally graduating from the Sultanah Asma secondary school in Alor Setar.

But an educated girl was not as valuable, she said. 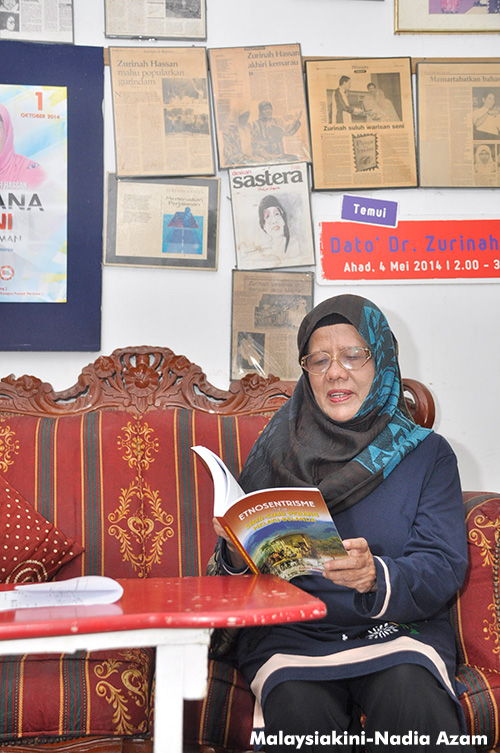 It was more difficult, she said, for girls to become writers then. After a certain age, a girl was expected to be in the kitchen, not burying her nose in books.

Despite the distance she had to travel to school, and the obligations set upon her as a young woman of the household, she made time to pen down her work.

Bereft of a typewriter, she would write and rewrite her drafts by hand.

Then when they were finally ready, she would travel out again, this time to the post office, one single question throbbing in her head – would the publishers in the capital city find this worthy of publication?

The duel of Tuah and Jebat

In the 50 years of writing, her work has developed not just in depth, but in focus.

Like many Malay writers of the era, Zurinah started writing on social issues – the plight of the Malay farmers and fishermen in the villages in a nation on the cusp of something new.

In the aftermath of the 1969 race riots, and as the nation grappled to find out who it really was, Zurinah’s work reflected this by asking the meaning of her own existence.

The 1980s saw the poet’s views reflected inwardly through the eyes of a wife and a mother, followed by her return to a more modern, fast-paced Malaysia and the role of Malays in it in the decades after.

In several lyrical poems published in the last decade, Zurinah explores the question of loyalty, and the dilemma this poses modern Malays.

In her poem ‘Jebat Yang Tak Jadi Menderhaka’ (The Jebat Who Decided Not to Rebel) she explores an alternate version of the Malay folklore of the loyal Hang Tuah and the mutinous Hang Jebat.

The poem starts with Jebat, who is desperate to avenge his friend Tuah when Tuah is wrongly banished by the sultan.

Yet Tuah pleaded to him to remain loyal to the sultan, so Jebat hold his tongue and takes over Tuah’s role in the palace as decreed.

Because Jebat chose not to rebel, he remains a decorated aide to the sultan, the monarch sleeps soundly, the state of Malacca remains stable, but Tuah, the protagonist’s wronged best friend, dies alone, banished in the jungle.

[WATCH: The duel between Tuah and Jebat, as depicted in the 1956 film 'Hang Tuah']

The poem starts after Jebat's protestations of the sultan’s unfairness to Tuah echoes in the palace halls.

Tuah weeps at the dilemma he faces – how can he decide, to uphold a government and its unjust ruler, or to be cruel to a friend who is only standing up for him.

He makes the most difficult decision he has to make in his life.

Before he drives the keris into his best friend’s torso, he tells Jebat that it is not the wicked sultan he is defending but the longevity of the Malay sultanate and the fate of its people.

Being named one of only 13 National Laureates is her greatest achievement so far, she said, but the journey is far from over.