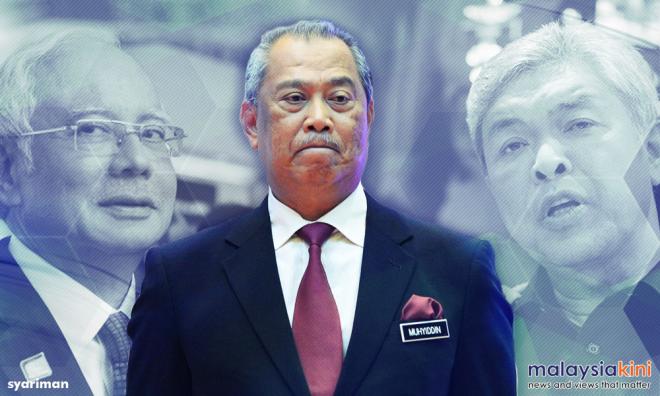 Suspended Umno deputy president Muhyiddin Yassin today acknowledged that the "black episode" of Prime Minister Najib Abdul Razak's financial scandals and his struggle to stay in office have made people more matured, and stressed the need for reforms in the country.

He said the mere rejection of Najib was not enough and changes to the country's laws and political institutions are needed.

"I think the black episode happening in Malaysia is making us more mature.

"If we want to see Malaysia return to a respected country where the rakyat can live a more prosperous life, we need to be prepared to demand for changes.

"It is not just to demand the prime minister step down but to reject a political institution that has failed to fulfil the aspirations of the rakyat.

"Set aside racial, religious and ideological sentiments to get the rakyat's consensus towards forming a government that is just, trustworthy, and with integrity," he said in a statement this morning.

The statement came after the Umno supreme council yesterday suspended Muhyiddin as party deputy president for his criticisms of Najib.

Muhyiddin's acknowledgement of the need for institutional changes is significant as the opposition and civil society have, in the past, refused to aid the dissenting Umno faction for fear it is only interested in removing Najib and retaining the same system.

PKR vice-president Rafizi Ramli had previously said that the opposition may only consider joining forces if the dissenting Umno faction was interested in genuine institutional changes .

Muhyiddin in his statement said among the reforms needed is to curb the power of the prime minister.

"I will continue to voice out to uphold the truth and demand for holistic institutional reform.

"The prime minister's power to advise the Yang Di-Pertuan Agong in the appointment and sacking of the attorney-general must be curbed.

Muhyiddin said he is prepared to stand with the rakyat to "save Malaysia".

"The rakyat must rise up to oppose tyranny and wrongdoing. Save Malaysia!

"I am prepared to stand with you in this struggle. Do not fear for the almighty is Allah," he said.

Will Muhyiddin cross the Rubicon and quit Umno?

Umno vs Umno in the next general election?

'Ex-AG showed me proof on Najib and SRC, it was clearly a crime'

My suspension not according to procedure, decries Muhyiddin

Najib: Gov’t not a dictatorship, it's elected

Muhyiddin tells of turncoats in Umno, laments erosion of virtue

Why didn't you defend yourself, Shahrizat asks Muhyiddin

Sack if Muhyiddin 'does it again', says Tengku Adnan

'Muhyiddin had ample reminders before he was suspended'

Was Muhyiddin on high seas when hammer fell on him?

Ambiga: It took guts for Muhyiddin to admit systemic problems