The feud between PKR and DAP over six overlapping seats is still unresolved. Both opposition parties are holding press conferences at the same time but at different locations in Kuching today.

The DAP’s meet-the-press event is for the launch of its campaign manifesto.

Follow our LIVE BLOG as the Malaysiakini team in Sarawak brings you the news as it happens.

10.15pm - Kuching: Sarawak Chief Minister Adenan Satem in a question and answer session with journalists defends BN's fielding of a former mufti in the election. 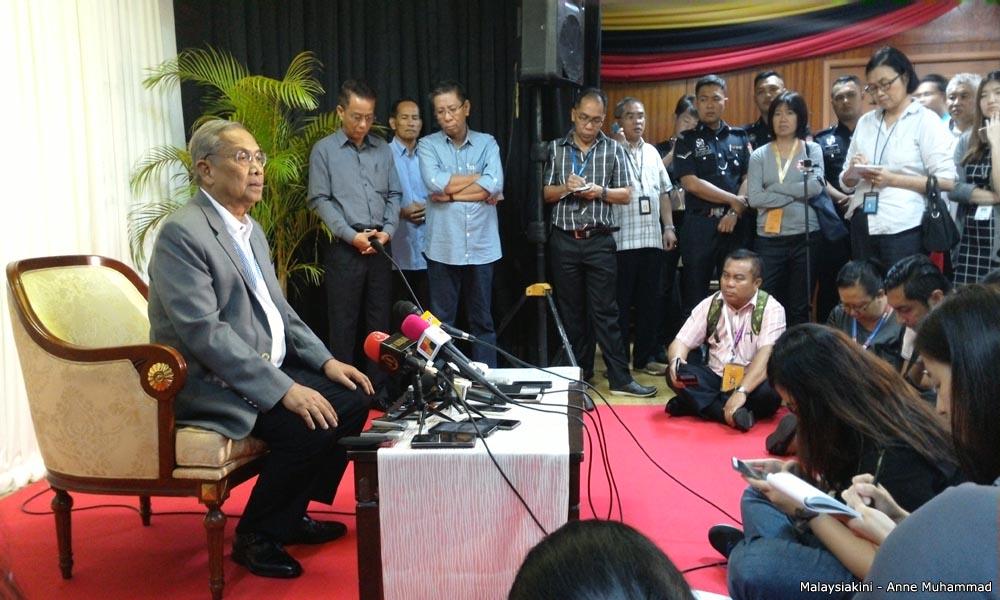 He says former Perlis Mufti Juanda Jaya, who was fielded in Jemoreng, is not like other conservative religious scholars.

"He's not only a modern ustaz. He's not narrow minded, very broad minded and very liberal. The kind of ustaz that we want.

"He's the kind of ustaz who will tell you what you can do and how to do it instead of saying no to everything and everything is haram.

"Besides it is a PBB tradition that one of its members ought to be a religious person," he says.

He also brushes off opposition accusation that voters were threatened to choose BN or lose their rice bowl.

"I don't expect the opposition to compliment me," he says.

Adenan also reiterates his commitment to autonomy and stresses that those barred from entering Sarawak were extremists.

10pm - Pelawan, Sibu: Locals are feted with a moment of nostalgia at a BN ceramah here.

A video featuring former Sibu MP Lau Hoi Chew is played at the ceramah, highlighting his contributions such as road infrastructure projects and assisting the mentally-challenged.

Lau, who was Janet's husband, was also deputy transport minister.

Taking the stage later, Janet, who at first introduces herself as a member of "Team Adenan", praises incumbent Sarawak Chief Minister Adenan Satem.

"Adenan told me, PBB can rule the state by itself without others, especially the Chinese-based parties, but he said he needs Chinese being in politics as we are all Sarawakians," she tells a 250-plus audience, mostly middle-age folk and elderly.

Janet also urges people to vote for her so that her husband's spirit can live on.

The ceramah is taking place in front of Sibu DAP headquarters.

The emcee blasts DAP's slogan that a vote for Adenan would be a vote for Prime Minister Najib Abdul Razak who is plagued by financial scandal.

“Najib may not fall if people vote for DAP, but Adenan may,” the emcee says.

9:45 pm - Third Mile, Kuching: PKR's candidate for Batu Kitang Voon Shiak Ni tells voters she has no choice but to press ahead with her campaign in the face of a clash with DAP.

"I cannot withdraw. I am obliged to follow my party's decision, for the greater cause," she tells some 300 people gathered here. 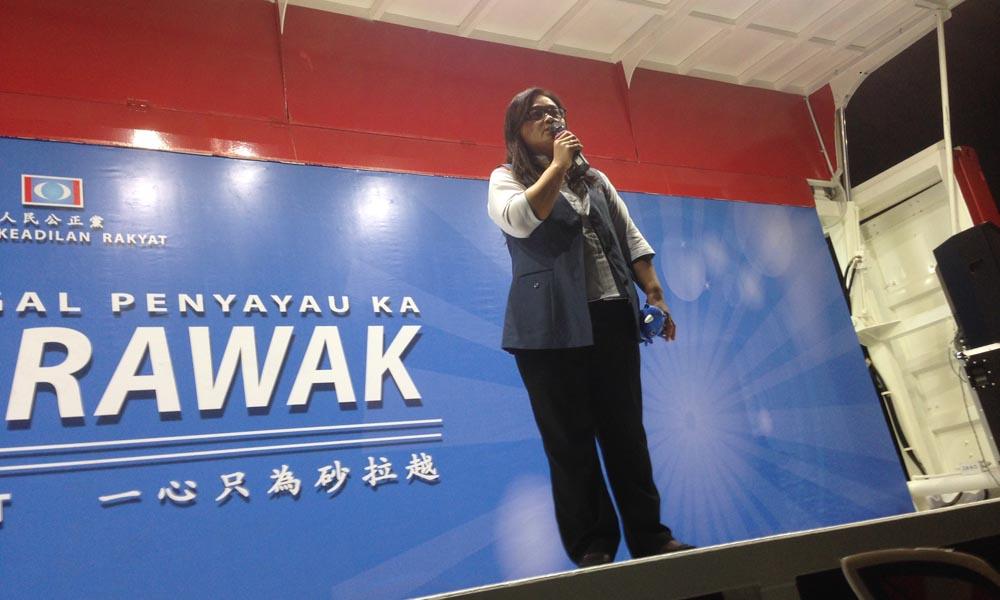 Voon adds that she genuinely did not expect DAP to field its candidate at the final moments of the nomination process.

"The seat is new but my service here is not. I have served this community for a decade, said Voon, a lawyer by trade.

Meanwhile, PKR incumbent for Batu Lintang See Chee How says the fielding of BN direct candidates, to the chagrin of BN component parties, shows the ruling coalition too lacked consensus.

"The whole direct candidates process showed that is no consensus among BN. It's all directed by Adenan," says See.

8.30pm, Taman Permai, Sibu: BN candidate Dr Annuar Rapaee shoos away a Malaysiakini journalist after being met following his ceramah in front of about 200 people at Taman Permai.

He scolds the journalist after the reporter introduced herself as being from Malaysiakini .

The incumbent for Nangka then tells the journalist to leave the area.

Annuar is believed to be unhappy with the journalist for highlighting complaints from residents from Kampung Dato Lama . 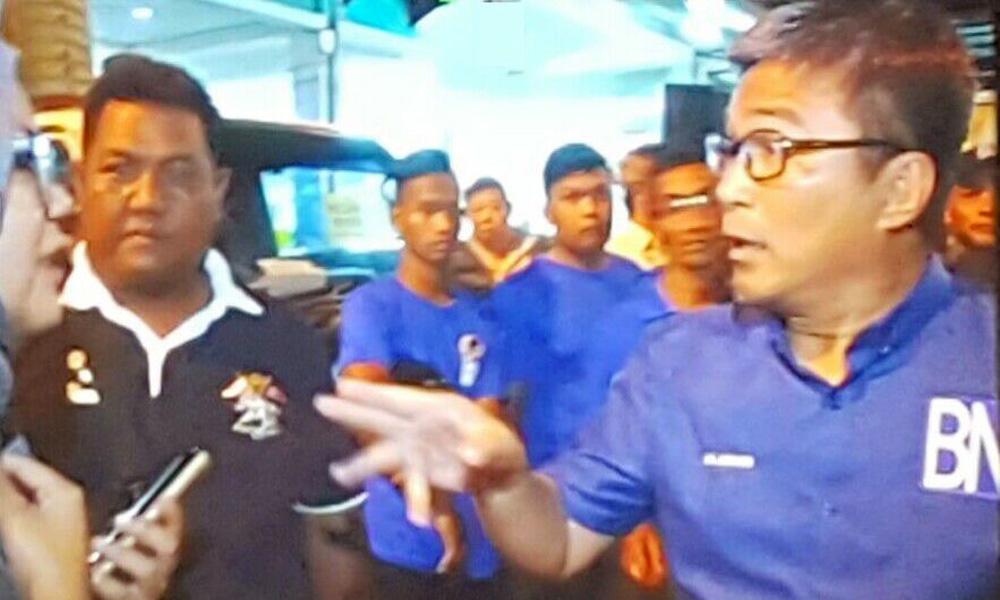 Malaysiakini had sought Annuar's response to the residents' complaints but he had refused to comment, merely saying: "I'm sorry, thank you".

However, Annuar now claims he never spoke with the journalists or was ever asked about the issue.

His supporters shove the journalist away.

"I asked him to help me get public housing, like a 1Malaysia house.

"You need land for that, but I don't have land and my request to get land was rejected before," the 50-year-old tells reporters at the Pujut Corner market.

The mother of four and grandmother of two adds she doesn't know which channels to go through to make her wish to own a house come true.

Asked how he would help her, Hii replied: "I always help the people."

He adds that win or lose, he will continue to serve the people of Miri.

Themed “wealth-sharing for all Sarawakians”, the manifesto focuses on the fair redistribution of wealth in Sarawak.

1.30pm - Miri: Incumbent Senadin assemblyperson Lee Kim Shin is crying foul after being bombarded with calls asking if he is giving money for people not to go out and vote.

"This is not true at all and irresponsible. Whoever spread this rumour has bad intentions and wants to confuse voters.

"I'm not stupid enough to tell people not to vote. How can you win if people don't vote?" Lee says at a press conference in his office.

He says he has informed the police about this and urges those who have received such offers to lodge police reports.

Asked on the PKR-DAP clash, he replies: "We are focusing on BN. We have bigger fish to fry. We are moving on." 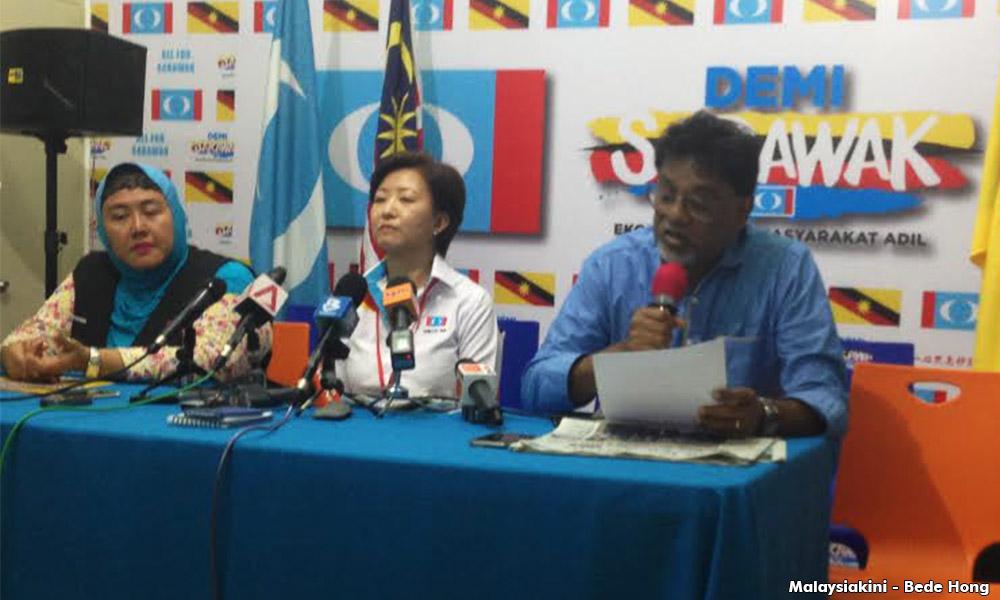 "BN is nervous about their situation," Xavier ( right in photo ) adds, citing the clashes between BN components SUPP and SPDP, and their splinter parties, UPP and Teras.

Meanwhile, the party's joint operations director, Lynette Tan, calls on all BN candidates to declare their position on the 25 parliamentarians from BN Sarawak who voted for GST in Parliament on April, 2014.

One man who joins him for drinks at a nearby shop complains that elected representatives never do their jobs.

"Before they win, they promise so many things, but after that they don't do a single thing.

"It doesn't matter what party you're from as long as you serve the people," the man who did not want to be named, says.

Jofrie had earlier spent time handing out manifestos at the market, where there is a mix of Chinese and bumiputera constituents.

However many are unfamiliar with him, and only recognise the logo of PAS. 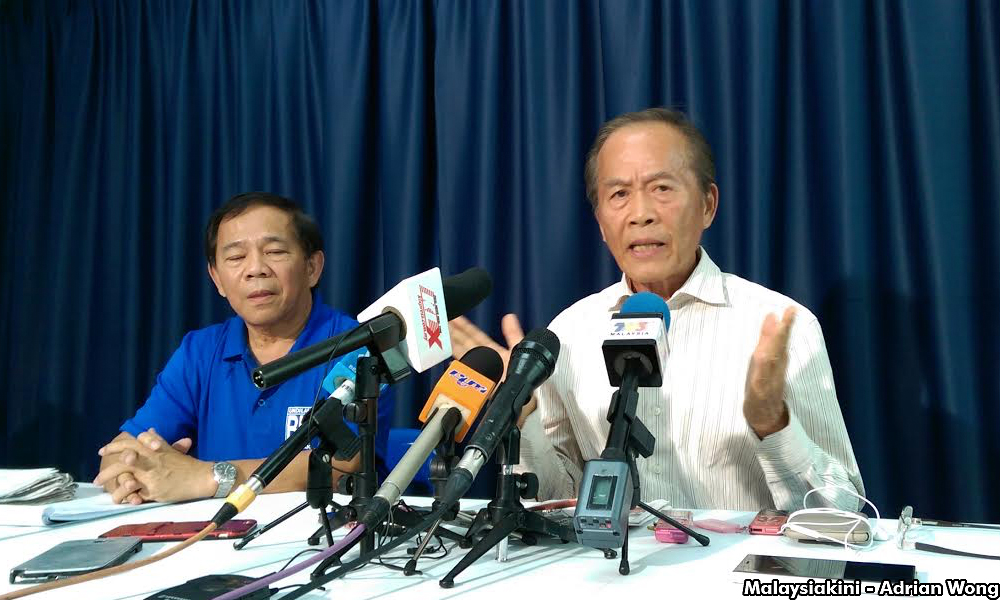 10.30am - Sibu: BN direct candidate Tiong Thai King blames the 1MDB debacle on the opposition , whom he says did not keep the government in check.

10.10am - Batu Kawah, Kuching : Many local voters get confused on which state seats they are supposed to vote after the redelineation exercise.

"Please help me to check where am I to vote," says a shopkeeper who bumps into Batu Kawah incumbent Christina Chiew, who is having a walkabout at the Kuching City Mall Commercial Centre today.

Chiew urges the voters to check with DAP operation room or the election commission website .

"It will be chaotic on the polling day, so far many people have asked where should they vote." 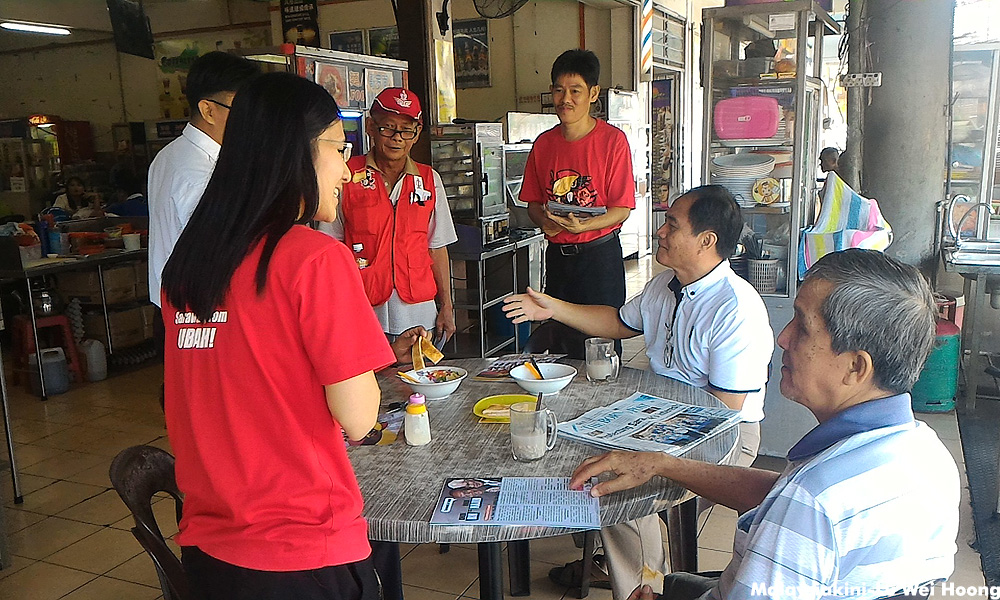 Batu Kawah, together with Kota Sentosa, gave away their portion to form the new seat of Batu Kitang in the latest redelineation exercise.

10.00am - Long Lama, Baram : Seehua Daily reports that residents at a longhouse here have decided to split the building in two, citing their political differences.

“They can’t swallow their pride and ultimately decided to break the longhouse in two and go their separate paths, and also avoid further conflict,” the daily reports, adding that such occurrence has happened in Baram before.

Long Lama is part of the Telang Usan state constituency, where analysis of the 2013 general election data shows that BN is about 704 votes behind PKR – not accounting for advance and postal voting.

Deputy Prime Minister Ahmad Zahid Hamidi is expected to make an appearance in Long Lama itself on the coming Friday to help drum up support, while Prime Minister Najib Abdul Razak is slated to do the same elsewhere in Telang Usan on the following day. 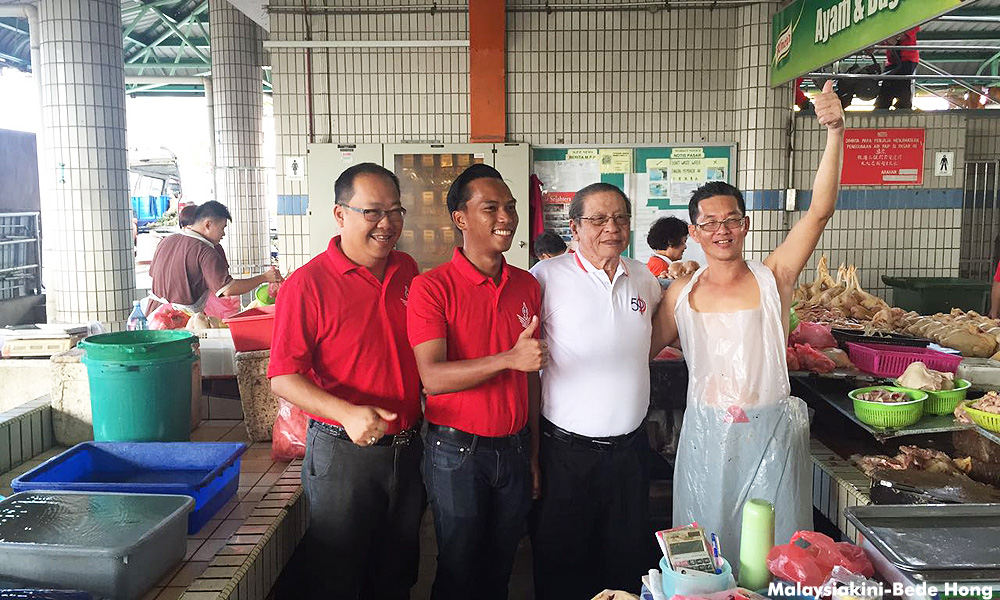 Market sellers and fishmongers appear familiar with Abdul Aziz, but engage in full-on conversations with Lim, complaining about rising costs.

Some vendors took the chance to criticise the Padawan municipal councilors for not showing up and resolving issues like blocked drainage and broken light fixtures.

9.15am - Kuching: The state police have identified Batu Kawah, Bawang Assan, Pakan, Tasik Biru and Tanjung Batu as five of the 20 hot seats in the May 7 state poll.

The cops will pay more attention to both security and safety in the identified hot seats, he said.

A total 29 ceramah permit applications were received by the police on Monday, with 27 ceramah subsequently held, he added.

Mohd Haris stressed that the police will not reject any application so long as it fulfils all the necessary requirements.

8.30am - Miri: BN's candidate for the Pujut seat Hii King Chiong had a friendly run-in with the DAP trio gunning for Miri's three urban seats during a walkabout here today.

The four met at a food court near the Krokop 10 market, where both sides were doing meet and greets. 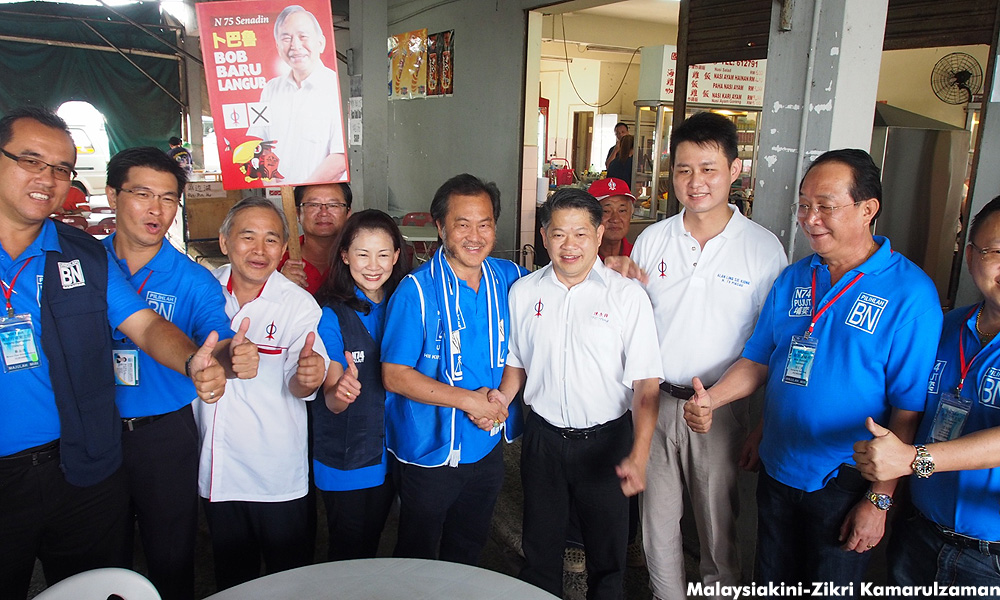 However, the lone BN man appears to be slightly more popular than the trio, with more people walking up to him to air their grouses – on roads, drains and even the location of fans in the market.